Surging Gun Violence: Where We Are, How We Got Here, and Where We Go Next

In many communities across the country, gun violence has been an unrelenting drumbeat. In a single deadly day, gun violence claimed the lives of a 31-year-old father in Port Allen, Louisiana; a 43-year-old in Philadelphia, Pennsylvania, who was known as a stylish dresser with a great sense of humor; an 11-year-old in Columbia, Missouri, who loved to dance and play with her cousins; and a 17-year-old in Columbus, Ohio, who was a gifted boxer.

Each day, hundreds of lives like these are lost or irrevocably changed as this crisis rages on.

But in the last two years, the tempo of this beat has gotten faster. Gun violence has skyrocketed in cities and towns across the country, leaving more devastation and more trauma in its wake.

More than 45,000 Americans were killed in acts of gun violence in 2020—a 15% increase over the previous year. This increase was primarily driven by an unprecedented 35% rise in gun homicides. In fact, more people were lost to gun violence in 2020 than any other year on record, and although final data is not yet available, the gun death total in 2021 is likely to surpass these records.

This drumbeat is ever-present, but one to which too many have become numb. For too long, this epidemic has gone unchecked, and even as it has spiraled out of control, too many leaders are choosing to do nothing. This moment demands attention, and we must do more to mitigate these increases and protect communities in crisis.

This report provides data describing how gun violence has skyrocketed in 2020 and 2021, showing that this historic rise in gun violence has primarily served to intensify this crisis in communities that already suffered the greatest burden. Additionally, this report describes and considers the factors that most likely contributed to these increases, based on available evidence, and makes suggestions for how policymakers can best respond to this unprecedented challenge.

We hope that this report can help guide a more nuanced and evidence-informed conversation about how to tackle this problem that will lead to the implementation of tangible, sustainable measures to address it. 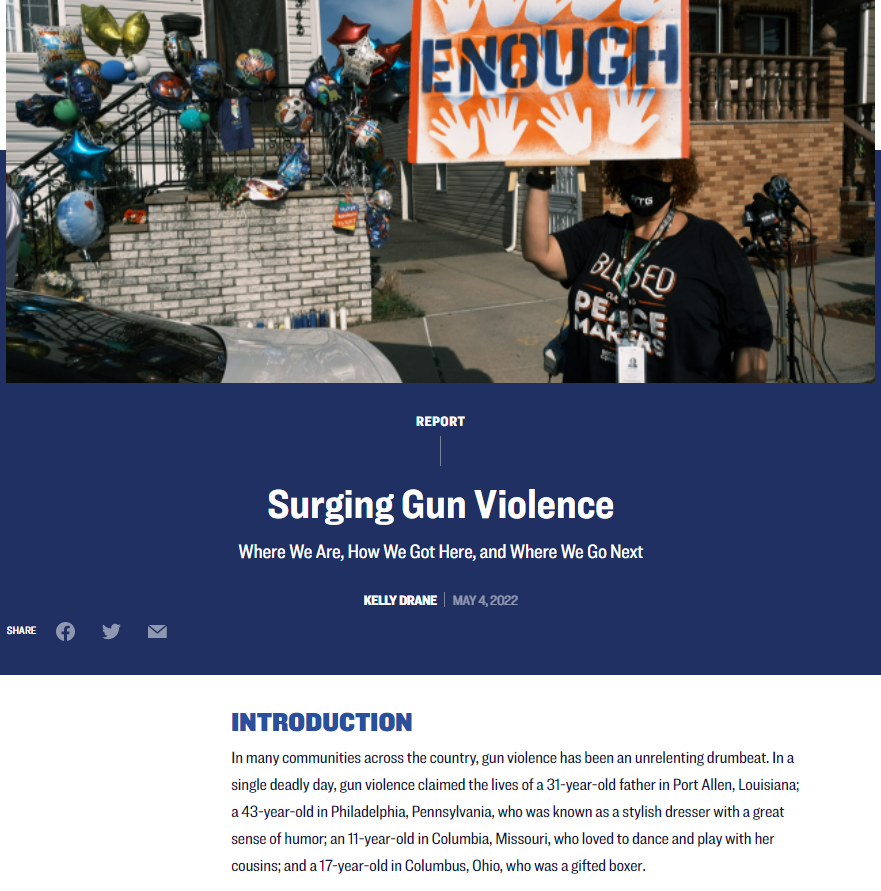