Embedding race equity principles into supports provided for young people who age out of foster care can better prepare them for a successful transition into adulthood. Child welfare practitioners and policymakers must consider how race and racism affect a young person's child welfare experience and the services and supports they receive. For example, practitioners and policymakers should understand how employment program outcomes vary by race/ethnicity, or the ways in which access to culturally competent sexual and reproductive health care varies by race/ethnicity. This focus on race equity principles ensures that all young people have access to services tailored to their needs.

For practitioners and policymakers to accurately interpret data and make decisions about programming for all racial and ethnic groups, researchers must be able to capture someone's racial and ethnic identity alongside their outcomes. One common resource available to researchers who want to examine outcomes over time is panel, or longitudinal, data, for which the same people are repeatedly and regularly surveyed over an extended period of time. However, researchers should carefully consider how they use these data in analysis because individuals' responses to race/ethnicity and other demographic variables may change over time. When researchers treat race/ethnicity as an unchanging variable they potentially miss important equity considerations.

In this brief, we first provide some background on racial and ethnic identity formation and describe some of the barriers to this identity formation process that child welfare system involvement may create for young people. Next, we qualitatively explore, through interviews with former foster youth, why racial and ethnic identity may shift during emerging adulthood, particularly among young people with foster care experience. The interviews provide context on the importance of honoring a young person's chosen identity as that identity shifts. We then explore the practical implications of these identity changes for researchers by quantitatively demonstrating how small decisions made while preparing longitudinal data for analysis can produce completely different results.

After describing patterns of racial and ethnic changes observed in our dataset, we then undertake what we call a "three-approach analysis" in which we repeat the same analysis three different ways, with the only change being how we prepare the racial and ethnic data. We conclude by discussing the equity implications of being transparent and detailed when describing how racial and ethnic identity data is used in research studies. 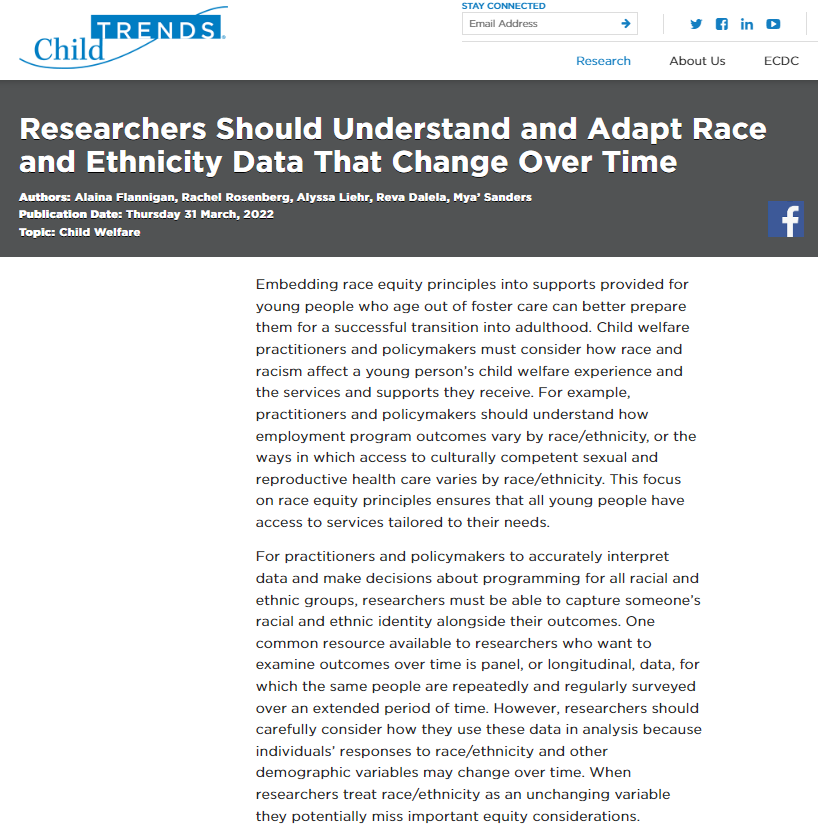