Key facts about the quality of the 2020 census

This post analyzes results from the two basic means the Census Bureau has used to estimate census coverage for the last seven censuses – the bureau's Demographic Analysis and its Post-Enumeration Survey. Demographic Analysis (DA) constructs a national estimate of the U.S. population by age, sex, race and Hispanic origin using historical data on births and deaths, federal data on international migration and Medicare records. DA uses the basic demographic accounting equation that the total population is equal to births minus deaths, plus immigration, minus emigration. Birth and death records for 1945-2020 are used to estimate the U.S.-born population under age 75 for Census Day, April 1, 2020. International migration estimates employed a number of data sources, but mainly the American Community Survey for the foreign-born population younger than 75. Finally, administrative data from the Medicare program, adjusted for under-enrollment, was used to estimate the population ages 75 and older on Census Day since these cohorts were born before 1945 when vital records were less complete.

Although the main data for DA is administrative records, not sample surveys, there are a number of sources of potential uncertainty, including, for example, registration completeness, classification errors and differences in reporting between the 2020 census and the external data sources. To account for this uncertainty, the Census Bureau produced three alternative estimates – low, middle and high – reflecting alternative assumptions about births, international migration and Medicare enrollment.

The Post-Enumeration Survey (PES) in 2020 is a sample survey of about 10,000 census blocks that ultimately included almost 400,000 people. About 160,000 households were interviewed to determine where they lived on Census Day and their basic demographic characteristics. The people in these households were then matched to census records to determine who was counted correctly, missed or counted in error. The PES sample includes only households; it excludes people living in group quarters (such as college dorms, prisons and nursing homes) and the small number of people living in Remote Alaska areas. Consequently, the PES coverage estimates apply to a household population count of 323,200,000 and not the full census count of 331,400,000. As a sample survey, the PES is subject to sampling error, so the Census Bureau reports the PES results with a margin of error.

The estimates of the amount of net undercount shown in the final chart were developed by the Pew Research Center using two main data sources: the Census Bureau's PES estimates of the percentage undercount for racial and Hispanic groups in 2010 and 2020 applied to the P.L. 94-171 census counts for these groups. 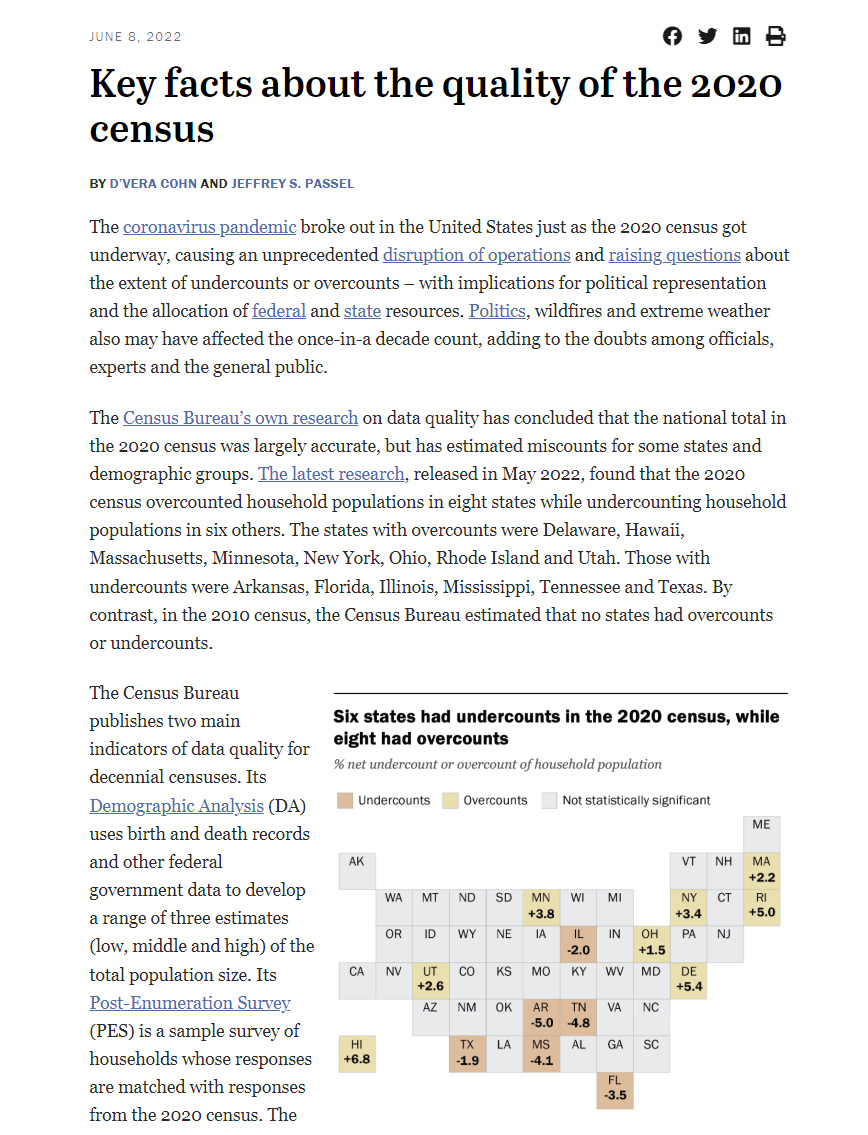