Those of us who track the effects of global warming had assumed that the first large flow of climate refugees would likely be in the South Pacific with the abandonment of Tuvalu or other low-lying islands. We were wrong. The first massive movement of climate refugees has been that of people away from the Gulf Coast of the United States. Hurricane Katrina, which made landfall in late August 2005, forced a million people from New Orleans and the small towns on the Mississippi and Louisiana coasts to move inland either within state or to neighboring states, such as Texas and Arkansas. Although nearly all planned to return, many have not. Unlike in previous cases, when residents typically left areas threatened by hurricanes and returned when authorities declared it was safe to do so, many of these evacuees are finding new homes. In this respect, the U.S. hurricane season of 2005 was different. Record-high temperatures in the Gulf of Mexico surface waters helped make Hurricane Katrina the most financially destructive hurricane ever to make landfall anywhere. In some Mississippi Gulf Coast towns, Katrina's powerful 28-foot-high storm surge (8.5 meters) did not leave a single structure standing. There was nothing for evacuees to return to. The destruction of housing and infrastructure in St. Bernard Parish, a low-lying 40-mile-long peninsula (64 kilometers) extending southeast from New Orleans, rendered most of it uninhabitable. The Katrina storm surge that raised the water level in Lake Pontchartrain so high that it breached the levees and flooded New Orleans left much of the city unfit to live in. Even today, a year later, large parts of the city are without basic infrastructure services such as water, power, sewage disposal, garbage collection, and telecommunications. Interestingly, the country to suffer the most damage from a hurricane is also primarily responsible for global warming. Many evacuees were able to return in a matter of days, but many more were not. New Orleans' population before Katrina struck was 463,000. Claritas, a private demographic data-gathering and analysis firm, reported that after the hurricane New Orleans' population shrank to 93,000. By January 2006, it had recovered to 174,000. By July 2006, the city still had only 214,000 residents, less than half of its pre-Katrina population. Three Louisiana coastal parishes (counties) also registered substantial population declines. The population of St. Bernard Parish plummeted from 66,000 residents to 15,000 in July 2006. South of New Orleans, the population of Plaquemines Parish declined from 29,000 to 20,000. Densely populated Jefferson Parish, also bordering New Orleans on the south, dropped from 453,000 to 411,000, a loss of 42,000. Mississippi's three coastal counties each lost population. The July tabulation showed Hancock County had lost 8,000 residents. Harrison County, which includes the town of Gulfport, lost 12,000, and Jackson County 4,000. (See data at http://www.earthpolicy.org/Updates/2006/Update57_data.htm) 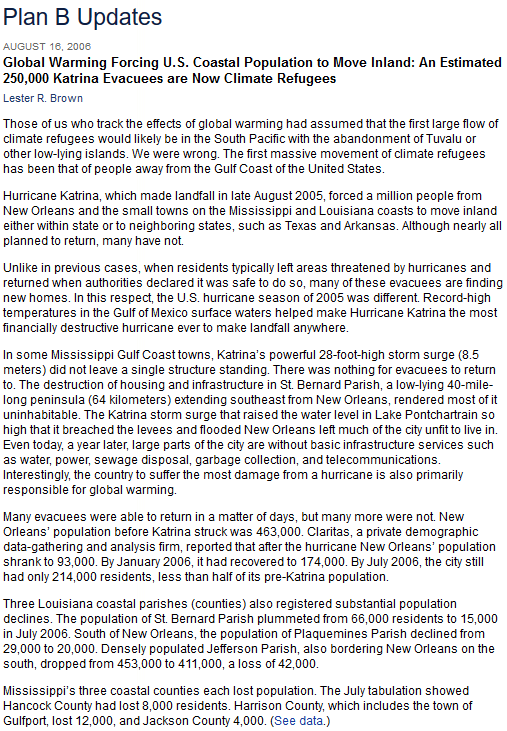