Concealed Carry Is Linked to Increased Gun Violence in Wisconsin

In November 2011, a new law went into effect in Wisconsin that dramatically changed the state's approach to public carry of firearms. For the first time, individuals in Wisconsin were allowed to carry concealed firearms in their community after obtaining a concealed carry weapons (CCW) permit from the Wisconsin Department of Justice. The law established relatively minimal eligibility requirements for a permit: Applicants must be a state resident; be at least 21 years old; not be prohibited from gun possession under federal and state law; and fulfill minimal training requirements, such as presenting a hunter education certificate or a current or an expired CCW license from another state. Permits are valid for five years and can be renewed without completing any additional training. Also, the law does not provide the state Department of Justice with any discretion in determining whether to issue a CCW permit: If an individual meets the minimum statutory eligibility requirements, the agency must issue the permit. According to data from Wisconsin's Department of Justice, from 2011 through 2020, 706,575 applications for concealed carry permits were issued and only 14,575 applications were denied after the applicant failed a background check

Although the law passed roughly a decade ago, there is a dearth of research addressing its potential effects on public safety in Wisconsin, in part because the law includes limitations on access to such data. However, an analysis of publicly available data from local agencies, the FBI, and other national databases suggests that the CCW law has led to negative consequences for safety in the state. Three categories of violent gun-related crime have increased since its implementation: gun homicides, aggravated assaults that involve a gun, and gun-related homicides and assaults against law enforcement officers. In addition, gun theft in Wisconsin has increased dramatically. The law is also associated with a significant rise in gun sales, particularly handguns, in the state, suggesting that it may have incentivized more Wisconsin residents to become gun owners.

These data provide more than sufficient evidence for lawmakers in Wisconsin to take a second look at the CCW law and take action to strengthen it. Even as states across the country move to weaken laws related to carrying guns in public—with some going so far as to eliminate permit requirements altogether, whether for open or concealed carry--Wisconsin's experience provides an instructive example of the potential harms caused by such an approach. 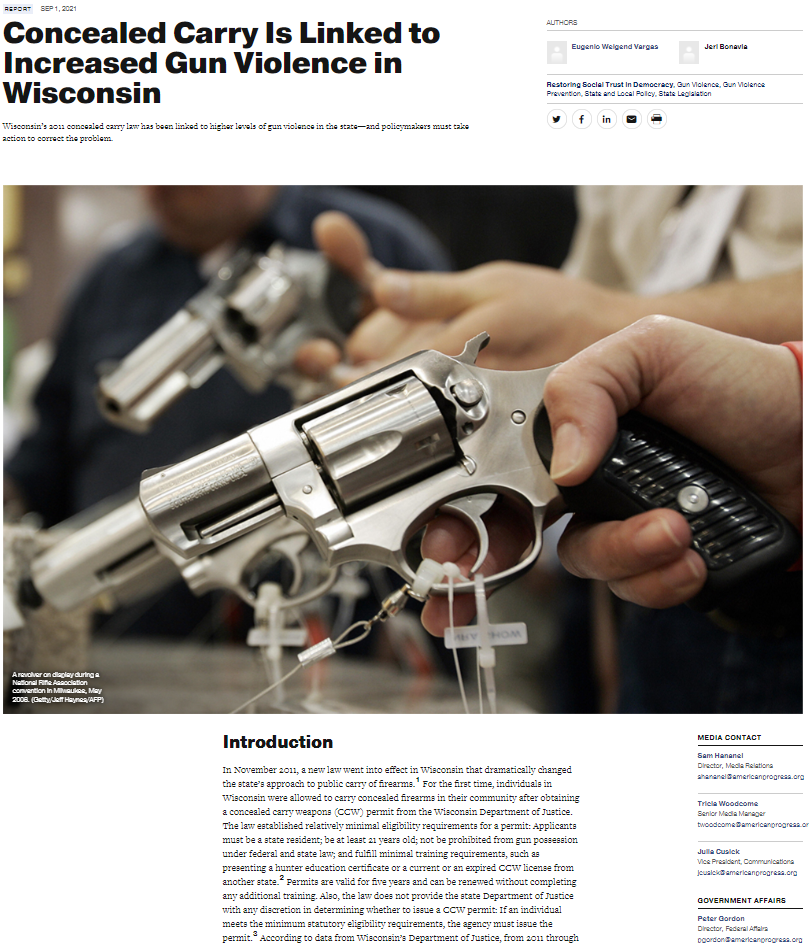