Nevada has been the site of both tremendous tragedy and significant progress when it comes to gun violence. The state was the location of the worst mass shooting in modern U.S. history, when a gunman opened fire on concertgoers at the Route 91 Harvest music festival in Las Vegas on October 1, 2017, killing 59 people and injuring more than 500 others. The state was also home to one of the most notorious standoffs between armed violent extremists and federal law enforcement officers at the Bundy ranch in 2014—an event that foreshadowed the recent rise in violent anti-government extremist efforts. Nevada experiences some of the highest rates of gun violence in the nation, with the 14th-highest rate of firearm deaths from 2009 through 2018. In addition, Nevada suffers from a gun death rate that is 40 percent higher than the national average. The state also has a substantially elevated gun suicide rate—60 percent higher than the national average. The burden of gun violence is not felt equally across Nevada communities: While only 9 percent of the state's population identifies as Black, Black victims represent 34 percent of overall gun murder victims. Nevada's youth are disproportionately affected by gun violence, and shootings are the leading cause of death for young people in the state.

Despite these sobering statistics, Nevada has also been a bright spot on the map when it comes to enacting strong new gun laws in the wake of tragedy. In 2016, Nevada voters approved a ballot measure to enact universal background checks in the state, and in 2019, the Legislature approved a number of gun violence prevention bills, including one to ban bump stocks, the deadly device used in the Route 91 attack that mimics the rate of fire of a fully automatic firearm. The Legislature also passed a bill creating an extreme risk protection order, enabling family members or law enforcement officials to seek a court order to temporarily remove firearms from someone deemed a threat to themselves or others, and strengthened the law to prevent children from having easy access to firearms.

While these laws are critical parts of the solution to address gun violence in Nevada, many gaps in state law remain. Overall, the state only earns a C+ grade for the strength of its gun laws from the Giffords Law Center to Prevent Gun Violence's annual gun law scorecard. More can be done to protect the lives of all Nevadans. If enacted, these six recommendations for additional gun safety laws in Nevada would help keep all communities across the state safe from gun violence. With Nevada's Legislature only in session every other year, it is crucial that it consider these measures during the upcoming session beginning in February. 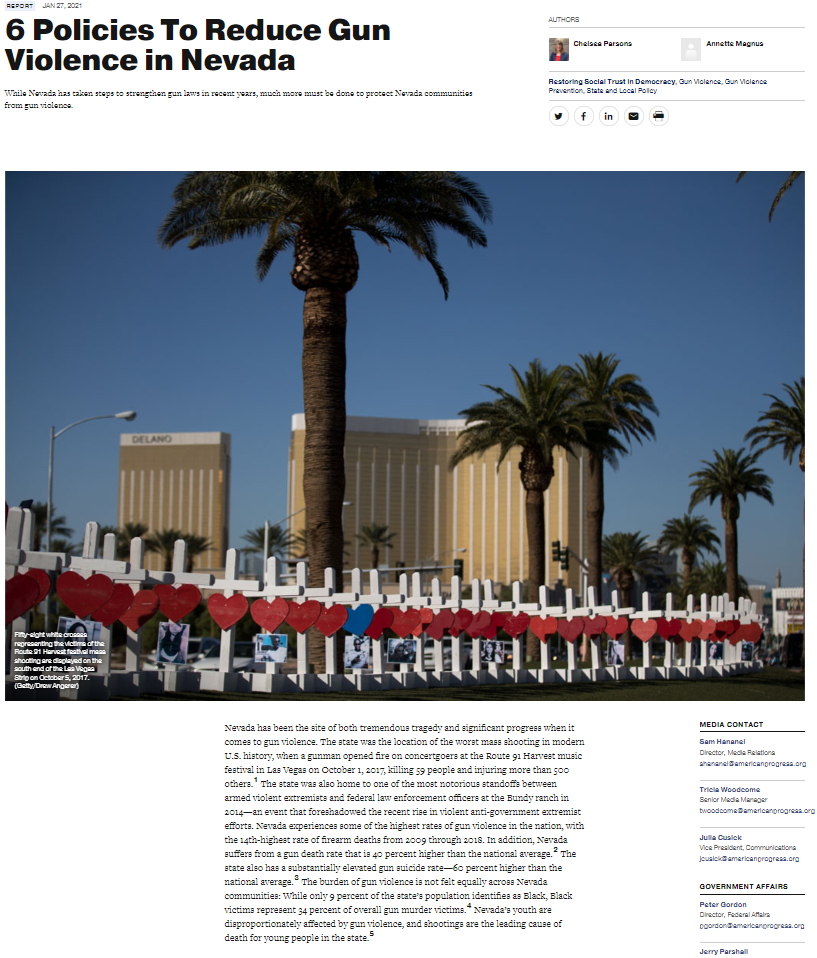