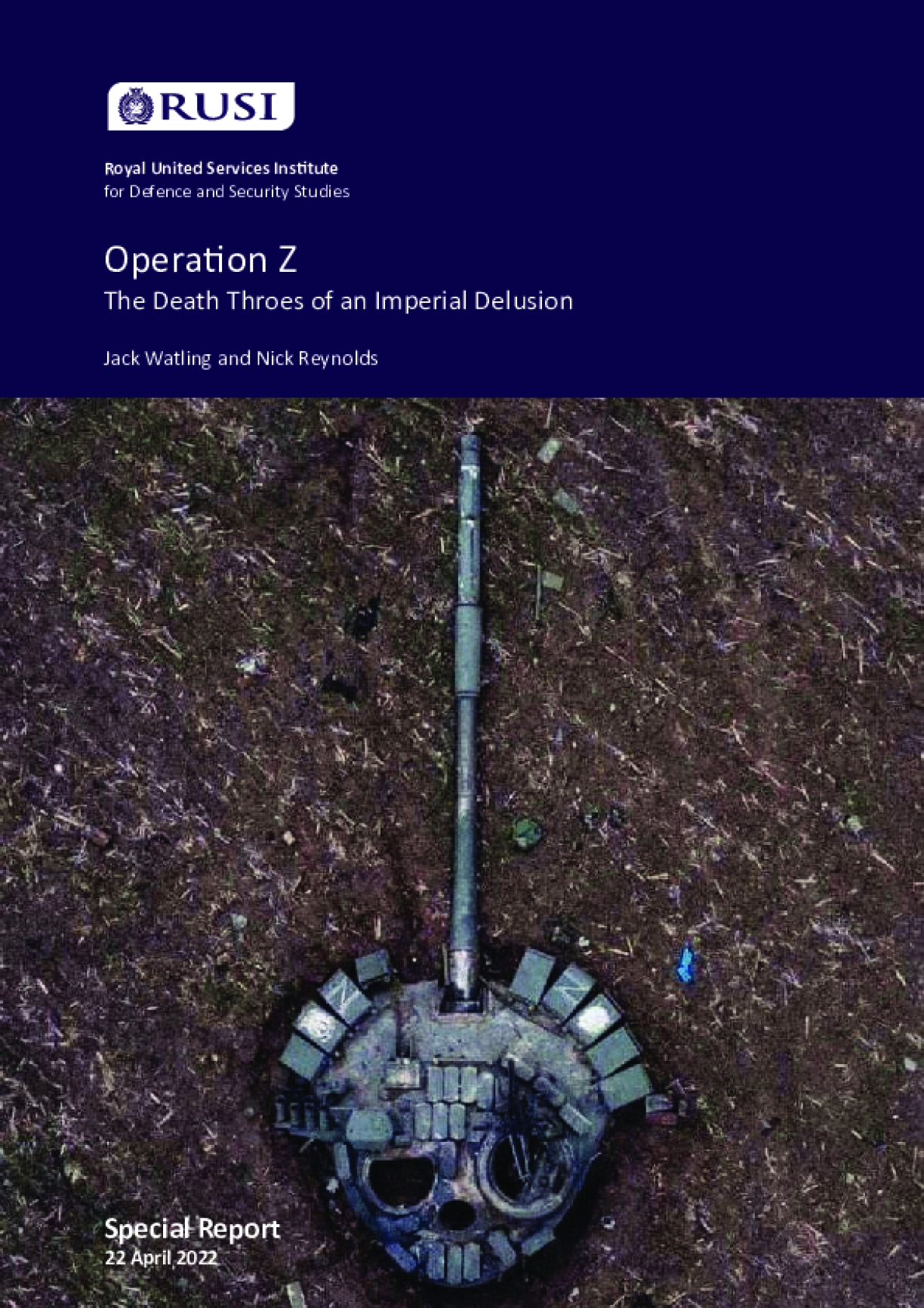 Operation Z: The Death Throes of an Imperial Delusion

When Russian forces began to roll towards the Ukrainian border on the evening of Defender of the Fatherland Day, 23 February, Moscow was anticipating the capture of Kyiv within three days. Many outside observers – including the authors of this report – feared the destruction of the conventional Ukrainian military, even if they expected the fighting to last longer than Moscow had hoped. Moscow's plan was for repressive measures to have stabilised control of Ukraine by Victory Day on 9 May. Instead, the Russian military was repulsed, suffering heavy losses, and is now embarking upon a limited offensive to try to secure Donetsk and Luhansk.The war in Ukraine has generated a considerable volume of highly detailed analysis relating to the military progress of the campaign, the struggle for information, the cascading economic effects of high energy prices and supply chain disruption, and the geopolitical fallout as countries are increasingly called upon to pick a side. However, despite an emphasis in Western security concepts on the need for a whole-of-government approach, much of the analysis on the war in Ukraine has focused on narrow silos. This Special Report seeks to examine how the interconnected challenges confronting Moscow are reshaping Russian policy, and the risks Moscow's potential courses of action pose as the war enters a new phase. The foremost conclusion is that Russia is now preparing, diplomatically, militarily and economically, for a protracted conflict. This report is based on a wide range of sources. On the military front the report draws upon sustained though periodic engagements with Ukrainian combatants in the conflict and independent reporters observing the fighting on the ground, continual analysis of open source information from the war, and intermittent interviews with senior Ukrainian officials and officers during fieldwork in March and April. The diplomatic and economic analysis draws upon interviews with Ukrainian and Western intelligence officials, energy experts including former employees in Russia's strategic industries, and diplomats and national security representatives from several NATO and non-NATO member states that have maintained links with Russia. The report also draws upon inspections by the authors of Russian military equipment recovered from the battlefield during fieldwork in April, and an extensive set of documents from inside the Russian government. Owing to the sensitivity of the methods by which these documents were obtained their sourcing is largely withheld, though the authors took steps to establish their veracity. 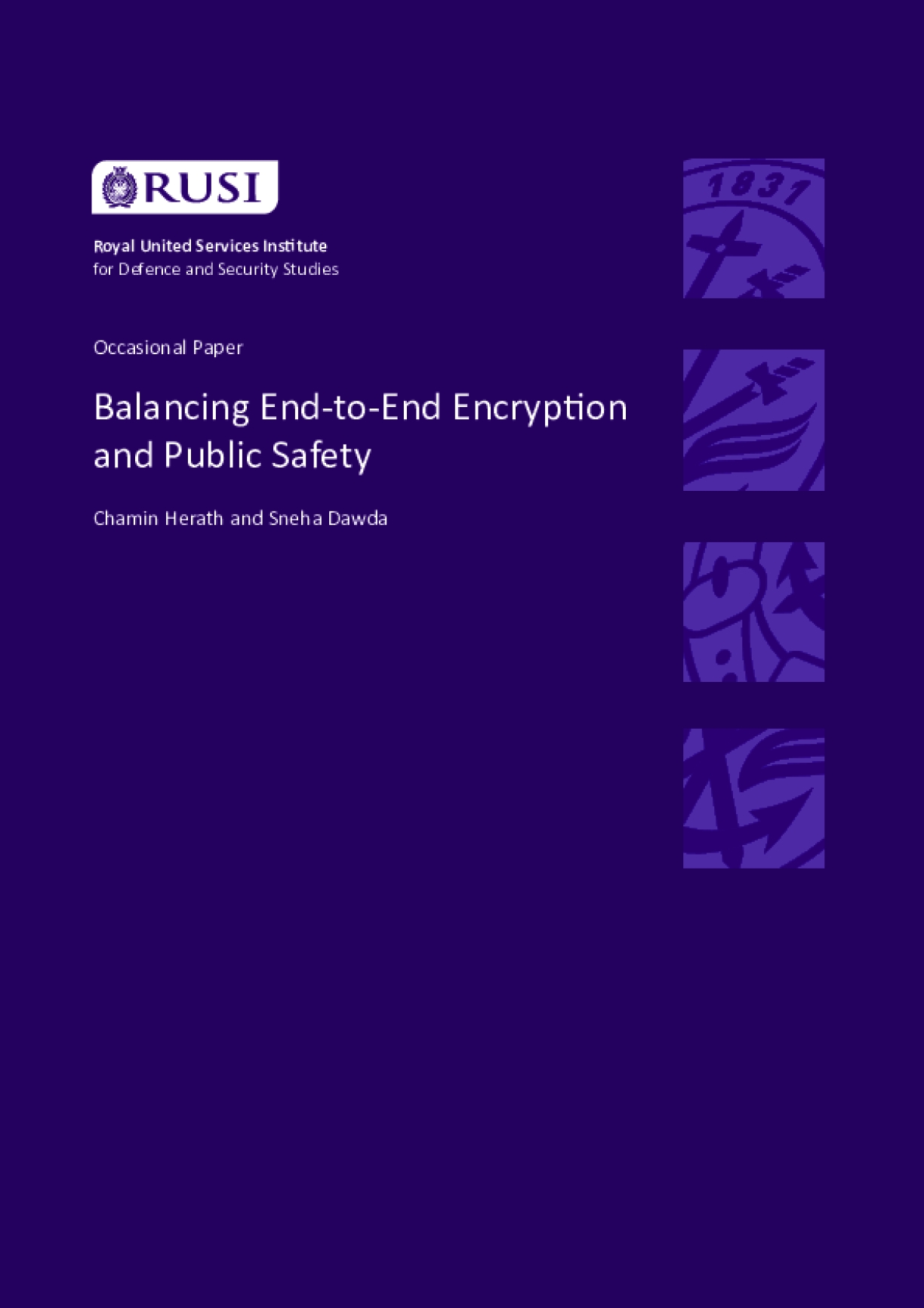 Over the last decade, there has been a significant debate around end-to-end encryption (E2EE) and its implications for public safety. At the forefront of the discourse is a false dichotomy between protecting privacy and ensuring national security. At the extreme ends of this deeply polarised debate are two key arguments. On the privacy side, it is believed that governments and law enforcement agencies desire unrestrained exceptional access to E2EE communications to spy on their citizens. On the security side, it is maintained that obtaining lawful exceptional access is the only way to protect citizens and uphold national security. The debate has reached a deadlock, with both sides perpetuating zero-sum views.However, experts are calling for a more nuanced conversation about possible solutions to the criminal use of E2EE services. It is vital that a range of views are considered in order to identify the key issues and inform a more productive debate. Through a review of the existing literature and insights from 22 semi-structured interviews, this paper balances the perspectives from a range of relevant stakeholders on the main elements of the E2EE debate and presents some key takeaways in an effort to move away from a crude privacy-versus-security binary.The paper presents the following key findings:There are clear and significant cyber security and privacy benefits to E2EE. Efforts to weaken or restrict its access would be a net loss for all.Criminal use of E2EE is a significant risk to public safety and solutions are vital. Yet, it should also be acknowledged that technology is an enabler of criminal and harmful activity and should not be treated as the root cause.The possibility of developing technical tools which could assist law enforcement investigations should not be categorically ruled out, but future proposals must be measured against the principles of proportionality, legality and technical robustness.Alternative options for law enforcement investigations such as metadata analysis and legal hacking should be considered, but they are not without their drawbacks. Legal hacking could be proportionate but its reliance on software vulnerabilities is largely at odds with strong cyber security. Metadata analysis is promising but more research is needed to determine the extent to which it can be used to aid law enforcement investigations.Industry do have a responsibility to make their platforms safer and free from criminal abuse. This requires implementation of safety-by-design principles and the provision of resources for better digital literacy and education. Governments must have oversight over the technical tools developed.A more nuanced debate must continue which actively moves away from zero-sum views of absolute privacy versus absolute security, and focuses more on how the risks to public safety can be reduced in proportion with the need to protect citizens' rights and freedoms. 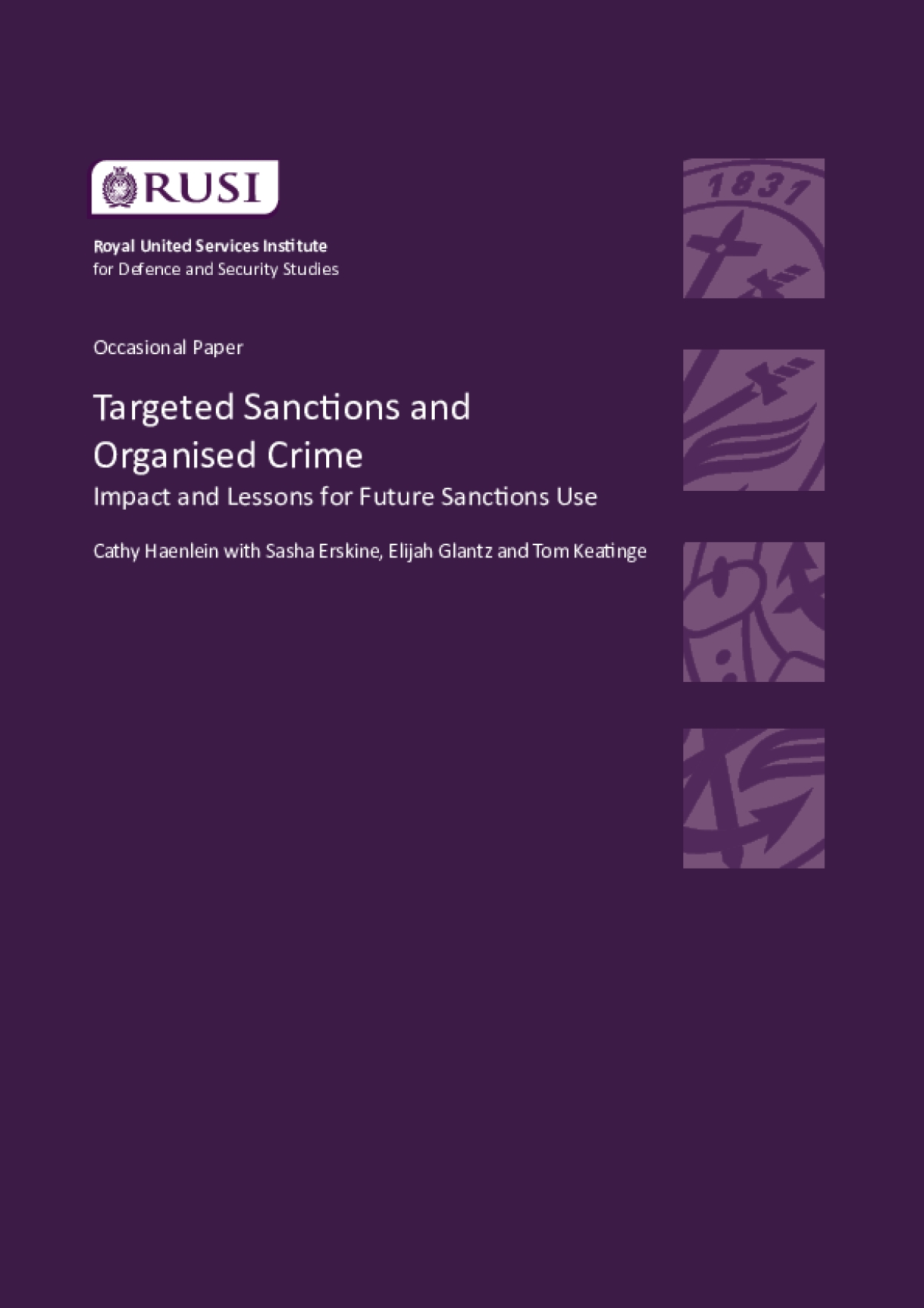 Sanctions are increasingly being used to tackle a range of specific issues. These include sanctions to respond to human rights abuses, combat corruption and address malicious cyber activity. As sanctions use has broadened, the question of their application to organised criminal activity has been increasingly raised. Yet, the use of sanctions against organised crime has remained limited to a specific set of issuers, notably the US and, more recently, the UN.In the UK, the government has advanced its vision of an ambitious post-Brexit independent sanctions regime, with the Sanctions and Anti-Money Laundering Act 2018 allowing sanctions use 'in the interests of national security'. New regimes addressing human rights and corruption have emerged. With serious and organised crime deemed a national security threat by the UK government, there is a case to add a sanctions regime to address this particular threat. The National Crime Agency itself has called for a legislative amendment to reference serious and organised crime as grounds for sanctions use.However, little research or evaluation has been undertaken to assess the impact of sanctions against organised crime. With US sanctions used over almost three decades to disrupt cross-border trafficking, the lack of a body of rigorous relevant research is a key shortcoming. Similarly, few past initiatives have sought to assess the lessons these experiences hold for future sanctions issuers in this space. With interest mounting in the potential use of organised crime-related sanctions, this represents a critical limitation.This paper represents the first effort to target this knowledge gap, by reviewing existing evidence on the use and impact of sanctions to disrupt organised criminal activity. It focuses on two case studies, Colombia and Libya, in differing regions of the world and with different exposure to organised crime-focused sanctions. While Colombia tops the list of states globally for organised crime-focused sanctions on individuals and entities in its territory (with the third-highest number of relevant listings since 2016), Libya's exposure is more recent and limited. Libya nonetheless has experience of listings under UN and US country regimes relating to fuel smuggling, people smuggling and human trafficking. Here, it differs markedly from Colombia, which is the epitome of the historic US approach to narcotics-related sanctions.This paper analyses organised crime-related sanctions data, examines the current state of knowledge on the implementation and impact of these sanctions, and draws on the two case studies. It identifies a number of factors that influence the impact of organised crime-focused sanctions, including:The extent to which the host government of the sanction's target is willing to cooperate with the sanction's issuer.The extent to which the issuance of sanctions is embedded within a coherent broader strategic approach.The overarching focus of the regime within which relevant designations are made.The degree of clarity of objective and purpose of the issuer when applying sanctions against organised criminal actors.Resourcing and engagement of key agencies in both the country of issuance and the target's host country.The targeting strategy adopted, and the extent to which this accounts for the divergent levels of vulnerability of key actors across the illicit trade chain.With these factors and the research's broader findings in mind, this paper concludes with a set of 10 considerations for those countries that may, in the future, contemplate introducing organised crime-focused sanctions:The need to identify where new issuers could have greatest impact.How sanctions fit into broader strategic approaches to countering organised crime.The criteria to be adopted to guide their use.The resourcing required to administer sanctions effectively.The need to balance sanctions use with interventions that address drivers of organised crime.The necessity of creating a dedicated new regime versus using existing regimes.The way in which sanctions address the role of state versus non-state actors in organised criminal activity.The need to ensure that sanctions use does not impede longer-term criminal justice outcomes.The need to account for due process concerns.Individual states should consider how action in this area could offer an alternative to the gridlock in the UN Security Council around sanctions use. 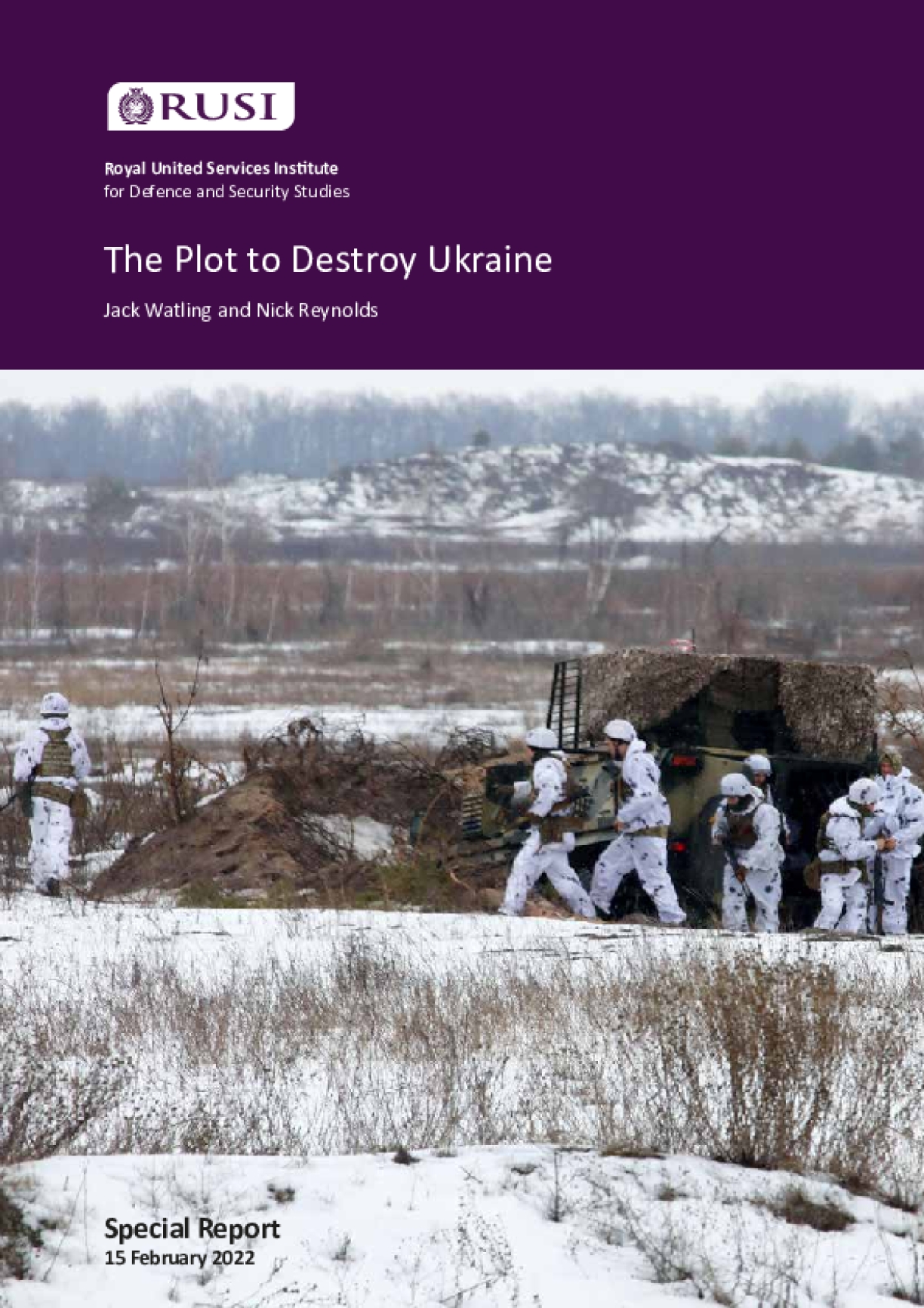 The Plot to Destroy Ukraine

This Special Report seeks to outline what Russia is trying to achieve in Ukraine, and how it is operationalising that intent through the synchronised application of state power.The spectre of war looms over Europe. As Russian troops mass around Ukraine's borders there is a palpable sense of crisis. In Ukraine, however, there is a combination of resignation and grim determination to survive. If Russia invades Ukrainians will fight. But the real threat to their country is viewed as multifaceted and enduring. Ukrainians must not only deter military aggression, but survive the political, social, and economic war that Russia is waging against their country.