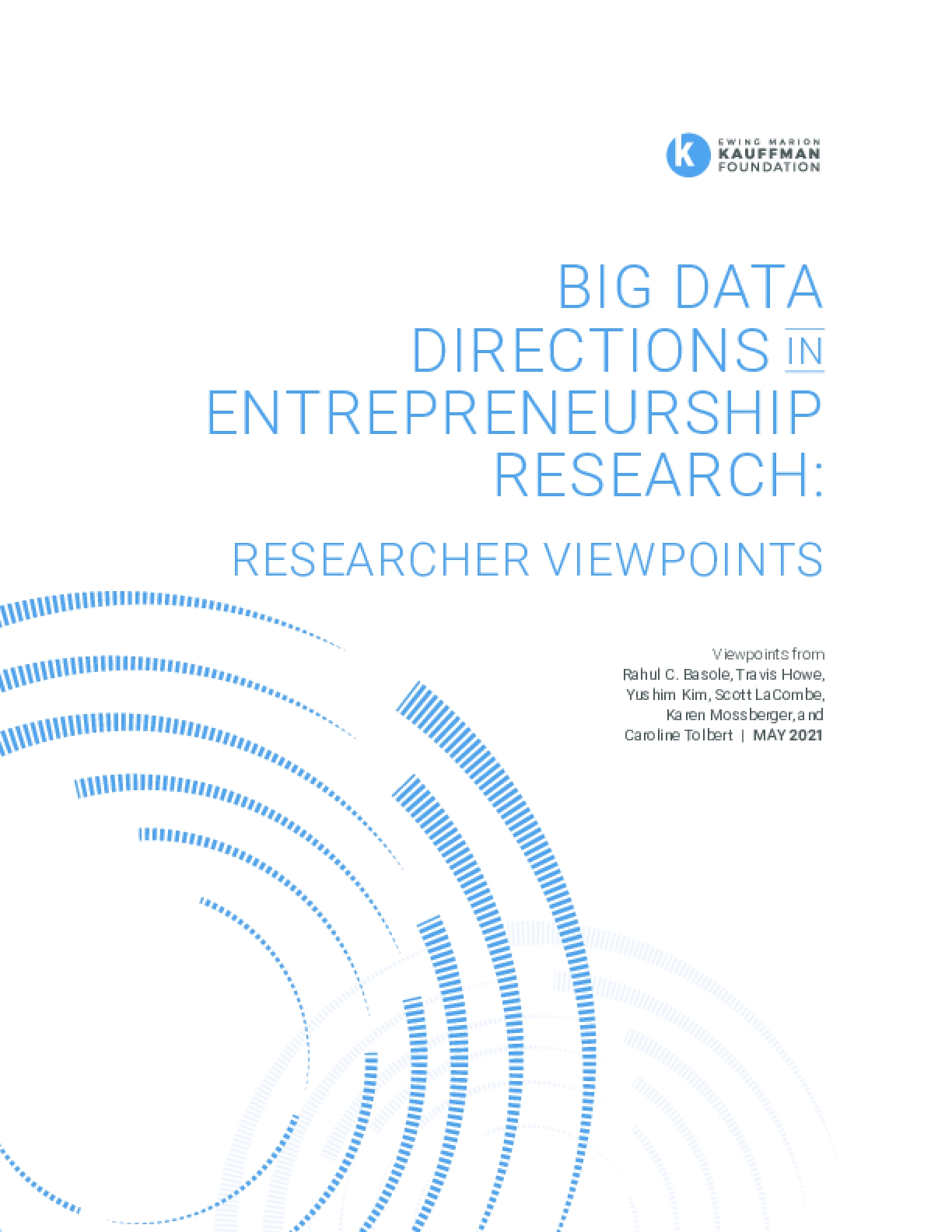 Our world is becoming increasing Funesian in that we are perceiving and storing more and more information in the form of data. But, as with Funes, access to information is not the same as understanding. Are we also better at extracting meaning from all of this data? What does understanding rely on – is it only possible through sophisticated data-processing techniques or is something else required? This paper will briefly discuss three common pitfalls related to the challenge of extracting meaning from data. 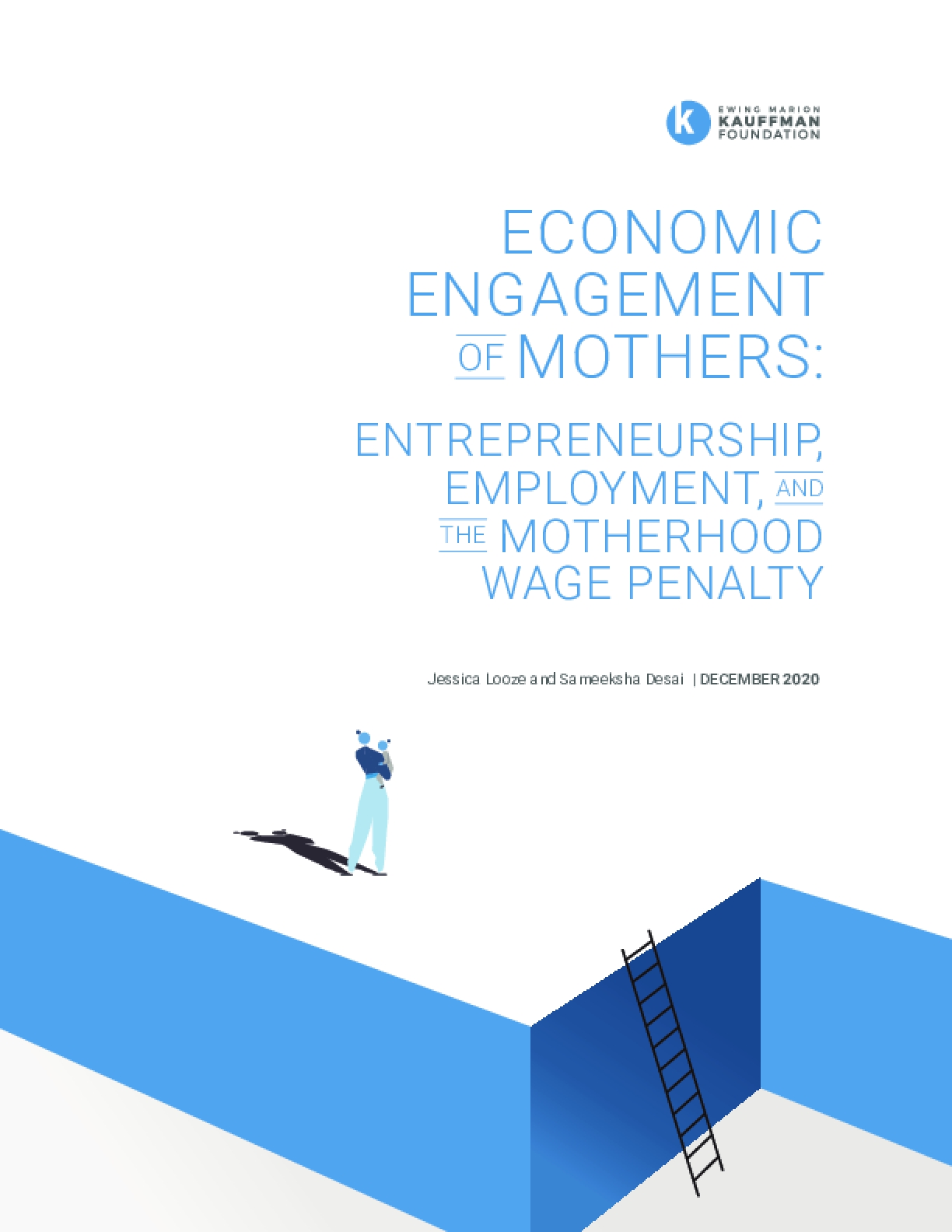 The economic value women bring to their own households and to the broader economy is well-documented. In fact, nearly all of the economic gains that have occurred among middle class families since 1970 have come from the increased earnings of women. Mothers make substantial contributions to the finances of many families and households. In 2018, nearly half of the more than 30 million families with children under 18 in the United States had either a single mother or a married mother contributing at least 40% of a couple's joint earnings.Despite the importance of mothers' economic contributions, the broader economy fails to support mothers in a variety of ways. The costs of raising children fall largely on families – and disproportionately on mothers. In addition to the lack of support for combining careers with caregiving, mothers face a motherhood wage penalty, which accounts for much of the gender wage gap. Even entrepreneurship, an economic activity that can potentially offer more autonomy and flexibility, is made more difficult for mothers by child care challenges and barriers to entrepreneurship for women more broadly.Why is motherhood undervalued and unsupported economically?What does entrepreneurship support mean for entrepreneurs who are mothers? And how can we support mothers' access to opportunities to engage in the economy – and ease their access to opportunity through entrepreneurship? 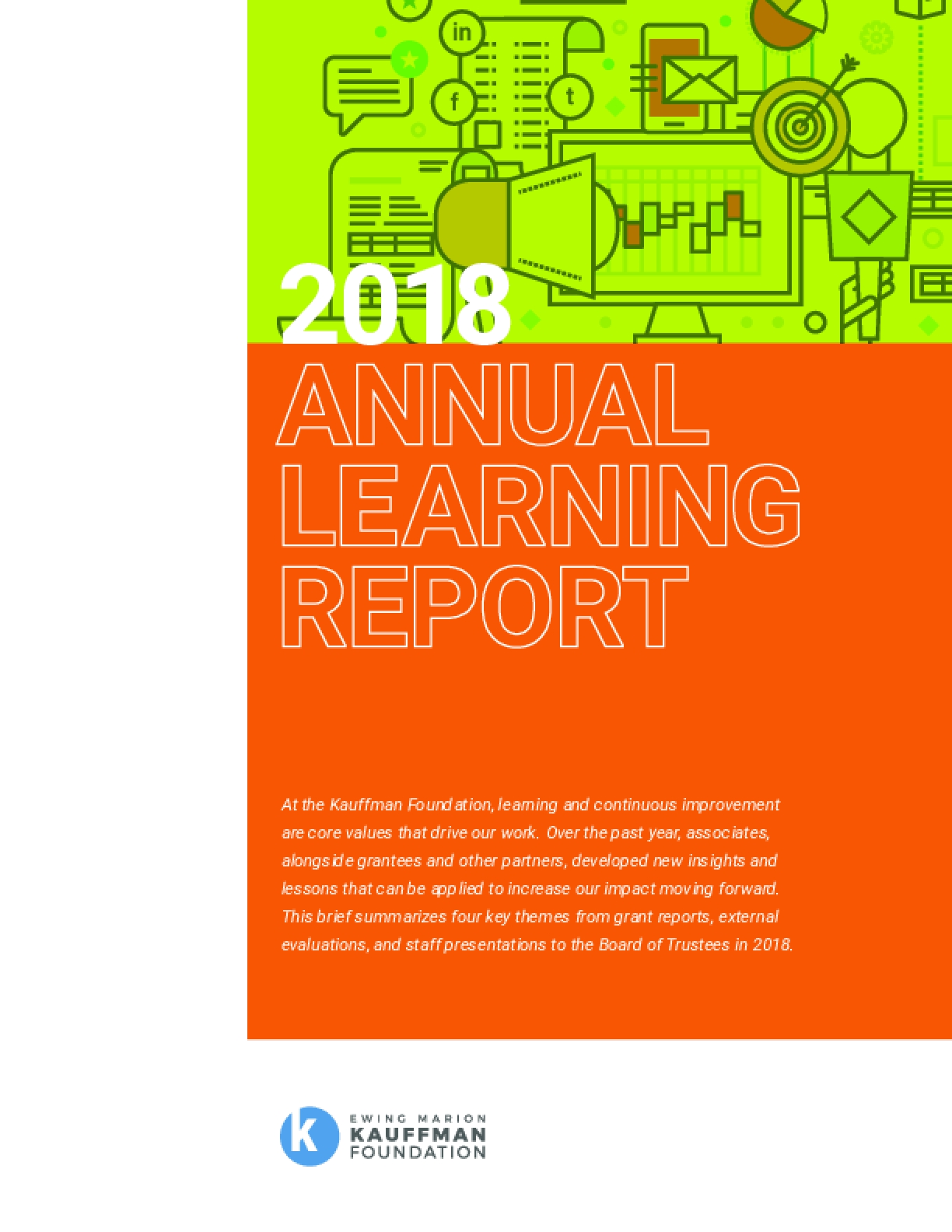 At the Kauffman Foundation, learning and continuous improvement are core values that drive our work. Over the past year, associates, alongside grantees and other partners, developed new insights and lessons that can be applied to increase our impact moving forward. The Annual Learning Report summarizes four key themes from grant reports, external evaluations, and staff presentations to the Board of Trustees in 2018. 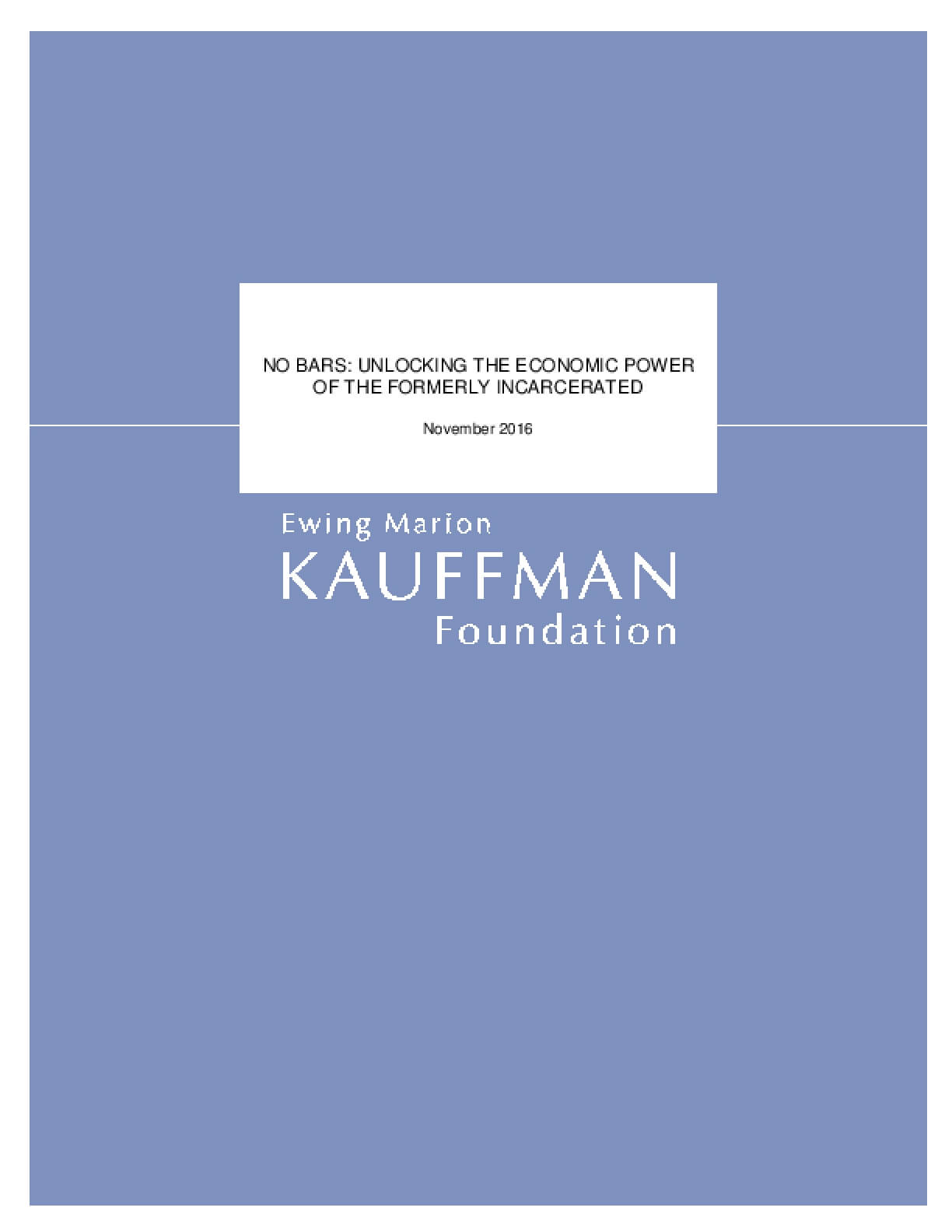 No Bars: Unlocking the Economic Power of the Fomerly Incarcerated

For the 30 percent of U.S. adults with criminal records, attaining economic success after leaving prison relies on the ability to find good jobs, says a new paper released today by the Ewing Marion Kauffman Foundation. Even those with minor offenses and those who have been arrested but not charged can encounter numerous barriers in their search for employment. Significant among the obstacles are occupational licensing requirements that bar those with criminal records from professions that otherwise might provide economic independence and positively impact the American economy.The study, "No Bars: Unlocking the Economic Power of the Formerly Incarcerated," summarizes recent research on employment of formerly incarcerated individuals, focusing on the disproportionate effect of occupational licensing requirements.Between 60 percent and 75 percent of the more than 600,000 Americans released from federal and state prisons each year are still unemployed one year after release. Those who have found jobs make less money than do individuals without criminal records."Hundreds of professions that require occupational licenses could provide paths to economic independence for those formerly incarcerated, except for the fact that their criminal histories alone may ban them from receiving licenses, even if their convictions had no relevancy to the job," said Emily Fetsch, research assistant at the Kauffman Foundation and author of the paper. "Removing these barriers would benefit the formerly incarcerated and their families, curb recidivism and boost the economy overall."High rates of incarceration affect people of color disproportionately. Compared to white men, black men are six times more likely to be incarcerated, and Hispanic men are 2.5 times more likely to be incarcerated."Licensing restrictions can block an important avenue to self-sufficiency," says Jason Wiens, policy director at the Kauffman Foundation. "Numerous options for reform exist."The effect of occupational licensing is a closing off of numerous low-skill (e.g., nail technician or barber) and high-skill (e.g., architect or geologist) jobs that could give formerly incarcerated individuals a means for supporting themselves and their families.The "No Bars" paper recommends these policy changes to remove unnecessary occupational licensing barriers to employment:Exclude people with criminal records from jobs that require occupational licenses only when their convictions are recent, relevant to the occupation and pose a public safety threat.Offer former inmates the opportunity to secure certificates of restoration or rehabilitation that would open the door to receiving occupational licenses.Prevent individuals who have been arrested for, but never convicted of, crimes from being disqualified from occupational licensing based solely on the arrest.Question the need for occupational licensing policy altogether, rather than simply considering its restructuring. When public health is not threatened, licensing could be replaced by certification or another lesser form of regulation. 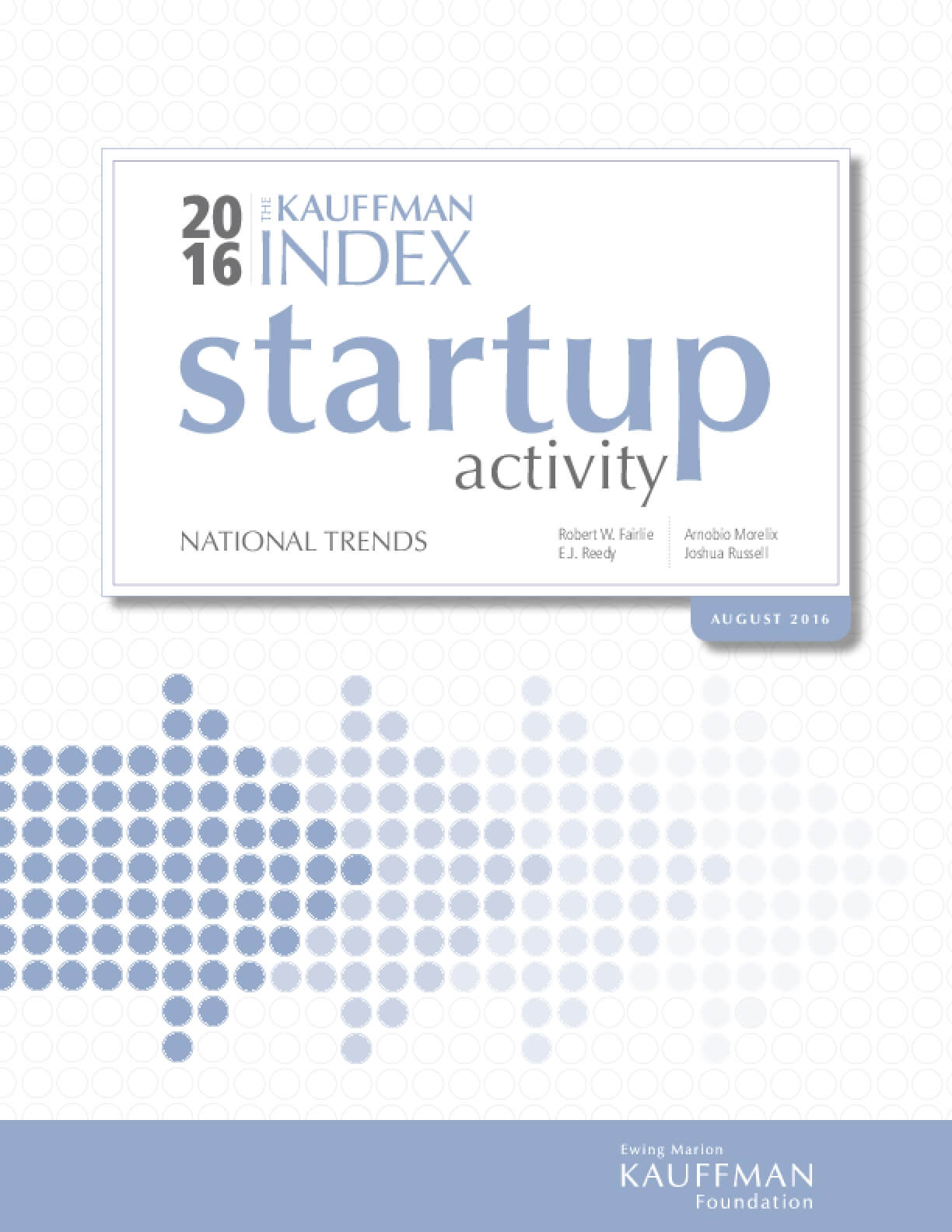 This report provides a broad index measure of business startup activity in the United States. It is an equally weighted index of three normalized measures of startup activity:The Rate of New Entrepreneurs in the economy, calculated as the percentage of adults becoming entrepreneurs in a given month.The Opportunity Share of New Entrepreneurs, calculated as the percentage of new entrepreneurs driven primarily by "opportunity" vs. "necessity."The Startup Density of a region, measured as the number of new employer businesses normalized by total business population. 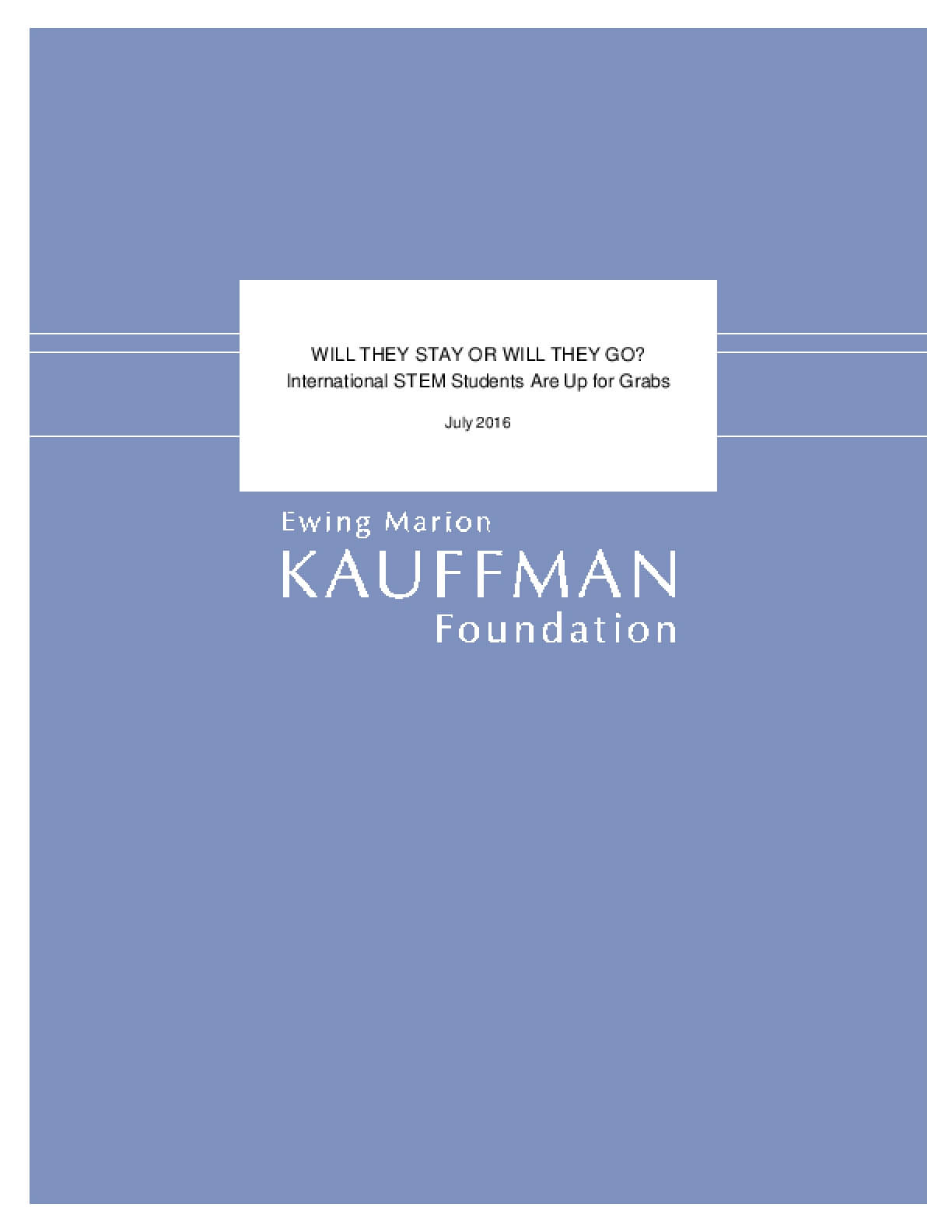 Will They Stay or Will They Go? International STEM Students Are Up for Grabs

The proportion of international PhD-level students on temporary visas to study STEM subjects in the United States has doubled over the past thirty years. Further, these students are much more likely than domestic students to major in and graduate with STEM-related doctoral degrees and to pursue careers in high-tech firms. The United States stands to lose its significant investment in these highly qualified students—and their potential contributions to U.S. entrepreneurship and innovation—if they return to their home countries after completing their degrees or post-doctoral work. We explore why foreign doctoral students choose to study in the United States and what compels them to either remain in the country or return home after earning their PhDs. We also compare their future plans with those of domestic PhD students. 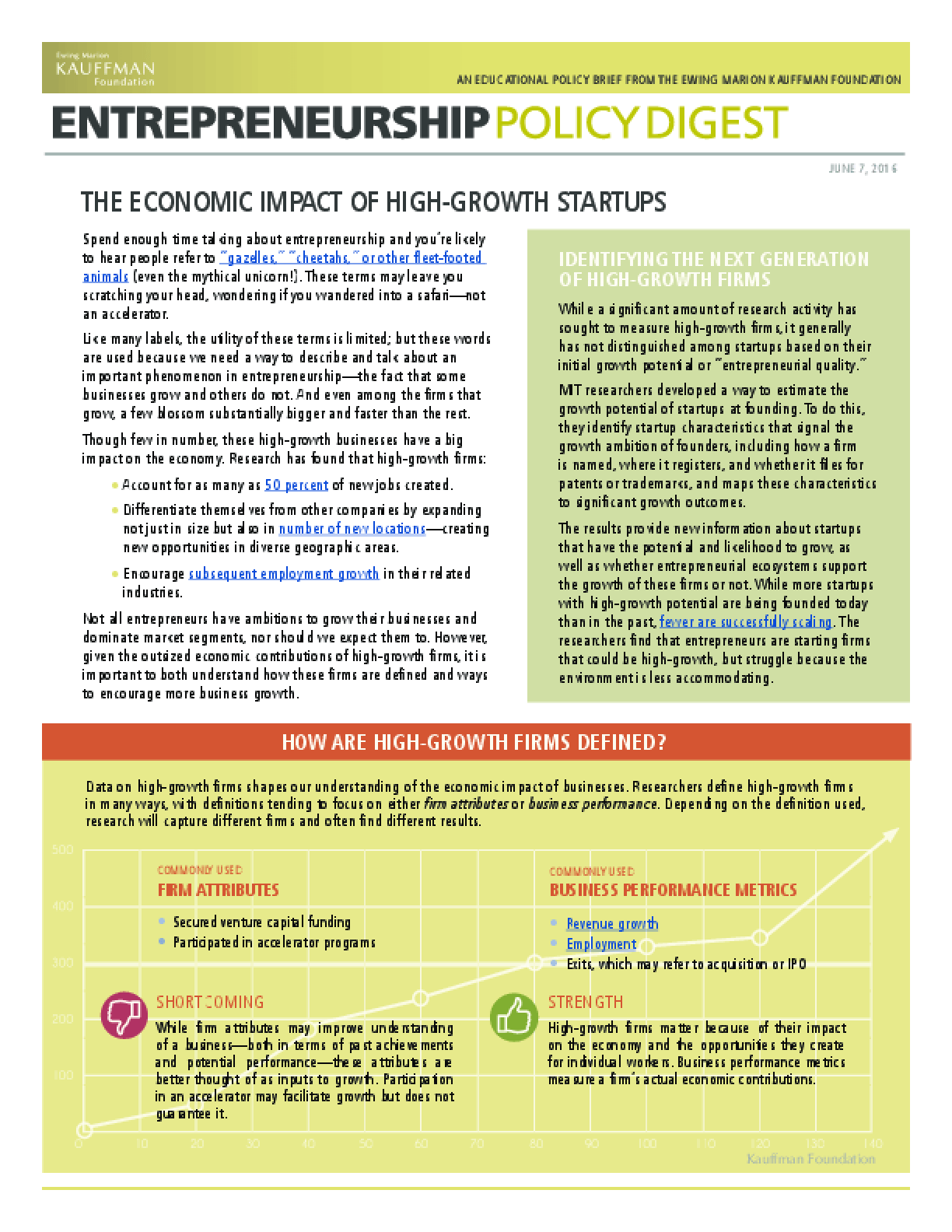 The Economic Impact of High-Growth Startups

With labels like "gazelles," "cheetahs" and "unicorns," high-growth firms are a rare phenomenon in entrepreneurship that have a big impact on the economy. According to a new Entrepreneurship Policy Digest released today by the Ewing Marion Kauffman Foundation, given their outsized contributions to the economy, it is important to understand high-growth firms and how their impacts are measured.The Digest highlights findings from the Kauffman Index of Growth Entrepreneurship, including the top 40 metro area high-growth business rankings, and these national trends:    Growth entrepreneurship is increasing, though not at historic highs    High-growth average employment growth rose    High-tech is not a pre-requisite for high-growth; other sectors are growing too    The number of high-growth firms varies within industries from year to yearHigh-growth firms expand to numerous locations and encourage employment growth, accounting for as much as 50 percent of new jobs created. The Policy Digest explains how defining high-growth businesses using firm attributes – venture capital funding and participation in accelerators – will capture different results than defining them by business performance metrics – revenue growth, employment and exits.The Digest recommends these strategies to encourage an environment for growth entrepreneurship:    Increase college completion rates    Welcome and retain immigrant entrepreneurs    Limit non-compete agreements 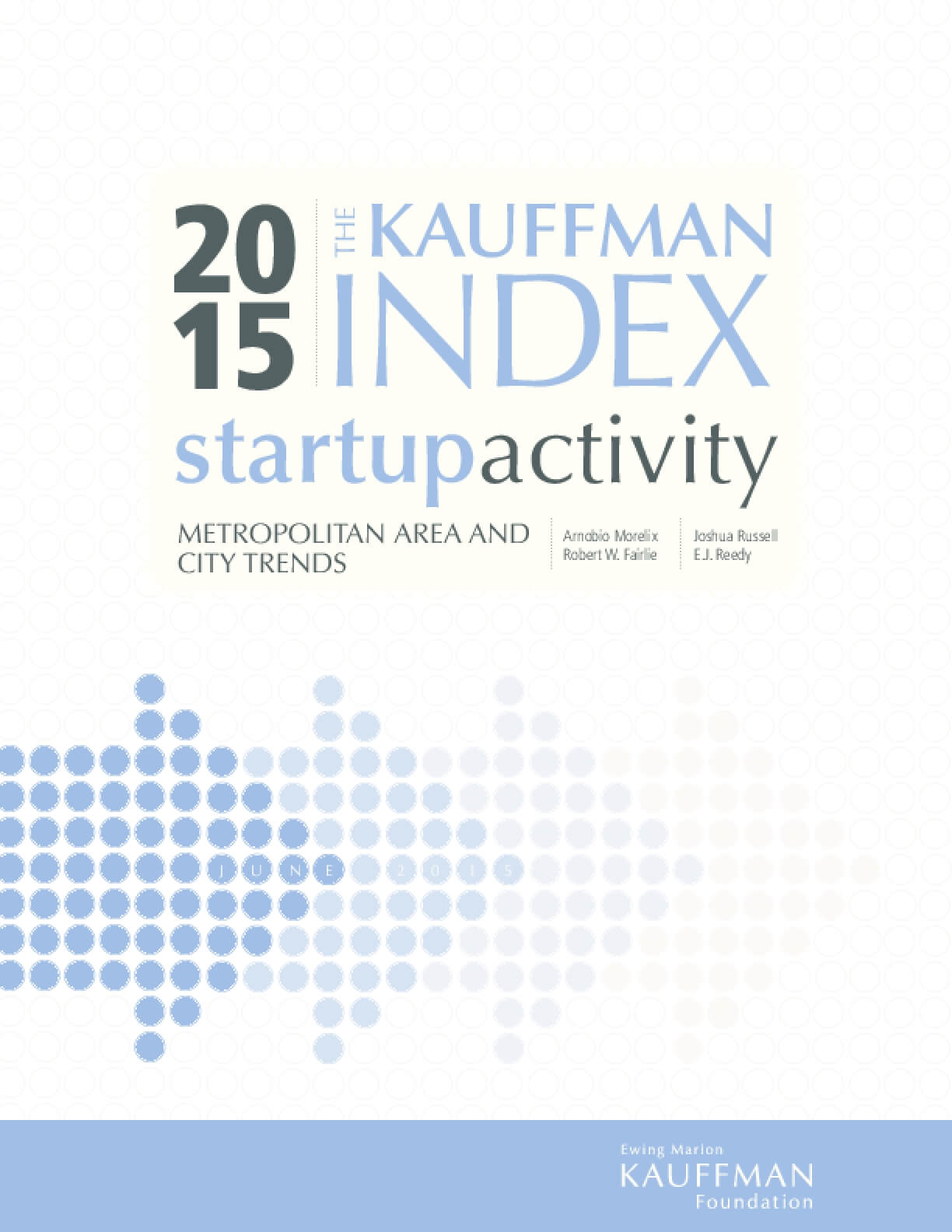 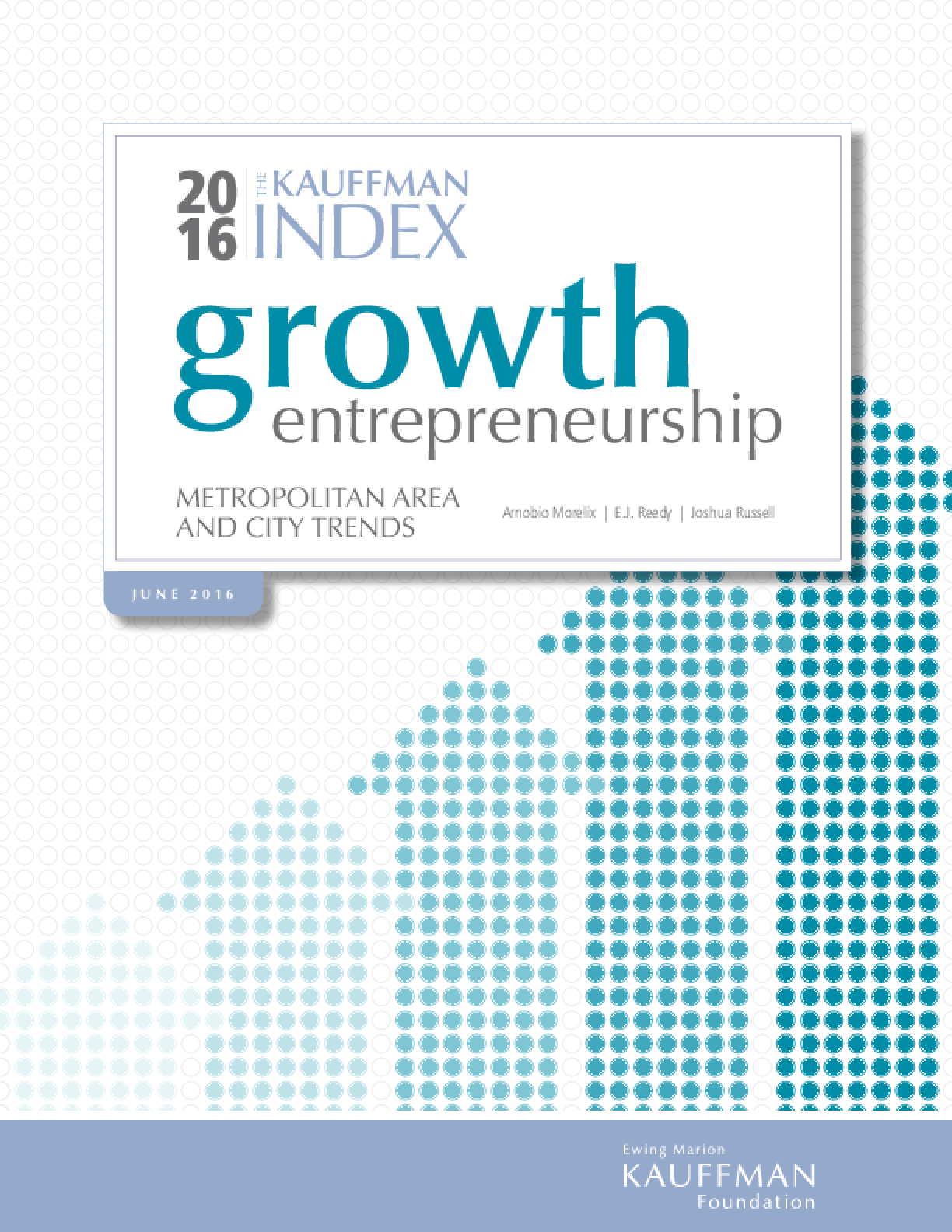 The reports present trends in Growth Entrepreneurship in each state and the 40 largest metro areas relying on three composite indicators to look at business revenue and job growth: Rate of Startup Growth, Share of Scaleups and High-Growth Company Density.Growth entrepreneurship data for the 40 largest U.S. metropolitan areas was benchmarked against the national average. Cities with the most growth entrepreneurship activity spread widely around the United States, with entrepreneurship growing in certain pockets of virtually every region: the Midwest, the South and the East and West Coasts.Most of the metros considered "usual suspects" for growth, including Austin, Boston, San Diego, San Francisco and San Jose, performed very well. But top performers also included Washington, D.C.; Nashville, Tennessee; Columbus, Ohio; and other metros not typically noted for entrepreneurship.The top five ranked metros were Washington, D.C.; Austin, Texas; San Jose, California; Columbus, Ohio; and Nashville, Tennessee. 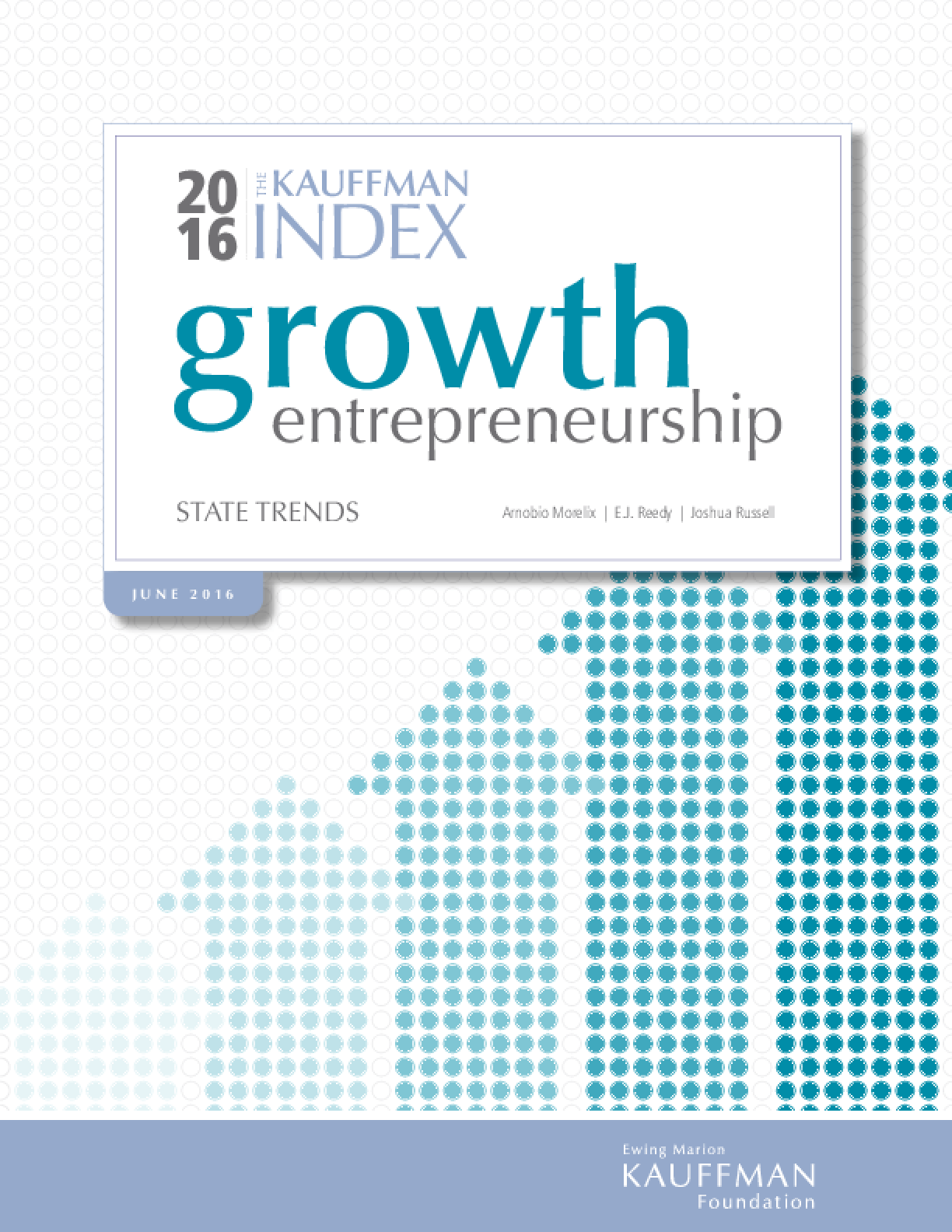 The reports present trends in Growth Entrepreneurship in each state and the 40 largest metro areas relying on three composite indicators to look at business revenue and job growth: Rate of Startup Growth, Share of Scaleups and High-Growth Company Density.To facilitate comparison across peer groups of states, the Kauffman Index looked at the 25 largest and 25 smallest states by population. The larger states are overwhelmingly urban, while populations in smaller states tend to be more dispersed.Virginia took first place in growth entrepreneurship activity among the 25 largest states, followed by Maryland, Arizona, Massachusetts and Texas. Kauffman researchers said it is no coincidence that two of the top states include the highly entrepreneurial Washington, D.C., metro area. Among larger states, 12 ranked higher than they did last year, four experienced no change in rankings and nine ranked lower. 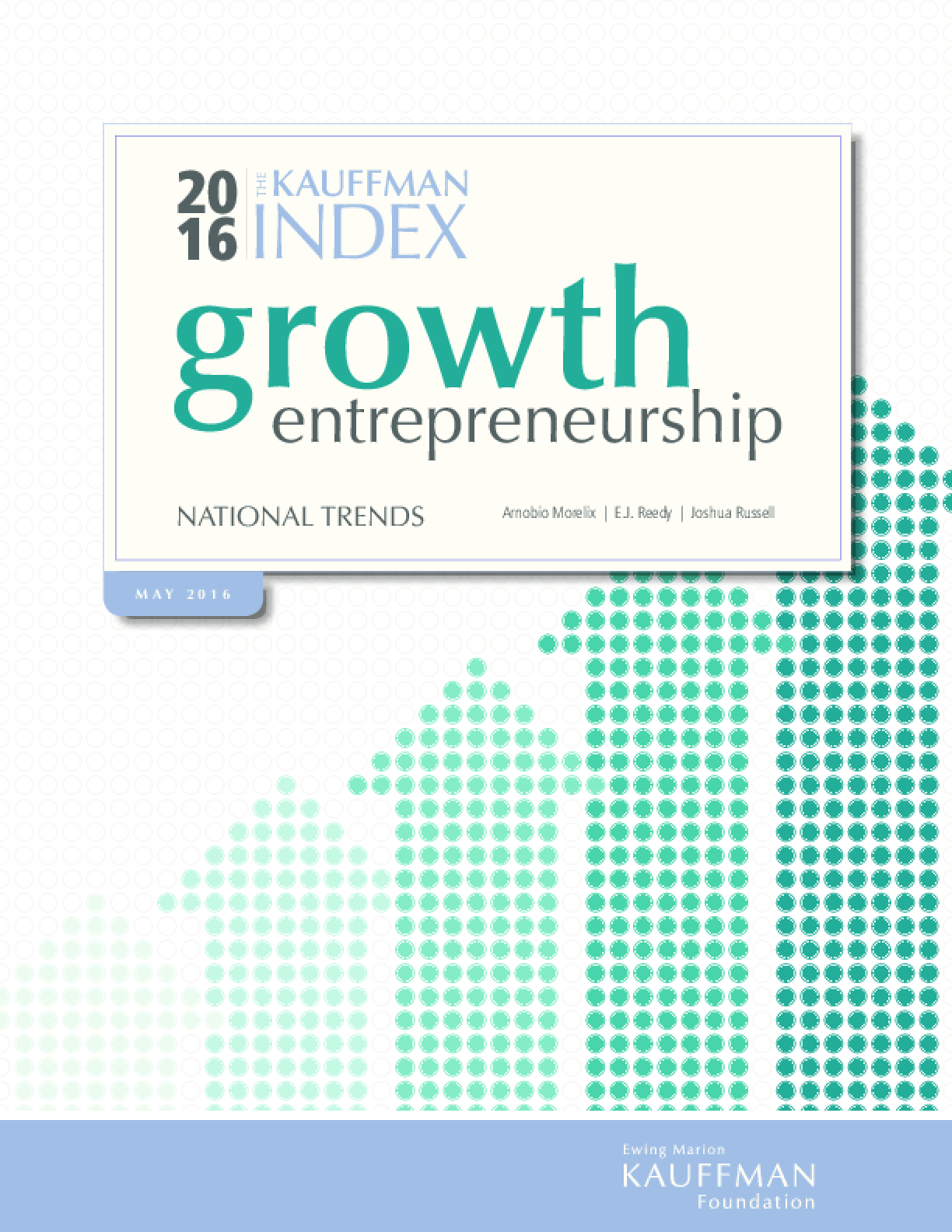 The Kauffman Index of Growth Entrepreneurship is an early indicator of business growth in the United States, integrating several high-quality sources of timely information into one composite indicator of entrepreneurial business growth. The Index captures growth entrepreneurship in all industries, and is based on the universe of all U.S. employer businesses (approximately 5 million firms) and a privately collected benchmark of growth businesses. This allows us to measure business growth from both revenue and job creation perspectives. Moreover, we also present trends on business exits—more particularly initial public offerings, a business milestone commonly associated with innovative, high-growth companies.This new report shows that U.S. entrepreneurial businesses are growing, and rose in the last year for the third year in a row. This year's increase was driven by startups growing faster in their first five years than they were in previous years, and more young companies scaling up employment. The entrepreneurial activity increase in the 2016 Index represents the largest year-over-year increase in the past decade. Despite these promising markers, however, many U.S. growth indicators remain in a long-term decline.

The Looming Entrepreneurial Boom: How Policymakers Can Renew Startup Growth

Entrepreneurship drives economic growth, propels job creation, and creates opportunities for upward economic mobility. Yet, fewer Americans are starting businesses today than in the past, and overall, the economy has been growing slower than in the post-recession periods of decades prior.Seeing these trends in 2014, the Kauffman Foundation announced a two-year initiative to develop new ideas for how to spur broad-based economic growth and opportunity through entrepreneurship. The result is the New Entrepreneurial Growth Agenda, a collection of essays written by the nation's leading researchers and policy experts offering recommendations for how national, state, and local governments can foster entrepreneurship. These essays are rich in content and cover myriad issues that affect entrepreneurship and vice versa, from technology creation and destruction, to inequality, talent, and education improvements, to a focus on cities, overall policies, and politics.We commend them to you and look forward to robust debate and, ultimately, the implementation of policy that helps entrepreneurs and spurs growth.