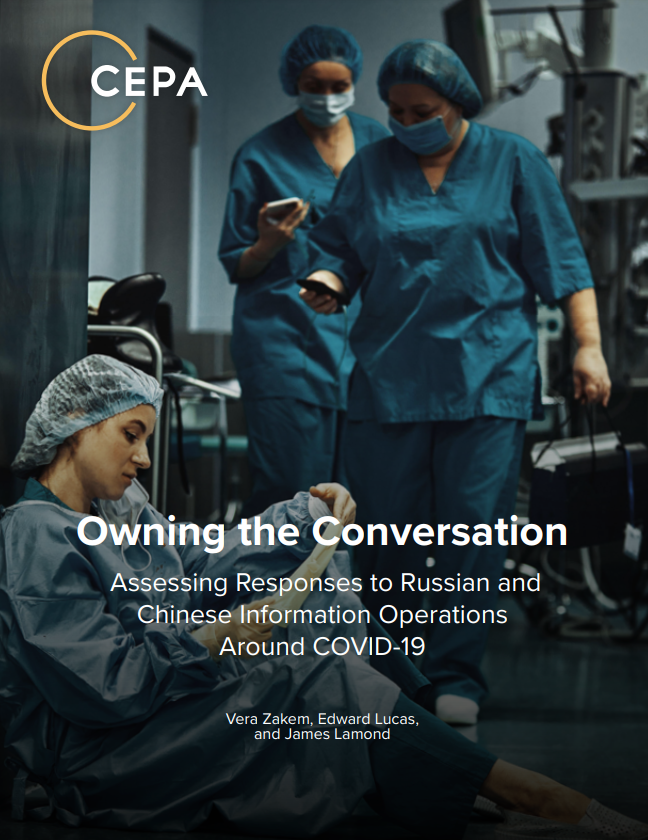 Owning the Conversation: Assessing Responses to Russian and Chinese Information Operations Around COVID-19

The crisis around COVID-19 and the resulting "infodemic" has been exploited by authoritarian regimes to spread propaganda and disinformation among populations around the world. The Russian Federation and the Chinese Communist Party (CCP) have used the pandemic to engage in information warfare, spread divisive content, advance conspiracy theories, and promote public health propaganda that undermines US and European efforts to fight the pandemic.In 2021, the Center for European Policy Analysis (CEPA) published two reports, Information Bedlam: Russian and Chinese Information Operations During COVID-19 and Jabbed in the Back: Mapping Russian and Chinese Information Operations During COVID-19, comparing how the Kremlin and CCP have deployed information operations around the COVID-19 pandemic, virus origins, and efficacy of the vaccines to influence targeted populations globally, using the infodemic as a diplomatic and geopolitical weapon. The CCP mainly spread COVID-19 narratives to shape perceptions about the origins of the coronavirus and often push narratives to shun responsibility. Meanwhile, the Kremlin recycled existing narratives, pushing and amplifying them via validators and unsuspecting people in order to sow internal divisions and further exploit polarized views in the West about the efficacy of vaccines, treatments, origins of new variants, and impact to the population. While the world has learned about new COVID-19 variants, such as Omicron, China and Russia have evolved their tactics to spread COVID-19 disinformation and propaganda and further sow doubt and confuse the population about the pandemic.As Russia and China's tactics evolve, this policy brief examines whether Western institutions, including governments, digital platforms, and nongovernmental organizations, have been able to counter information warfare around this unprecedented crisis. This paper examines a broad range of initiatives and responses to counter COVID-19 disinformation coming from Russia and China, and to strengthen societal resilience more broadly. Because addressing this challenge requires a whole-of-society approach, this report highlights government, technology, and civil society interventions, both in Europe and in the US, identifying what works and where there are existing gaps.Of note, the interventions and related assessments presented here are based on currently available data. It is important to highlight that governments regularly pass new regulations and measures, and digital platforms continue to evolve their policy, product, and enforcement actions in response to COVID-19 disinformation. 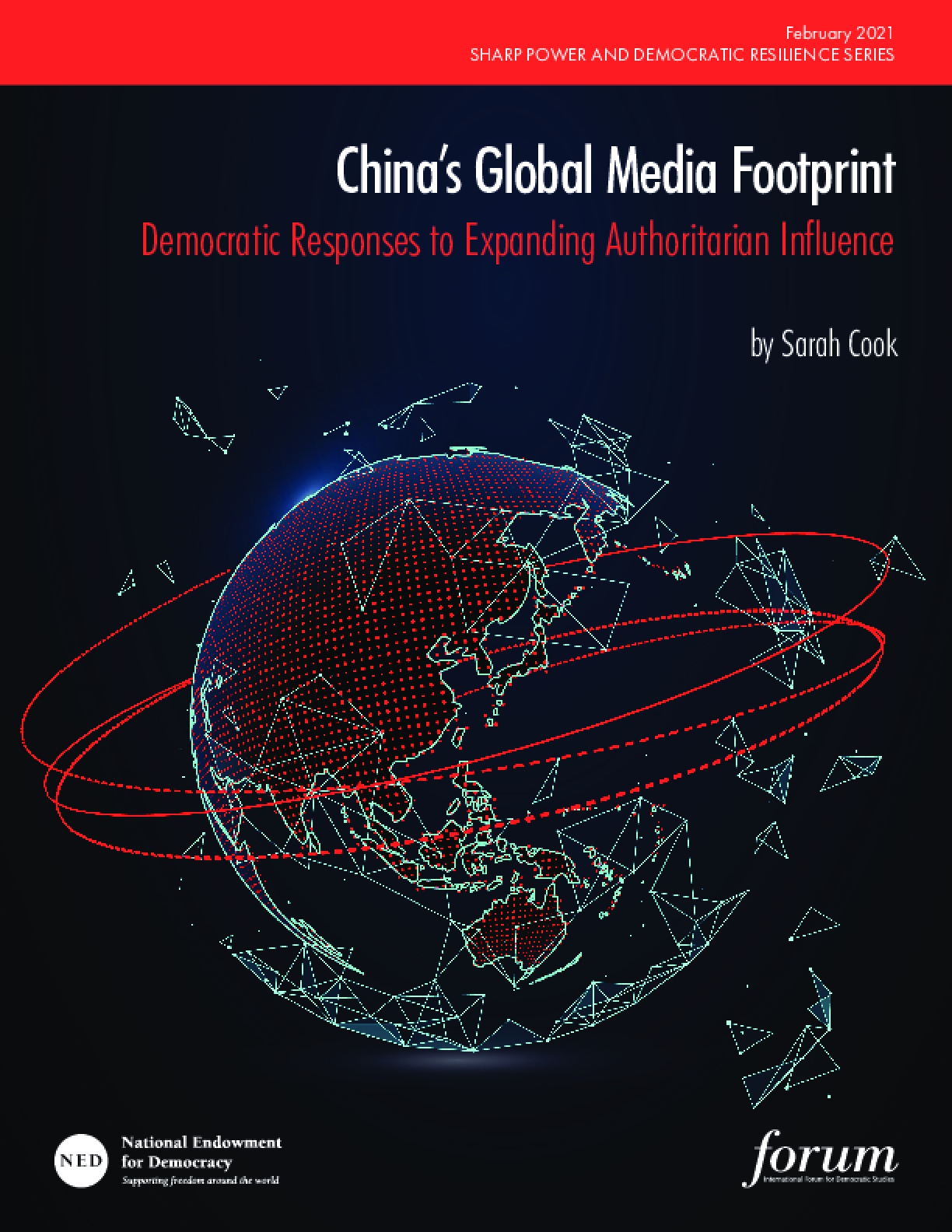 This report describes the Chinese Communist Party's (CCP) sharp power efforts to shape media content around the world. It also documents how nongovernmental actors contribute to a growing accumulation of activities aimed at countering Beijing's media influence while protecting democratic institutions.Leveraging propaganda, disinformation, censorship, and influence over key nodes in the information flow, Beijing's expanding efforts to shape global narratives go beyond simply "telling China's story." Their sharper edge undermines democratic norms, erodes national sovereignty, weakens the financial sustainability of independent media, and violates local laws. An acknowledgment and understanding of the challenges that China's party-state and related actors pose to media freedom globally—not only by China experts, but by the full array of nongovernmental actors engaged in the media, news, and technology sectors—must be central to a comprehensive response. 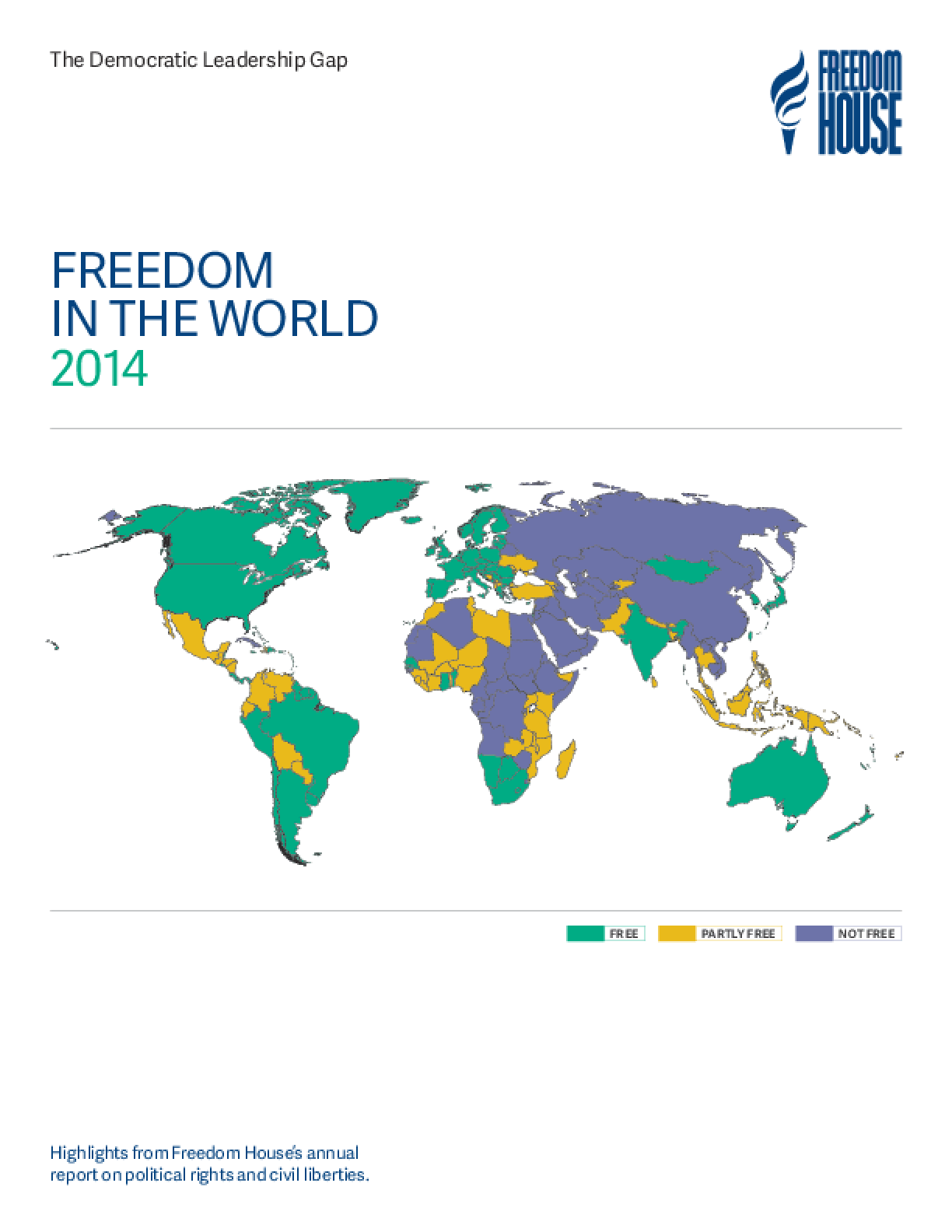 The state of freedom declined for the eighth consecutive year in 2013, according to Freedom in the World 2014, Freedom House's annual country-by-country report on global political rights and civil liberties.Particularly notable were developments in Egypt, which endured across-the-board reversals in its democratic institutions following a military coup. There were also serious setbacks to democratic rights in other large, politically influential countries, including Russia, Ukraine, Azerbaijan, Turkey, Venezuela, and Indonesia.Findings of the 41st edition of Freedom in the World, the oldest, most authoritative report of democracy and human rights, include: Fifty-four countries showed overall declines in political rights and civil liberties, compared with 40 that showed gains.For the eighth consecutive year, Freedom in the World recorded more declines in democracy worldwide than gains.Some leaders effectively relied on "modern authoritarianism," crippling their political opposition without annihilating it, and flouting the rule of law while maintaining a veneer of order, legitimacy, and prosperity.Central to modern authoritarians is the capture of institutions that undergird political pluralism. They seek to dominate not only the executive and legislative branches, but also the media, judiciary, civil society, economy, and security forces.There were some positive signs for the year: Civil liberties improved in Tunisia, the most promising of the Arab Spring countries.Pakistan showed gains due to successful elections and an orderly rotation of power.In Africa, gains occurred in Mali, Côte d'Ivoire, Senegal, Madagascar, Rwanda, Togo, and Zimbabwe.The addition of Honduras, Kenya, Nepal, and Pakistan raised the number of electoral democracies to 122. 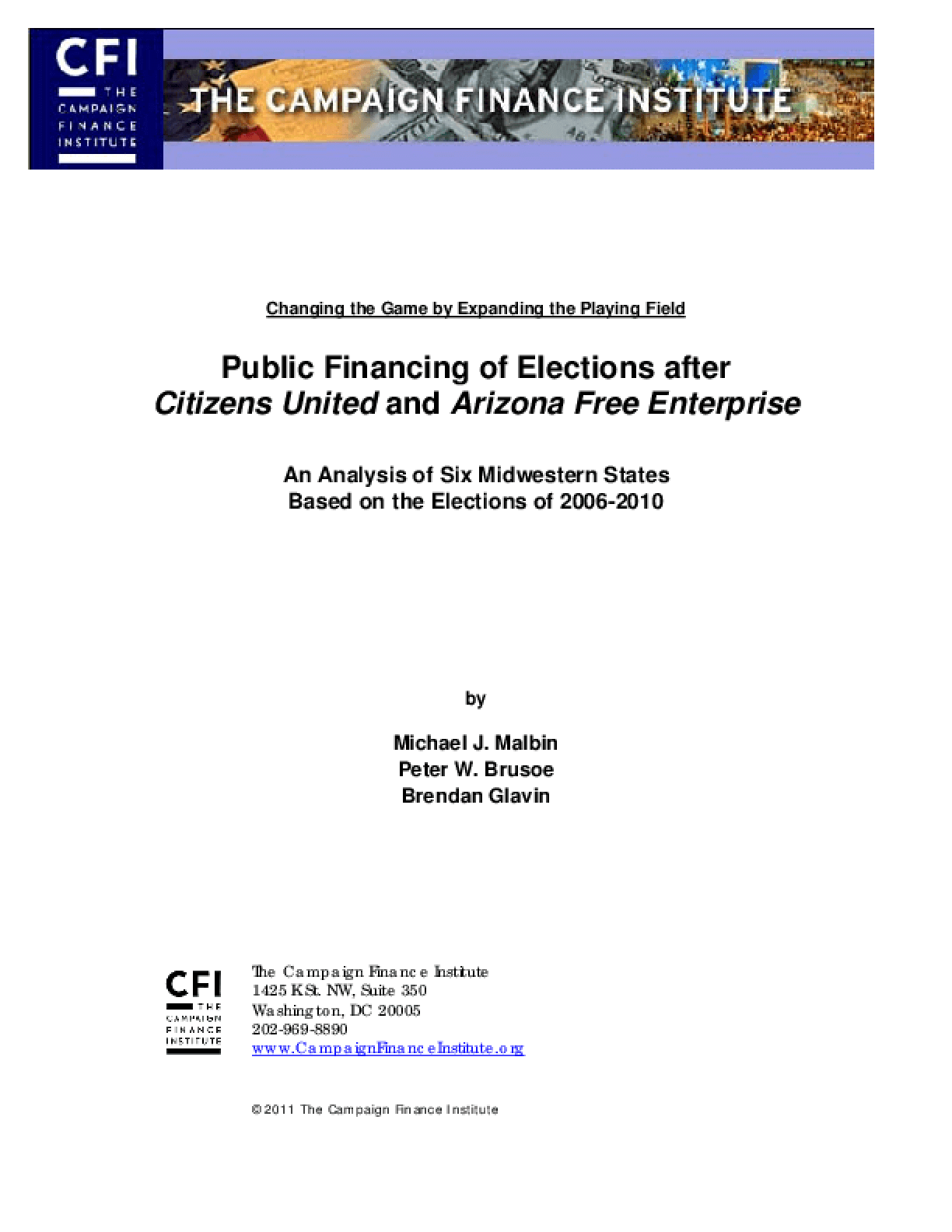 Based on political contribution records from six Midwestern states, compares the projected impact of providing small-donor public matching funds to that of lowering contribution limits on election participation by a diverse mix of donors. 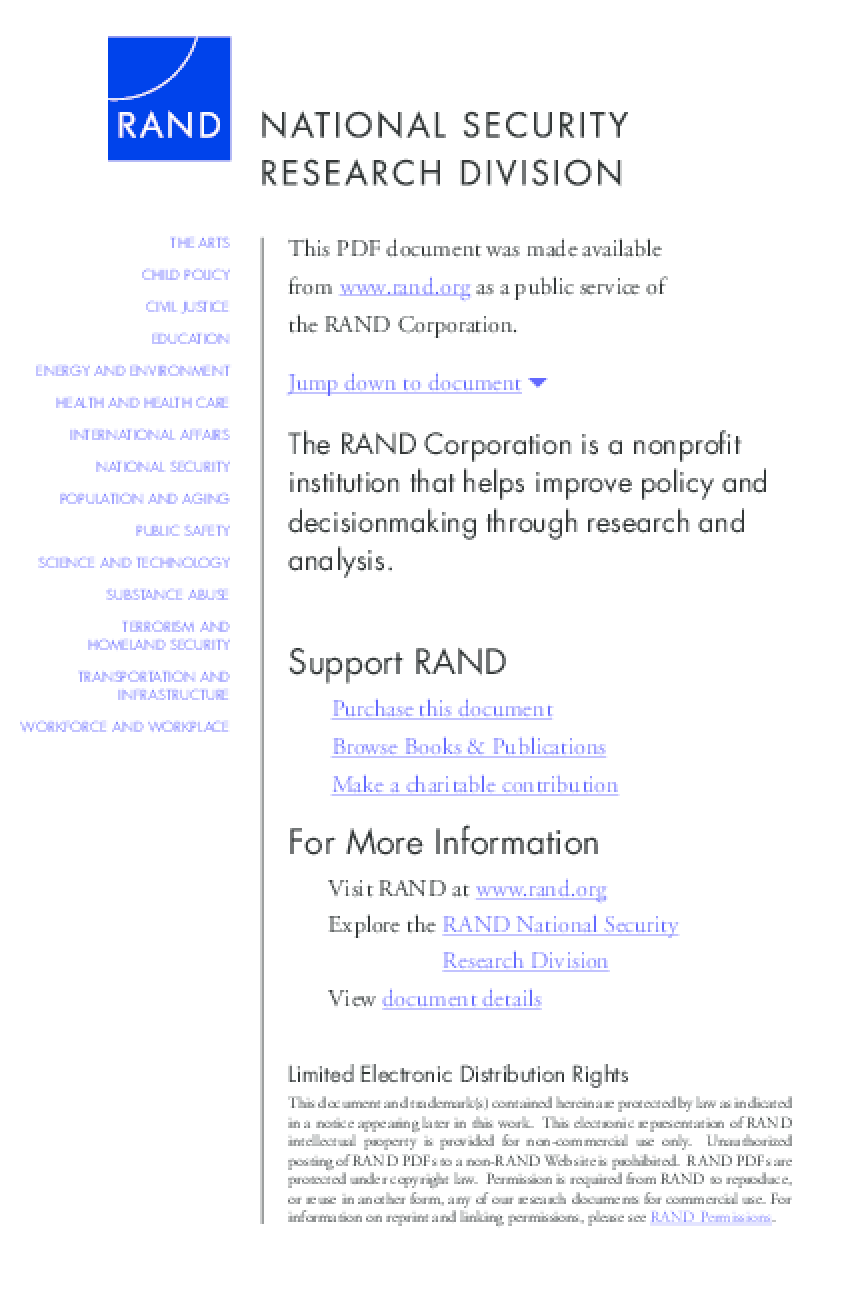 Analyzes the processes through which Islamist extremists become deradicalized; assesses the effectiveness of deradicalization programs in the Middle East, Southeast Asia, and Europe; and outlines best practices, implications, and policy recommendations. 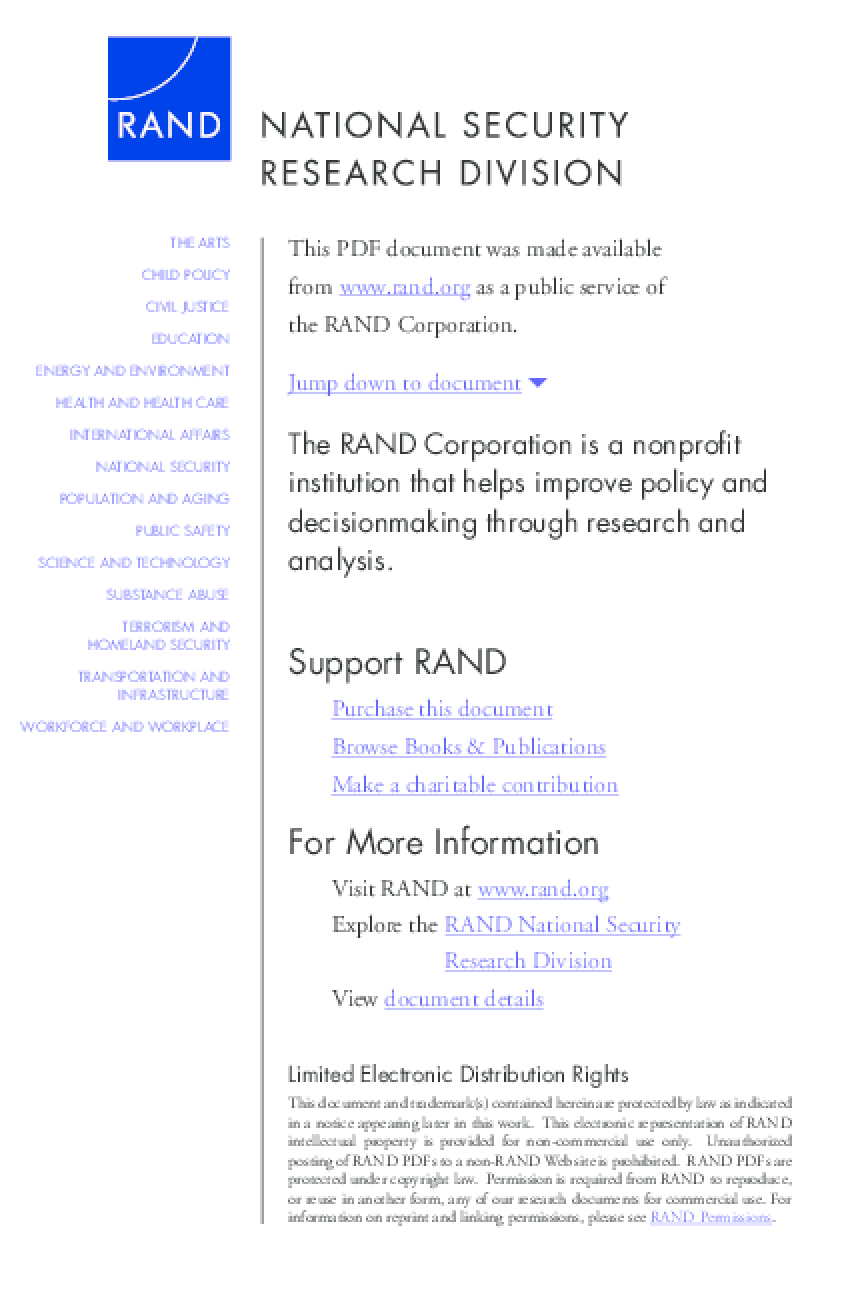 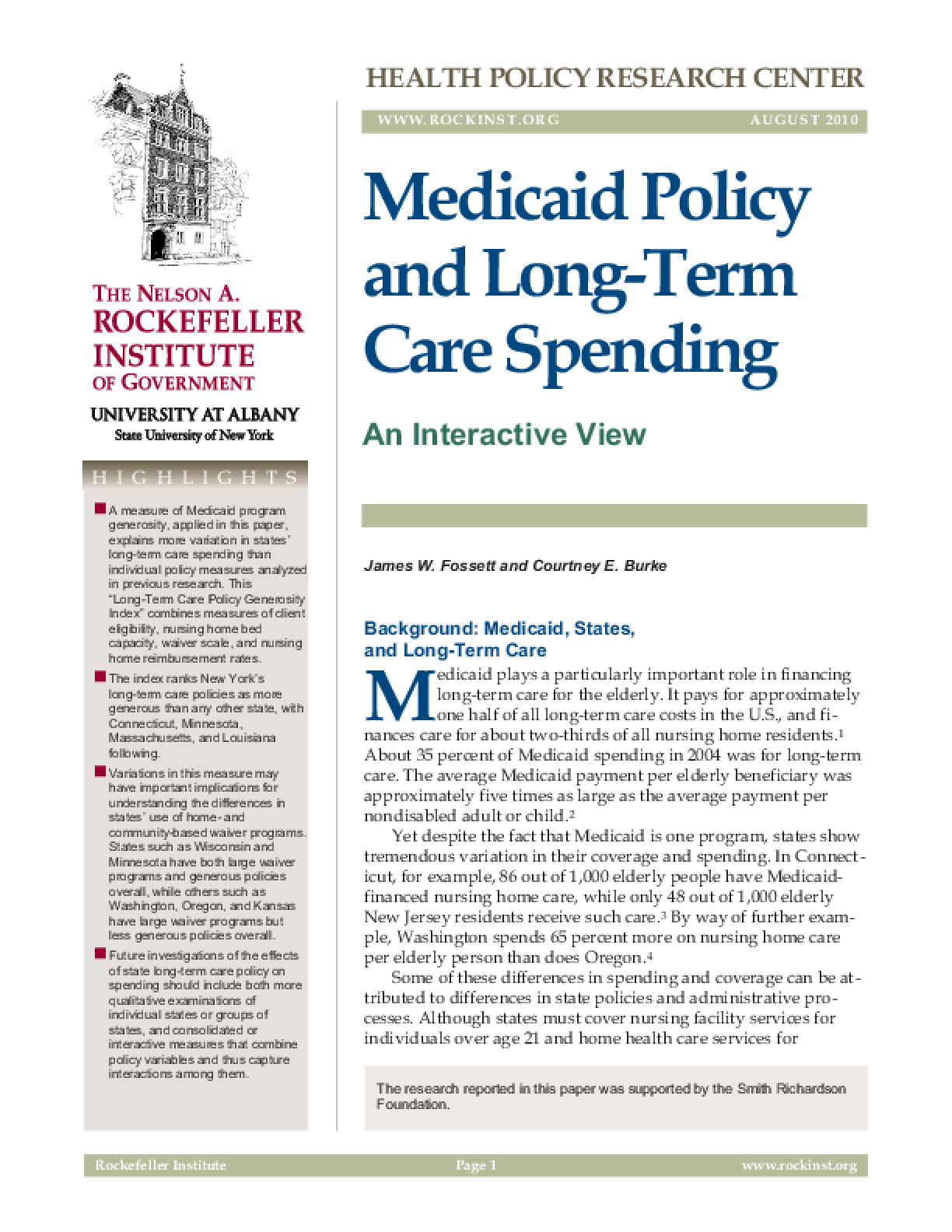 Examines state variations in Medicaid spending on long-term care and links between coverage policies and spending. Outlines potential factors, limitations of conventional methods of measurement, and an approach that includes interactions between policies. 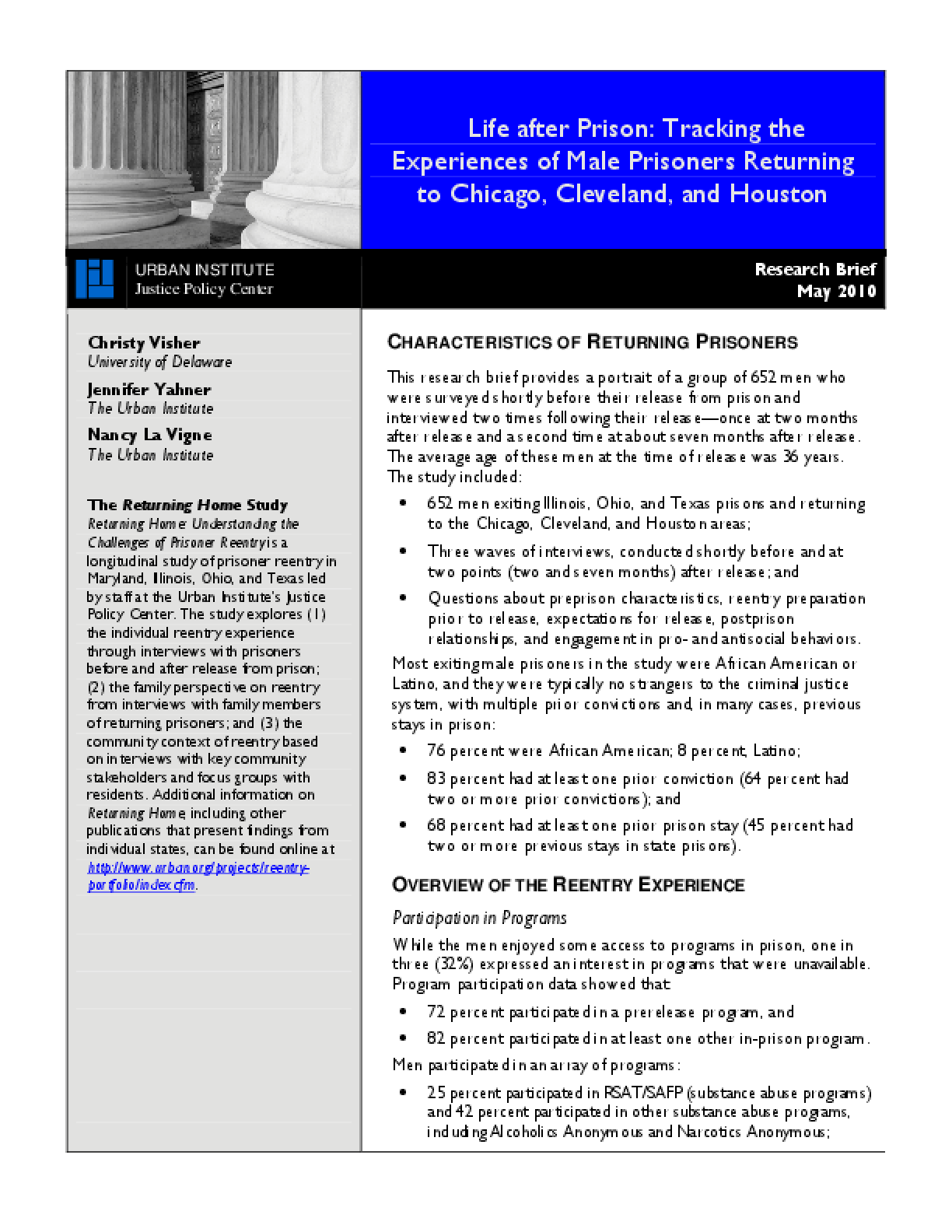 Life After Prison: Tracking the Experiences of Male Prisoners Returning to Chicago, Cleveland, and Houston

Examines the reentry experiences of 652 men in the three cities, including housing stability, family relationships, substance use, employment, and recidivism. Analyzes outcome predictors such as prison programs, job training, and family structure. 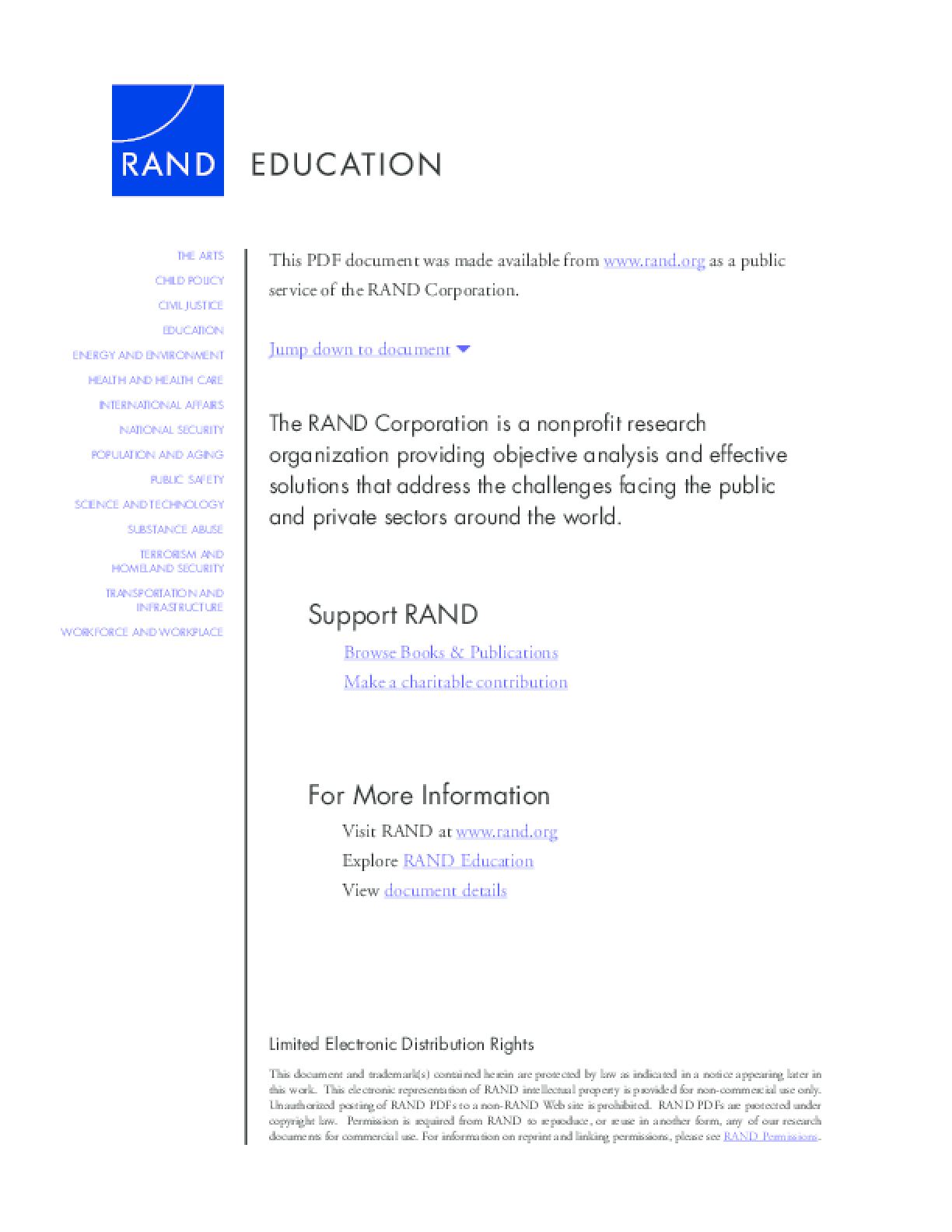 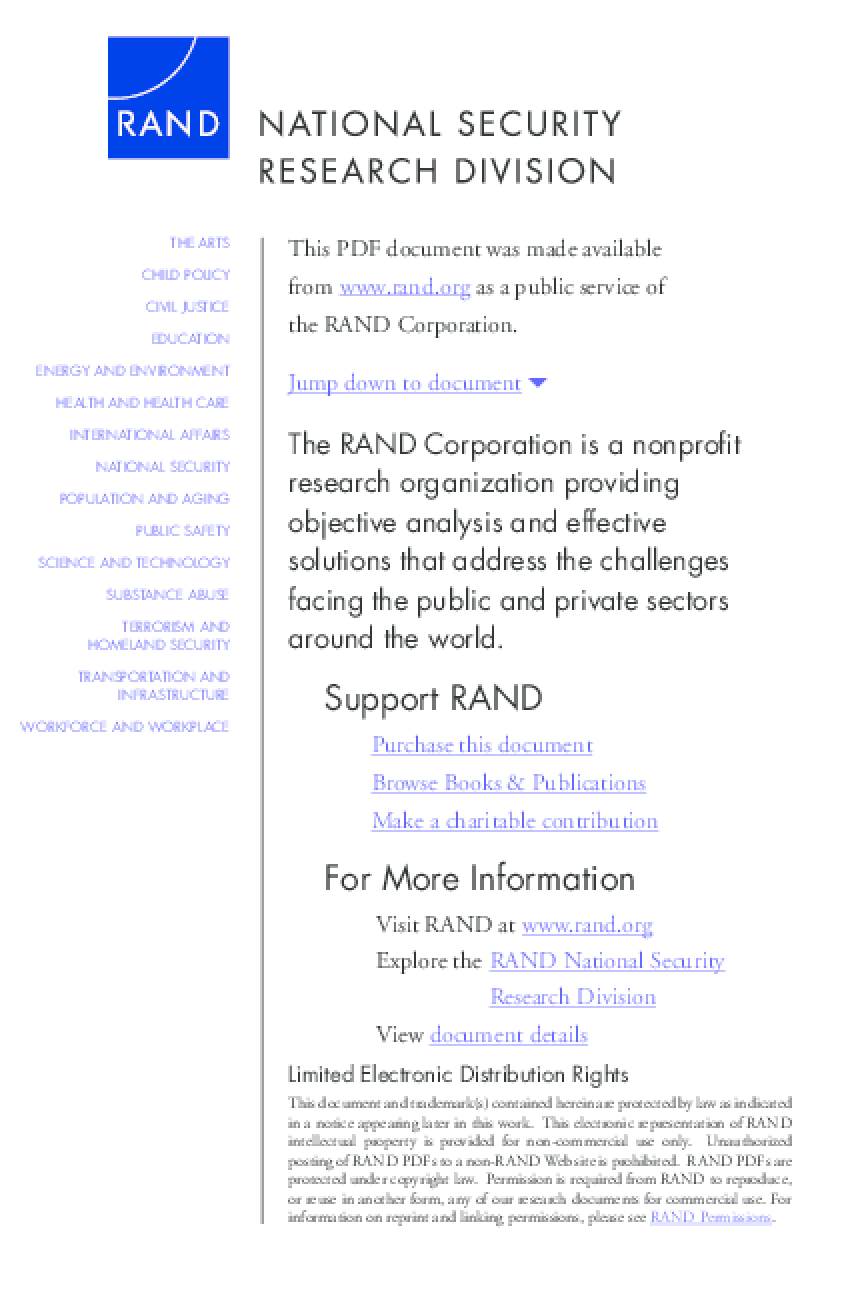 Saudi-Iranian Relations Since the Fall of Saddam: Rivalry, Cooperation, and Implications for U.S. Policy

Examines how the structural, sectarian, and ideological tensions and differences over energy interests between Saudi Arabia and Iran have evolved since 2003. Analyzes the roles of the United States and Iraq and makes policy recommendations. 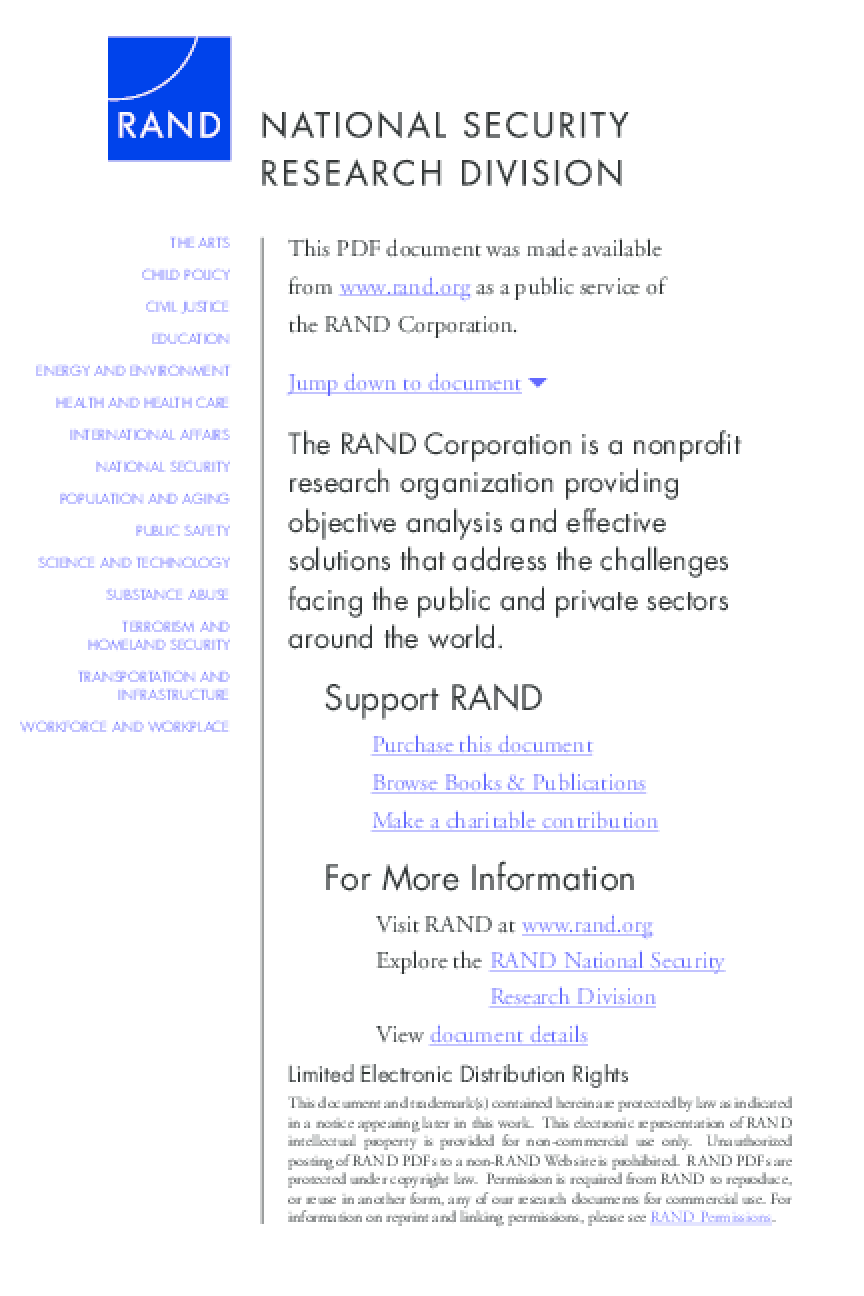 Provides an overview of Iran's political and economic landscape and culture, its diplomatic strategies, and implications for U.S. negotiating policy. Includes analyses of processes, institutions, networks, and actors and a case study of the nuclear issue.

Examines whether charter schools draw high- or low-achieving students, how they affect the racial mix in the city's public schools, what achievement gains they realize, and what longer-term outcomes, as in graduation and college-entry rates, are expected.