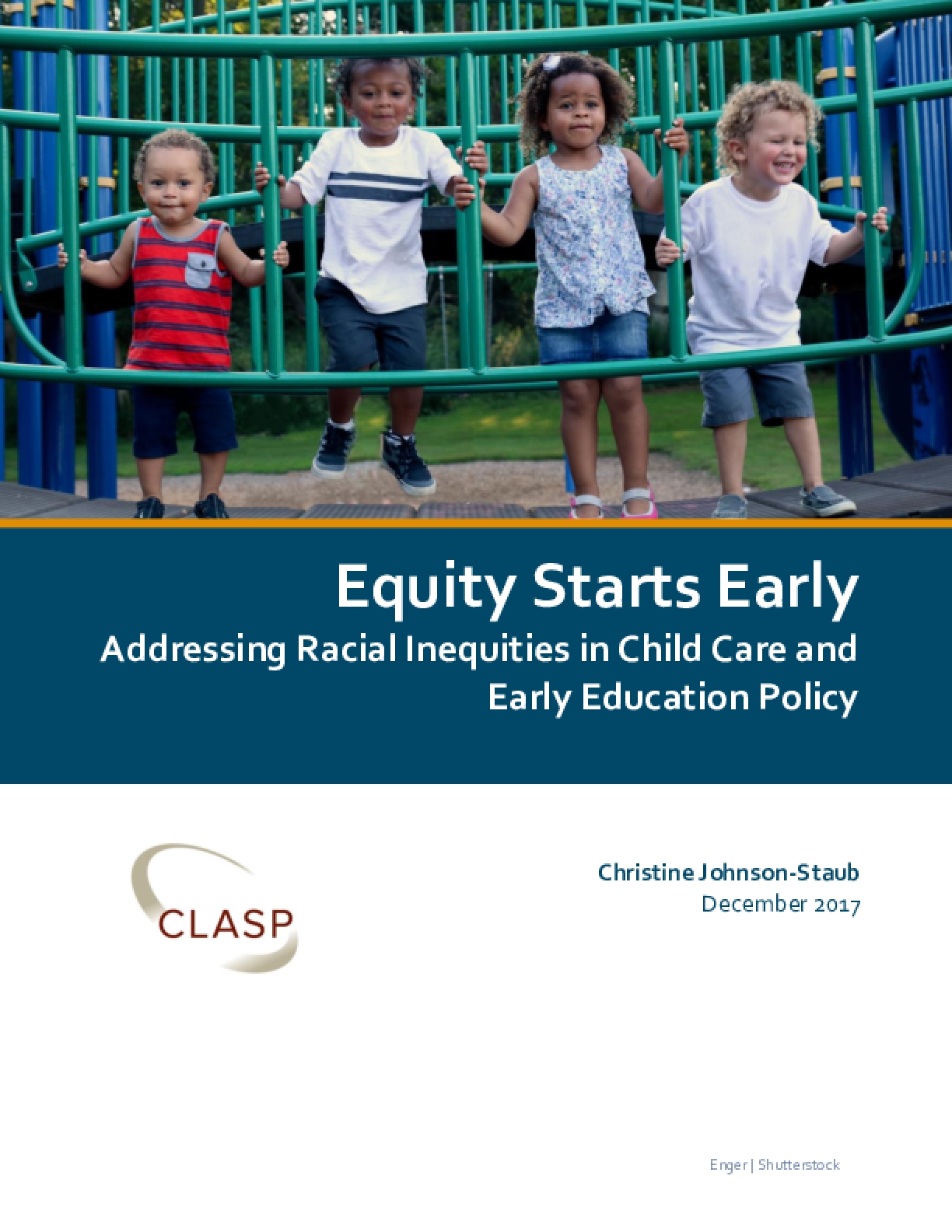 Child care and early education policies are shaped by a history of systemic and structural racism. As a result, there are major racial disparities in children's access to quality child care that meets their cultural and linguistic needs and enables their parents to work. Early care and education workers are overwhelmingly in low-quality jobs with inadequate compensation. And workers of color are often relegated to the lowest-paid positions.According to research, high-quality child care and early education is critical to children's development and family economic stability, particularly for low-income children and parents. It is critical that children of all racial, ethnic, linguistic, and cultural backgrounds have equitable access to quality early childhood programs. Further, such programs should employ a diverse workforce with equitable access to high-quality jobs that include compensation reflecting the importance and difficulty of their work as well as the field's increasing qualifications.Addressing racial inequities in the early childhood system will require increased investments at the state and federal levels and smart policy decisions about expectations for, and delivery of, child care and early education. 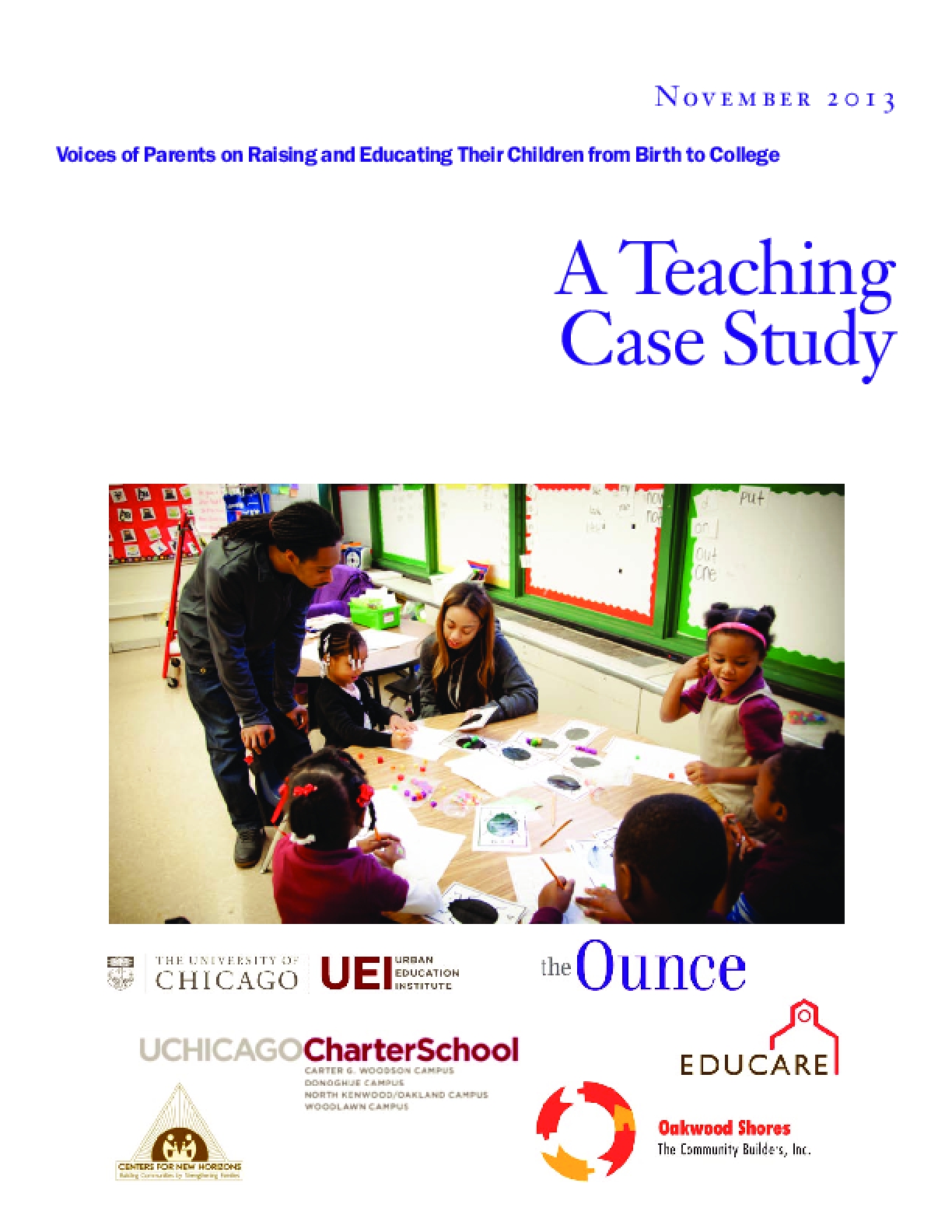 Voices of Parents on Raising and Educating Their Children from Birth to College: A Teaching Case Study

This case study helps to fill the gap between the valuable assets that parents bring to their children's learning and the lack of attention given to parental voices in discourse about the current and future condition of public education for students from the earliest years through young adulthood. It presents the self-constructed narratives of twenty-oneparents about how parents, themselves, think about and work towards the development, education, and future successes of their children. 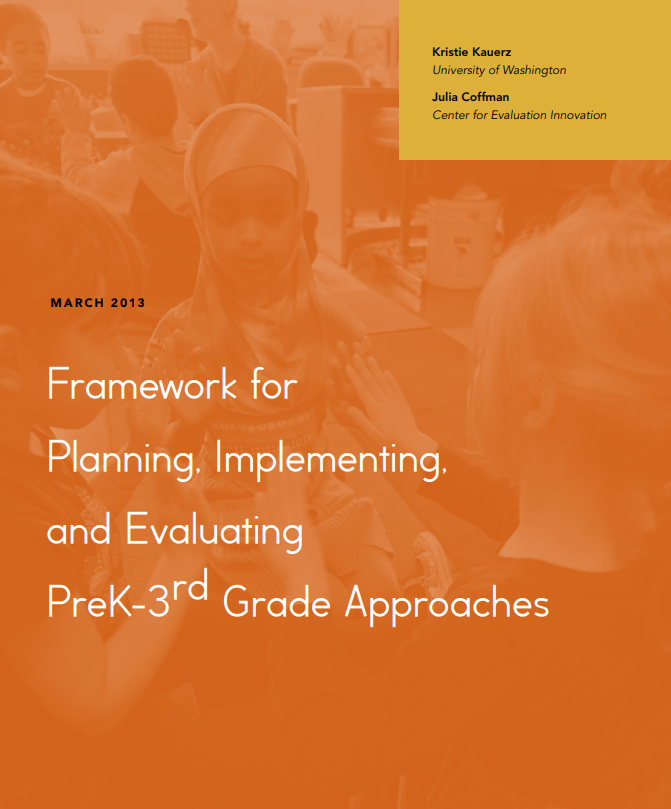 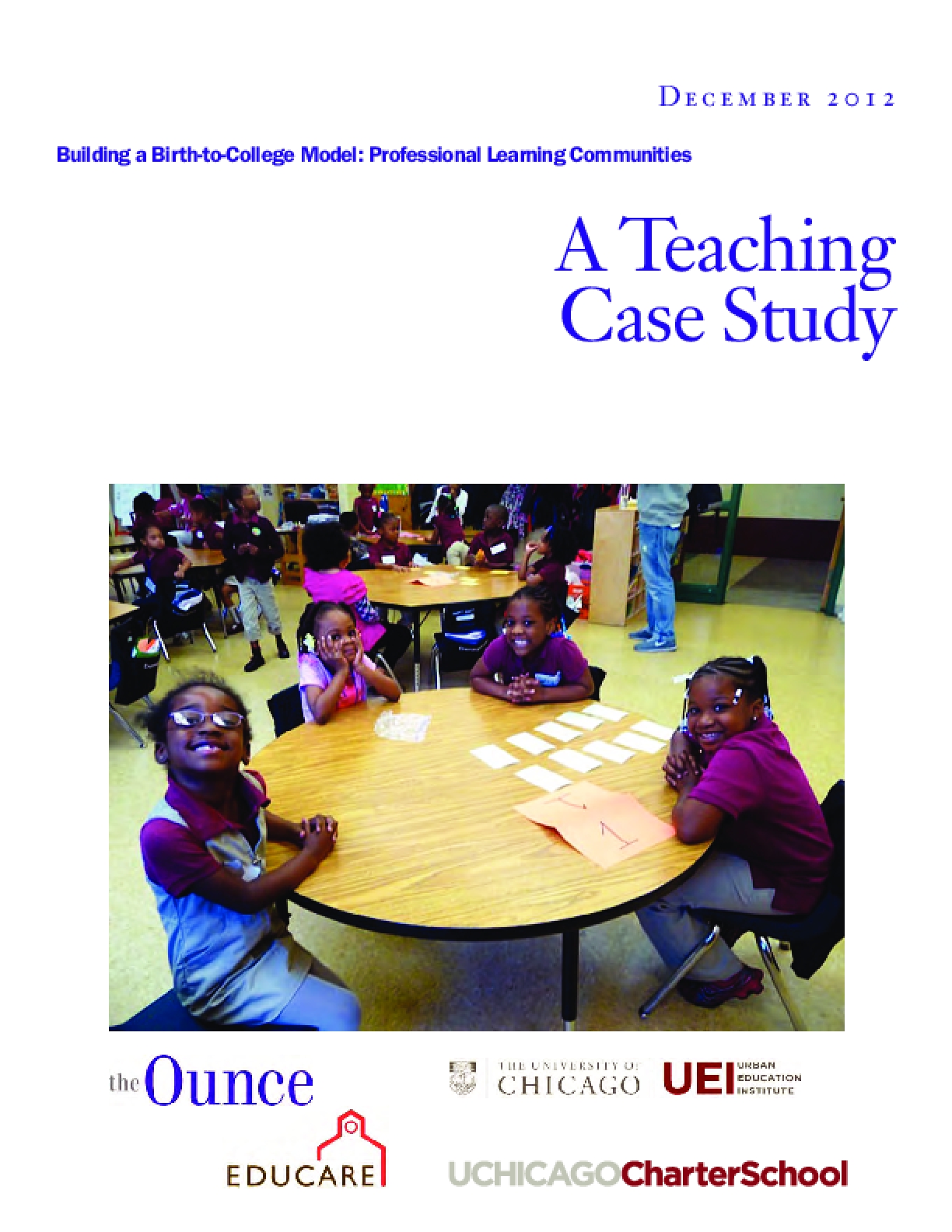 The newest in a planned series of case studies on building a birth-to-college model of education released by the University of Chicago Urban Education Institute (UEI) and the Ounce of Prevention Fund this case study outlines how to create professional learning communities (PLCs) of teachers, administrators and family support staff spanning the early childhood to K-12 spectrum. The intent of the PLCs is to create environments where practitioners take the lead in collaboratively studying and piloting effective, developmentally informed practices that prepare children for college, beginning at birth.This teaching case study is intended to illustrate the evolutionary process of PLC development by UEI and the Ounce and inform the work of others interested in building similar birth-to-college systems to benefit children and families. It is based on interviews of 25 participants in the Birth-to-College Partnership, observations of PLC and other Birth to-College Partnership meetings over the six-month period between January 2012 and June 2012, and a review of Birth-to-College meeting notes and other documents dating back to June 2010. 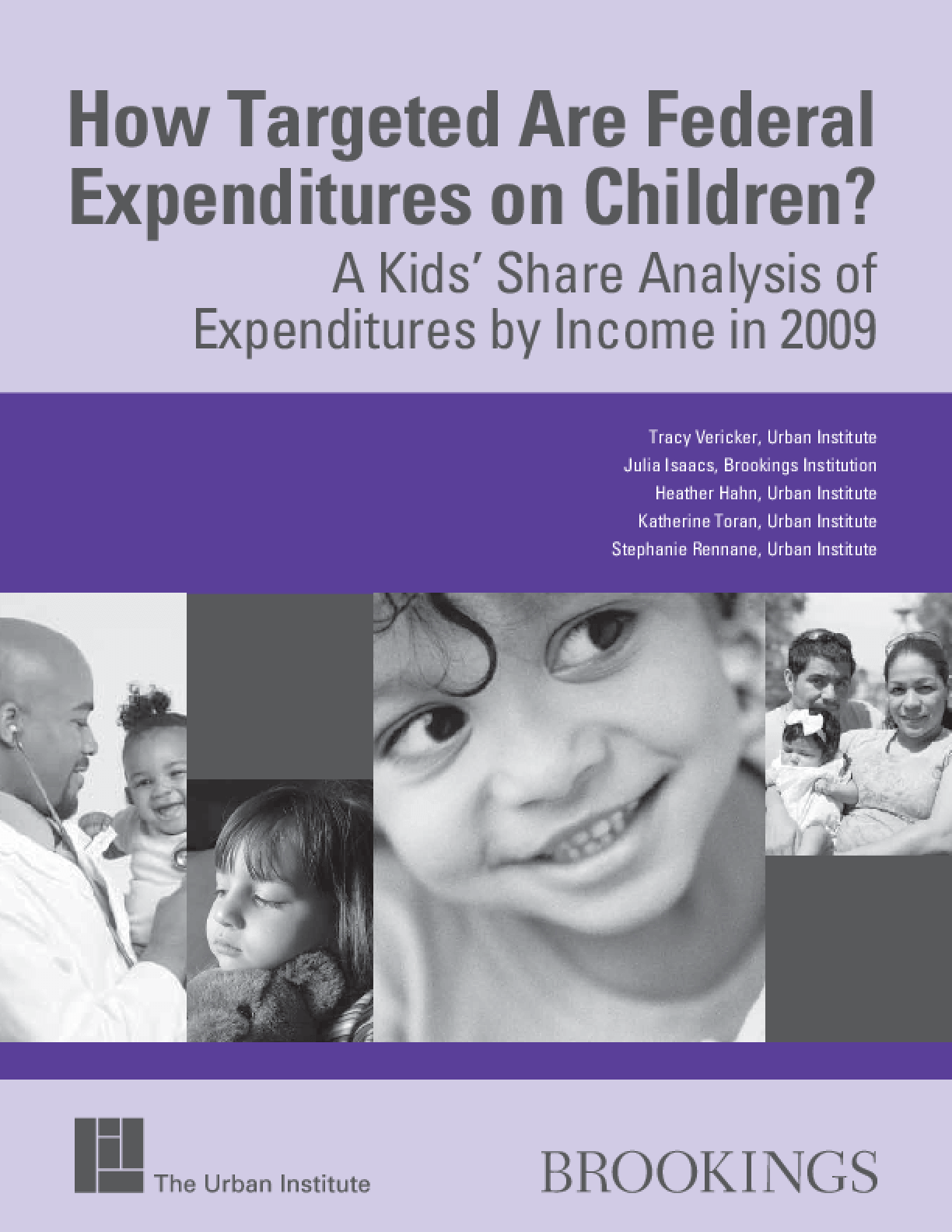 Analyzes the distribution of government spending on children by family income; category, such as health, social services, and education; and program, such as Medicaid; and the extent to which it is targeted to low-income children. Considers implications. 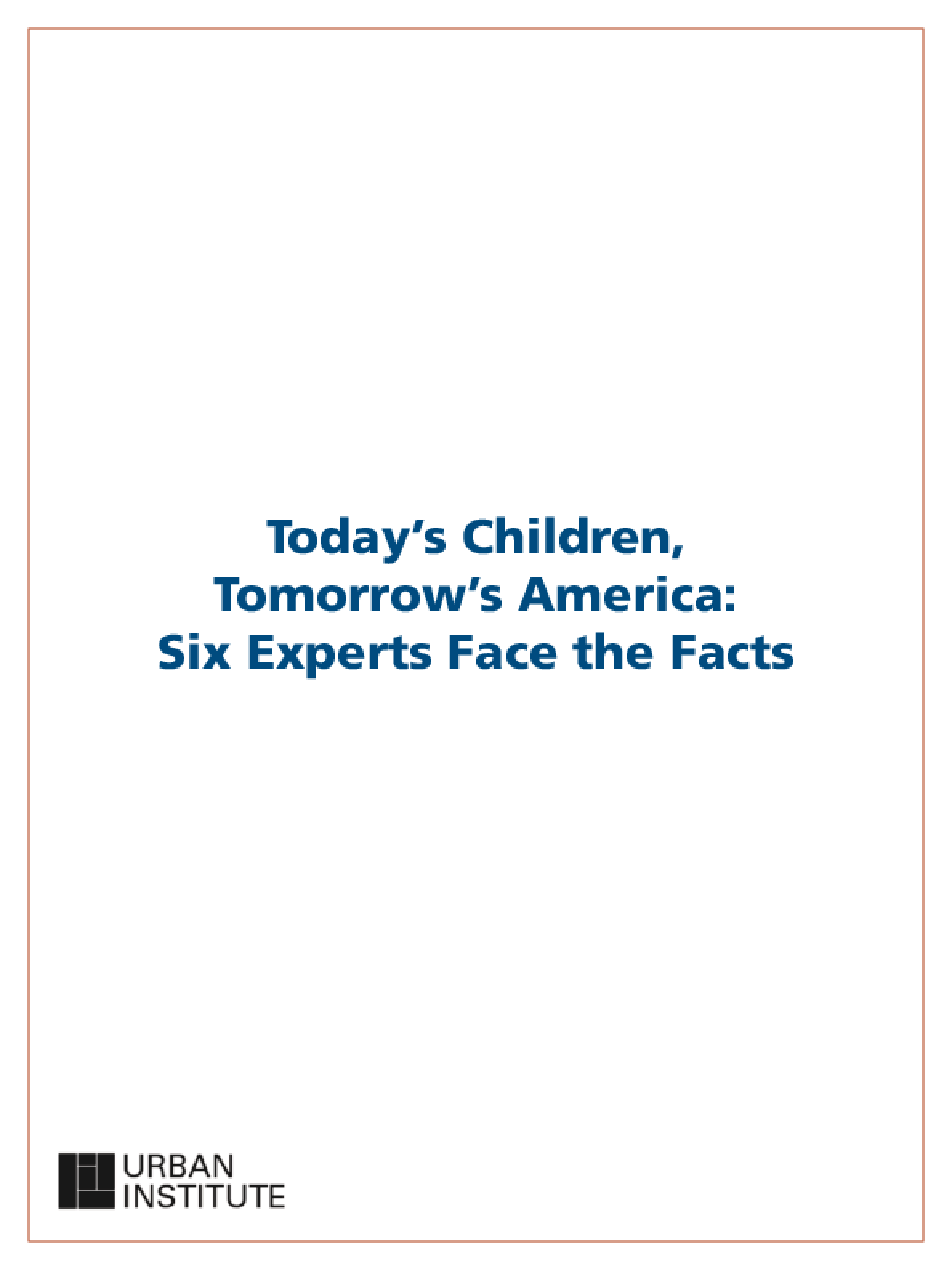 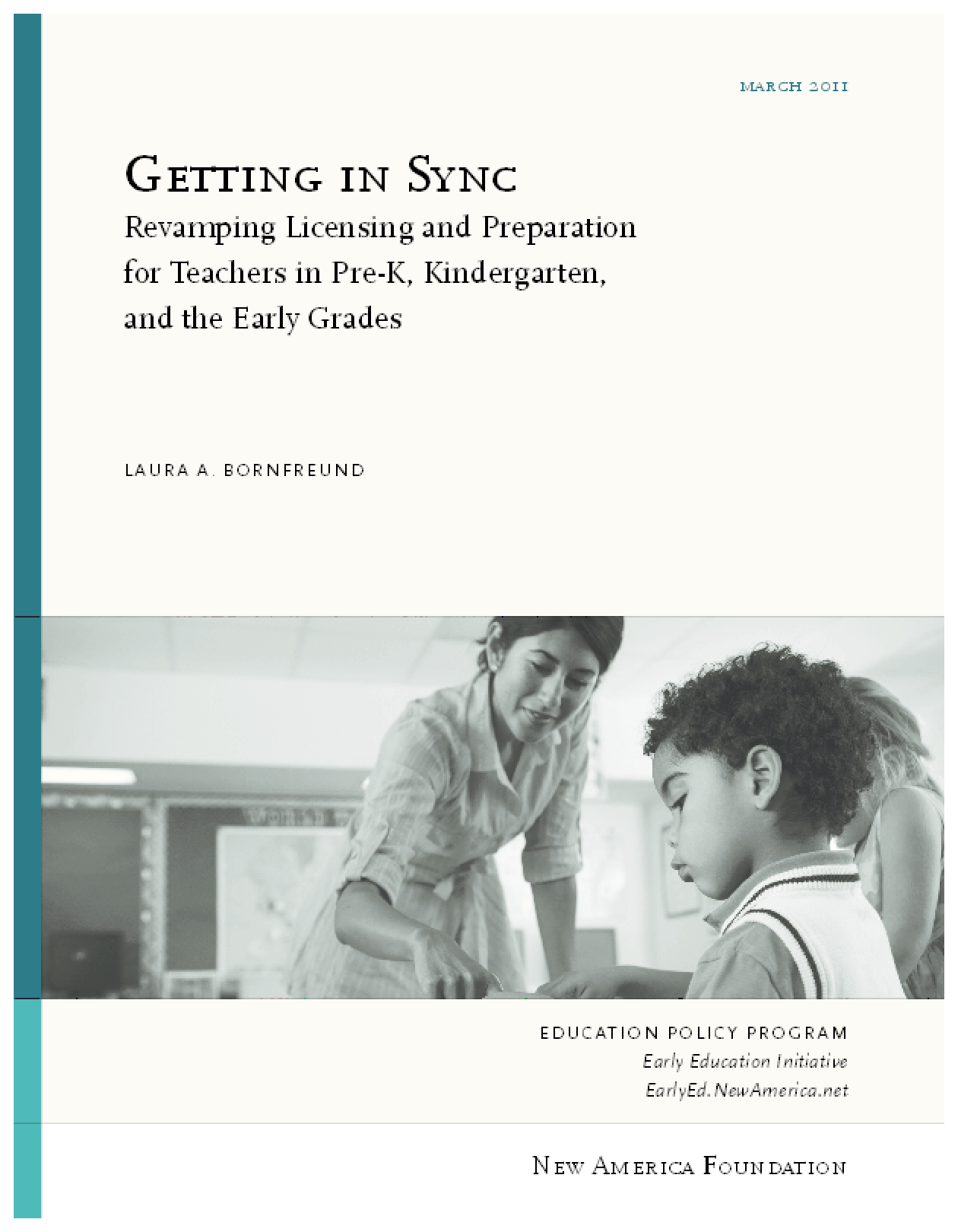 Getting in Sync: Revamping Licensure and Preparation for Teachers in Pre-K, Kindergarten and the Early Grades

Outlines the challenges in teacher preparation and licensure, with a focus on pre-K through third grade; promising practices such as increased classroom experience and selectivity; and suggestions for improving teacher preparation programs and policies. 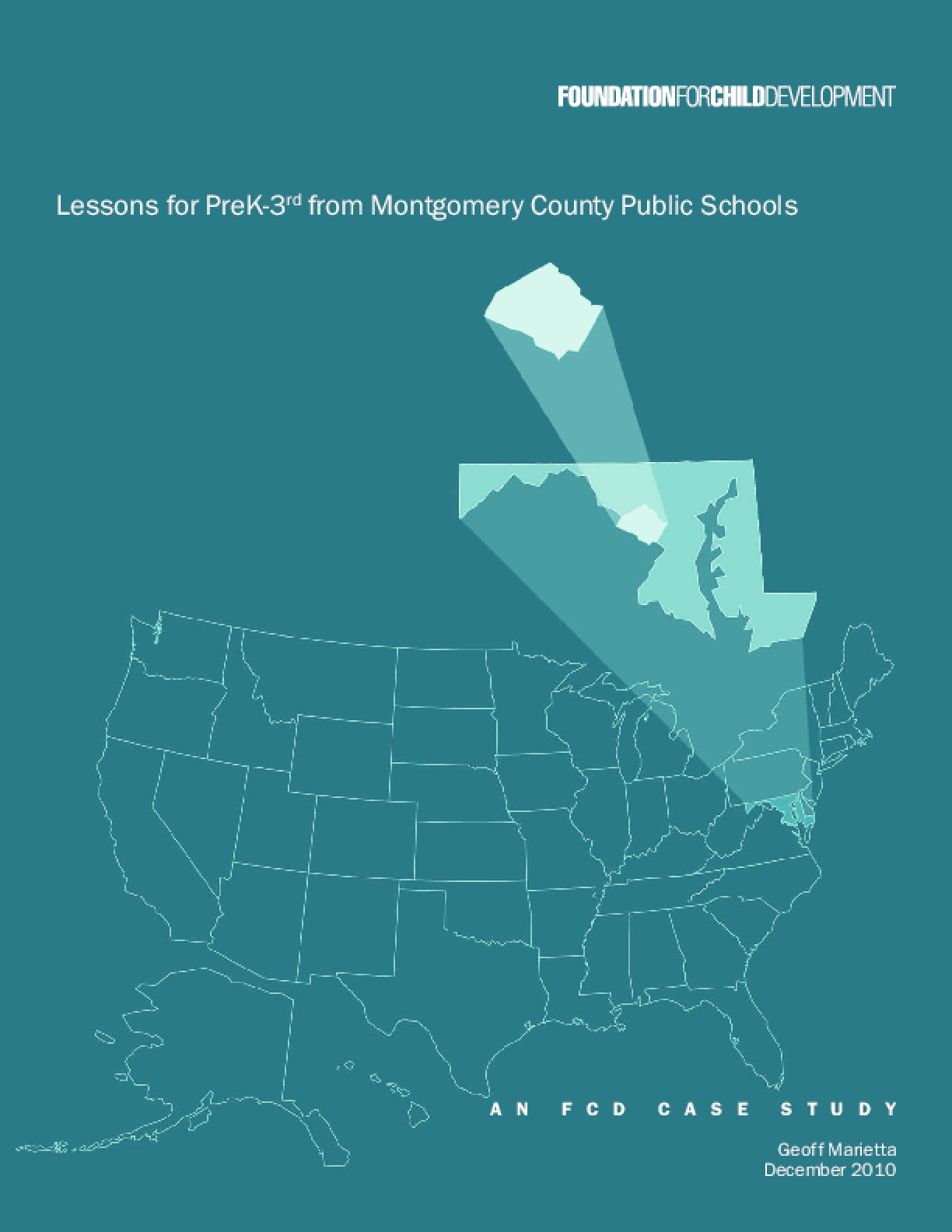 Presents a case study of how a district improved third-grade reading proficiency rates and narrowed the achievement gap, in spite of growing English Language Learner and low-income populations, by implementing an integrated early learning strategy. 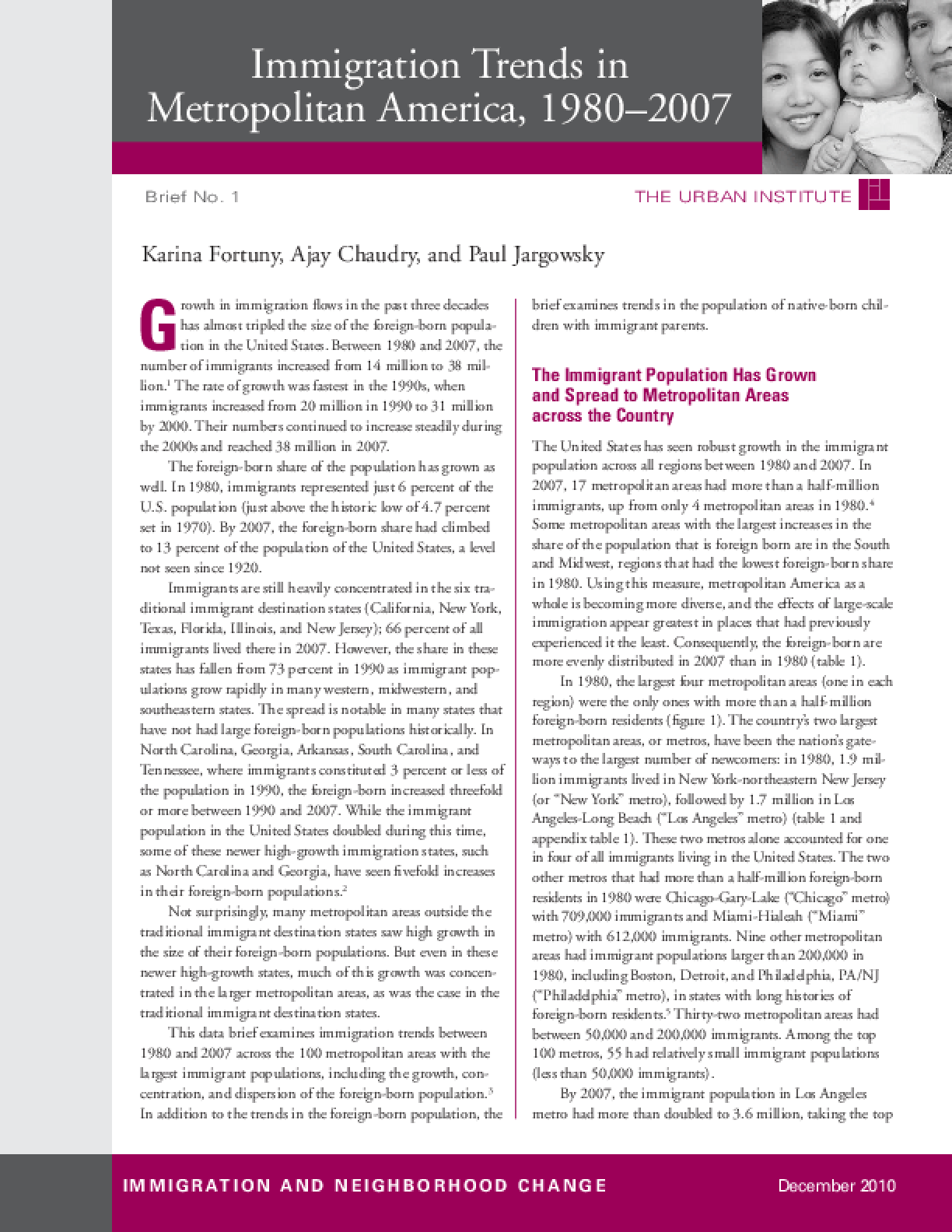 Examines 1980-2007 trends in growth, concentration, and dispersion of immigrants and their U.S.-born children across one hundred metropolitan areas with the largest immigrant populations, as well as poverty rates by race/ethnicity and region of origin. 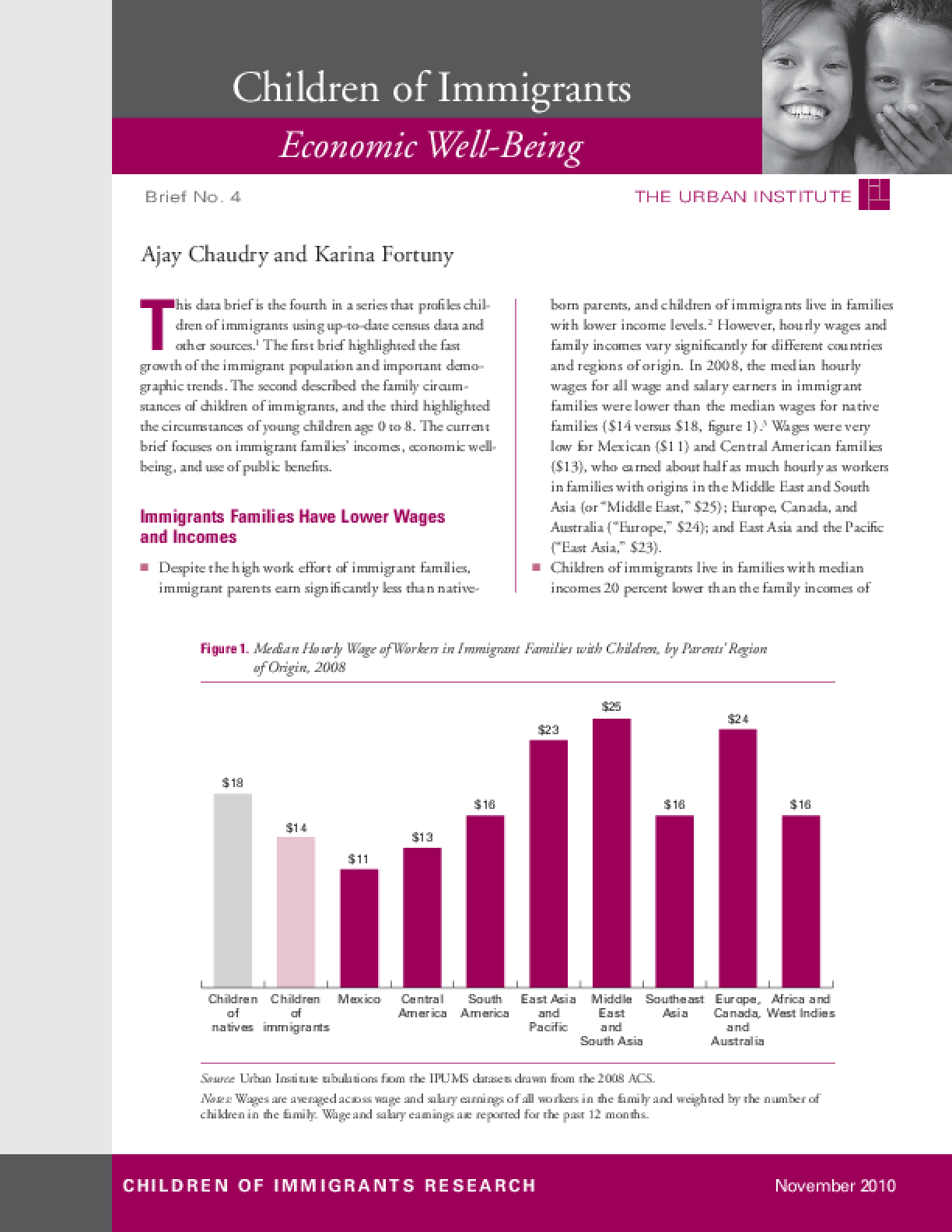 Explores the family incomes; economic well-being, including food security and housing; and use of public benefits among children of immigrants by parents' country of origin and years in the Unites States and compared with native families. 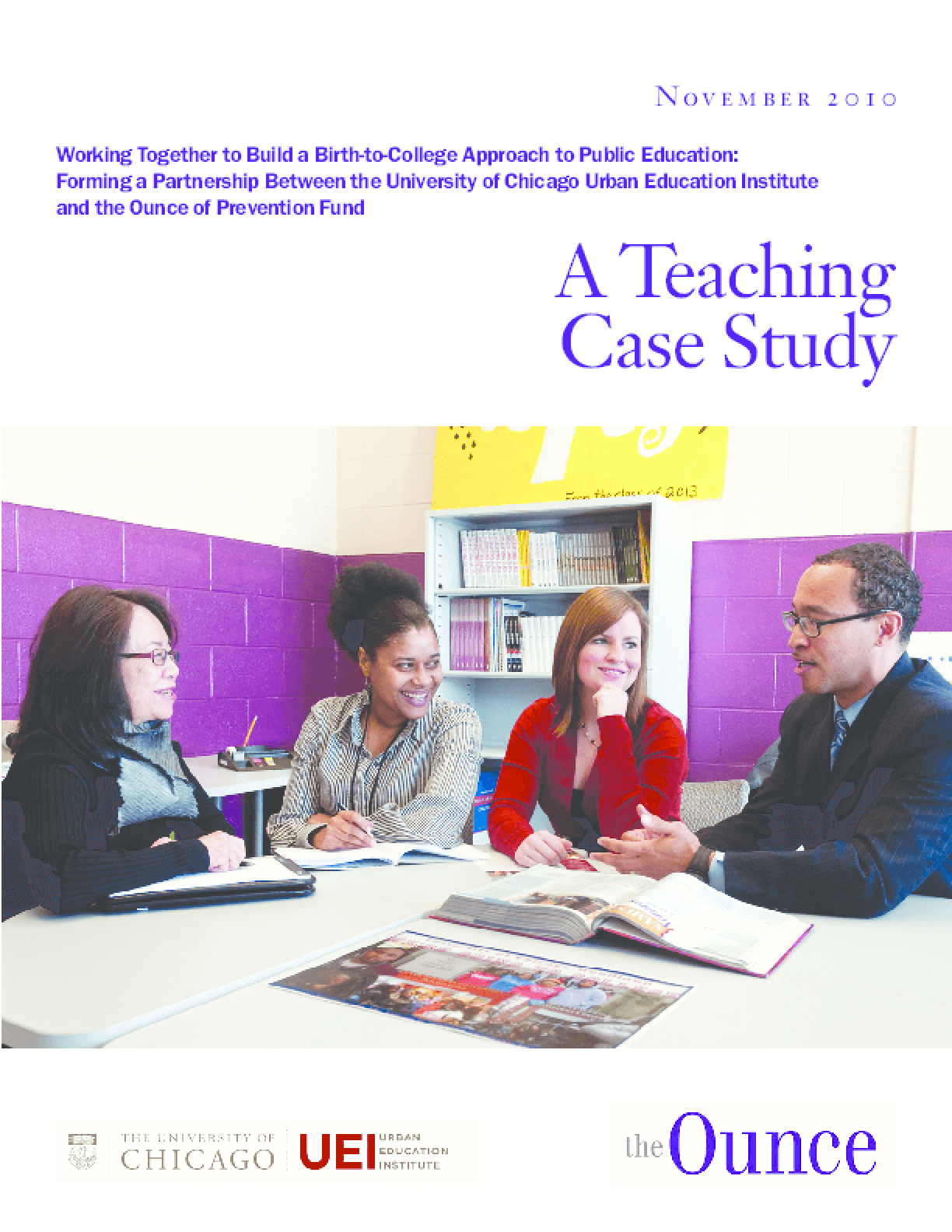 In 2009, the University of Chicago Urban Education Institute (UEI) and the Ounce of Prevention Fund (the Ounce) embarked on an effort to form a partnership whose vision is to "...build a model of public education for children and their families that begins at birth and creates success in school, and life." UEI designed and operates four public charter school campuses offering families a pathway to college for their children that begins with prekindergarten (preK) and continues through high school. The Ounce created and operates the Educare School, which prepares at risk children from birth to age five for success in school. The partnership will initially demonstrate what it means when children begin their education early with Educare, enter UEI's charter campuses for elementary, middle and high school, advance to college, and persist to graduation. Ultimately, the partnership plans to harness and share the academic expertise and real-world experience of members of both organizations. The goal is to collaboratively and continuously align and create instructional practices, and academic and social supports, to demonstrate a new model of public education that seamlessly and successfully prepares children for college, beginning at birth. In the United States, early childhood education (ECE) is not publicly mandated. All children in the U.S. receive public schooling that generally begins with kindergarten. As a result, many children do not have access to sufficient learning opportunities early in life, and may start kindergarten at a disadvantage. Given that K-12 attempts at closing the achievement gap are costly and generally ineffective, calls are being made to prevent the achievement gap from ever occurring. This requires intervention at a very young age, since differences in achievement based on income level can be seen as young as nine months and become larger by kindergarten. Even children who have been exposed to high quality ECE can experience a "fade" of those benefits upon entering K-12, depending on the quality of elementary school. For many children, the achievement gap begins to widen once again. In the city of Chicago, high school graduation rates hover around 50 percent. Of those students who graduate, only 35 percent go on to attend four-year colleges and universities. The numbers grow even smaller for children who are African American, Latino, or low-income. The achievement gap that opens in early childhood tends to widen throughout K-12, and many children who start with a disadvantage at kindergarten never graduate from high school. If they do, they are unlikely to attend and graduate from college. Higher education levels are related to higher incomes, lower levels of unemployment, and other positive outcomes. In order to be competitive in a world where a college degree is increasingly important, the United States must ensure that children graduate high school and are prepared to graduate from college. Preventing an achievement gap and ensuring that the fade of benefits from high-quality ECE does not occur in elementary school, while at the same time raising the bar to "college for all," requires collaboration between the worlds of ECE and K-12. In the United States, however, there exists a structural divide between the two fields. Despite the fact that they share similar goals for educating children, policies, standards, and funding streams contribute to a "disconnect." The partnership's goals are to effect change in public education by creating a demonstration model of birth-to-grade 12 education that prepares students for success in college and life. In order to accomplish this, the two organizations will work together to share expertise, and align and co-create practices, to ensure the best possible chance for success for students. The partnership first needed to be established, strengthened, and trusted by key players from each organization -- this was not a simple task. UEI and the Ounce began this effort by developing a roadmap that includes a shared vision and mission, core values, and goals and activities of the partnership. We focus here on the formation of the shared vision and mission, a document that represents the goals and aspirations of the partnership between the two organizations. In the service of creating this document, a working group comprised of educators, administrators, researchers, and teacher leaders from each organization was formed. The working group used an iterative process, where they revised, questioned, and adjusted the roadmap during a series of ten three-hour meetings that took place over the course of nine months and were facilitated by a specialist. Working group members' testimonies about their experiences participating in the group are referenced in this study. We will also review iterations of the shared vision and mission as they changed over time. 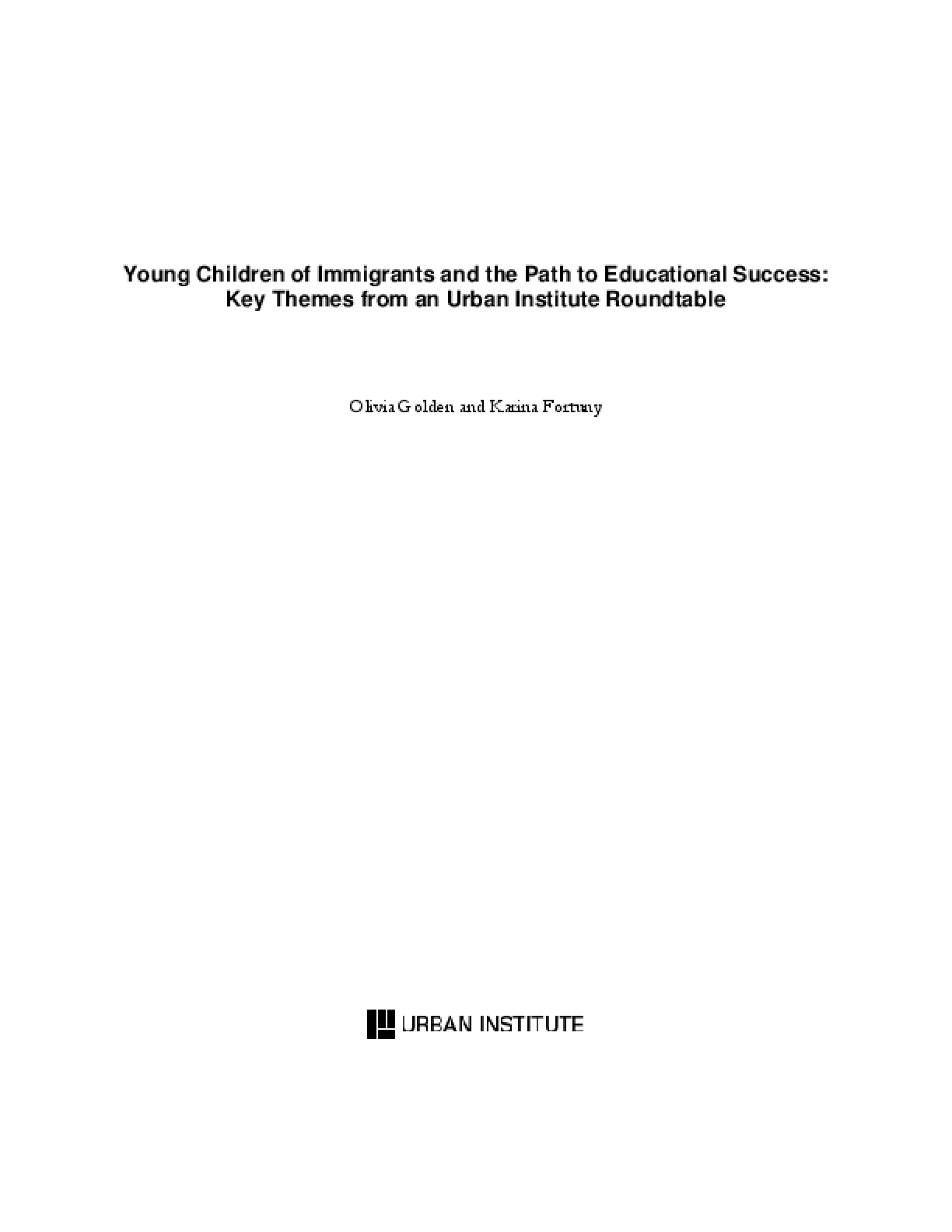 Young Children of Immigrants and the Path to Educational Success

Summarizes June 2010 discussions on the needs of immigrant children age 3 to 8 and policy opportunities. Examines access to high-quality early care and education and elementary education for English language learners, as well as parent-focused strategies.