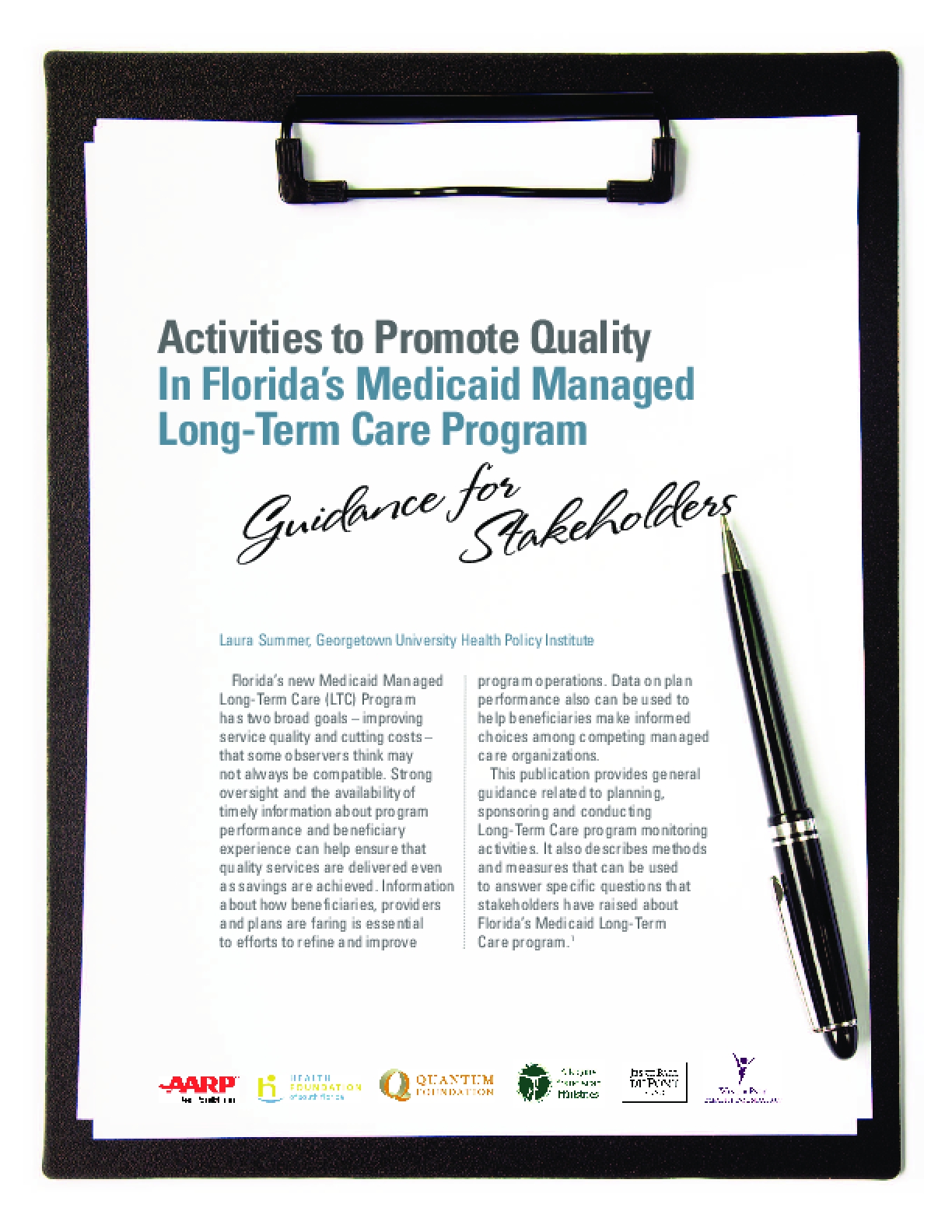 Florida's new Medicaid Managed Long-Term Care (LTC) Program has two broad goals – improvingservice quality and cutting costs – that some observers think may not always be compatible. Strongoversight and the availability of timely information about program performance and beneficiaryexperience can help ensure that quality services are delivered even as savings are achieved. Information about how beneficiaries, providers and plans are faring is essential to efforts to refine and improve program operations. Data on plan performance also can be used to help beneficiaries make informed choices among competing managed care organizations.This publication provides general guidance related to planning, sponsoring and conductingLong-Term Care program monitoring activities. It also describes methods and measures that can be used to answer specific questions that stakeholders have raised about Florida's Medicaid Long-TermCare program. 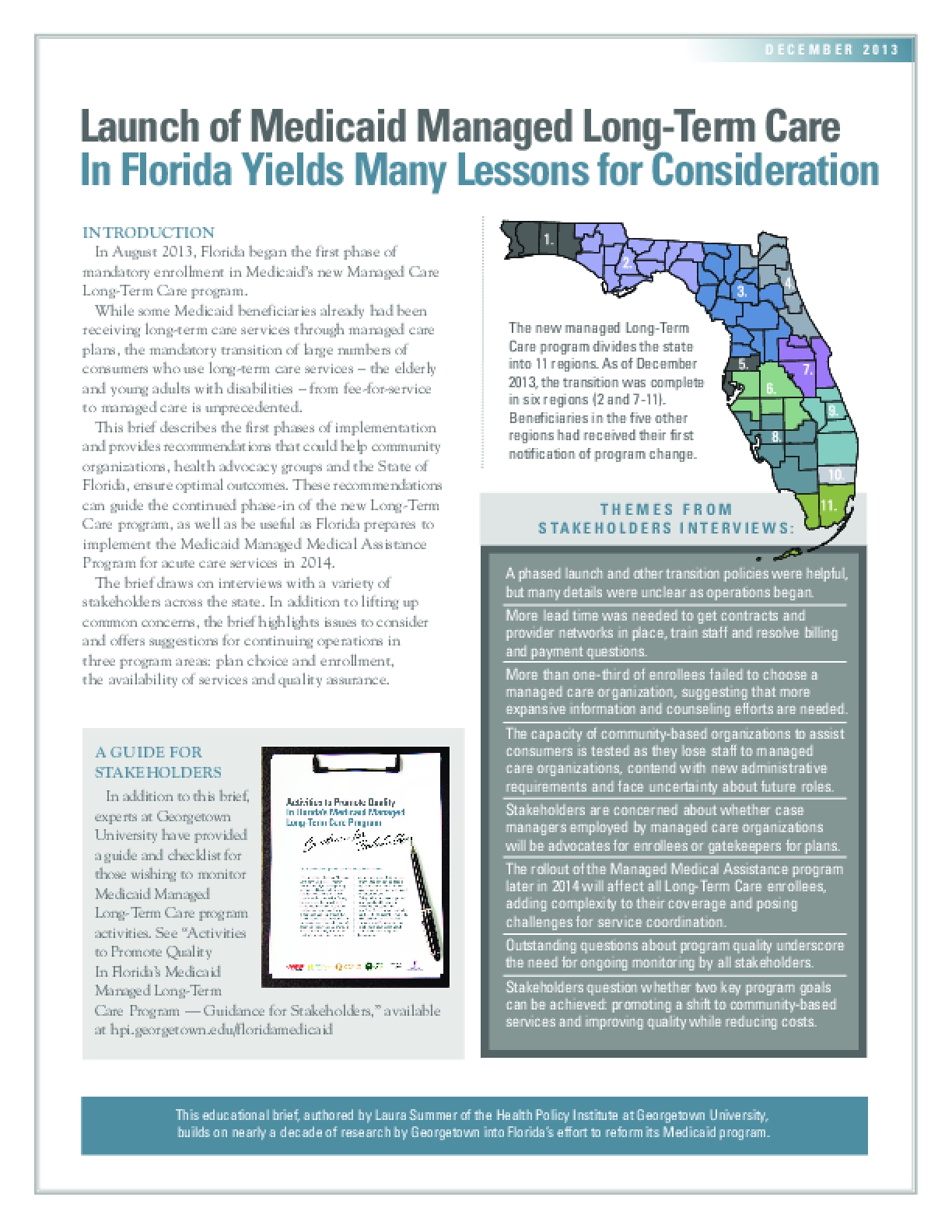 In August 2013, Florida began the first phase of mandatory enrollment in Medicaid's new Managed Care Long-Term Care program.While some Medicaid beneficiaries already had been receiving long-term care services through managed care plans, the mandatory transition of large numbers of consumers who use long-term care services – the elderly and young adults with disabilities – from fee-for-service to managed care is unprecedented.This brief describes the first phases of implementation and provides recommendations that could help community organizations, health advocacy groups and the State of Florida, ensure optimal outcomes. These recommendations can guide the continued phase-in of the new Long-TermCare program, as well as be useful as Florida prepares to implement the Medicaid Managed Medical Assistance Program for acute care services in 2014.The brief draws on interviews with a variety of stakeholders across the state. In addition to lifting up common concerns, the brief highlights issues to consider and offers suggestions for continuing operations in three program areas: plan choice and enrollment, the availability of services and quality assurance. 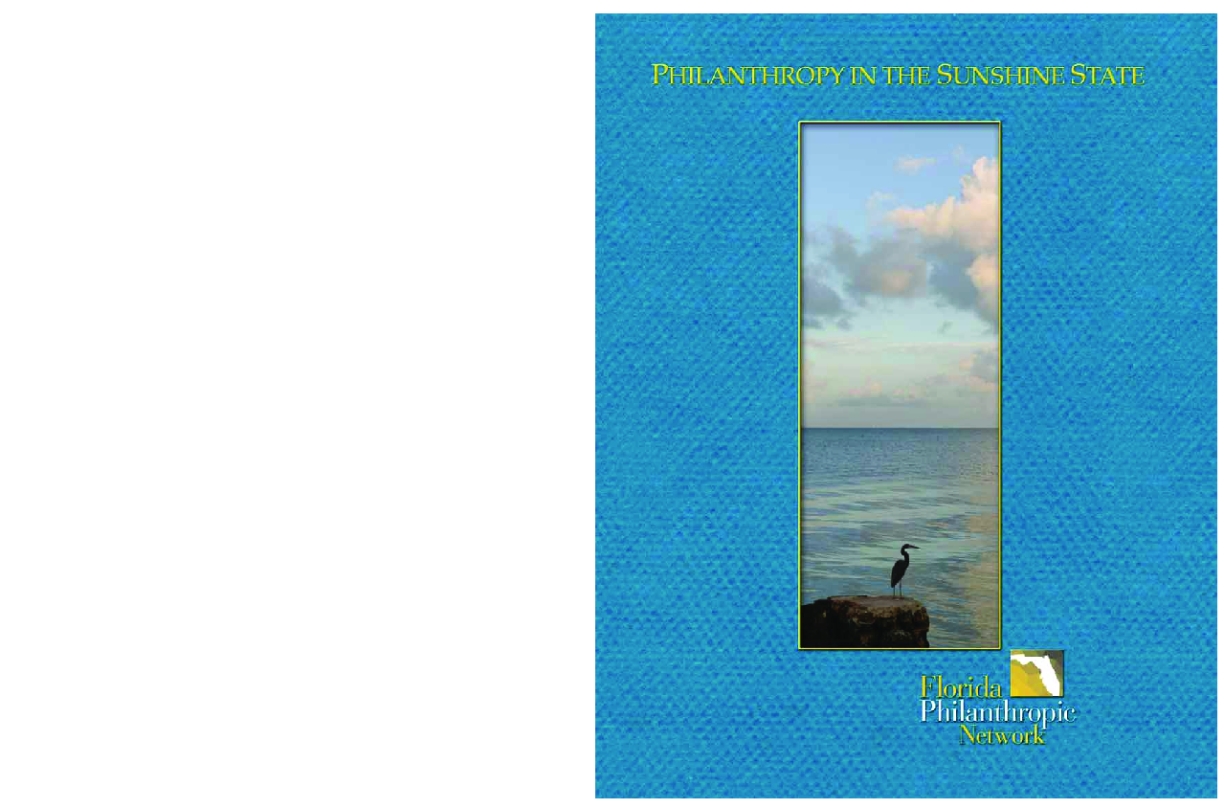 Philanthropy in the Sunshine State: A Comprehensive Look at Florida’s Grantmaking Foundations and Donors

Florida philanthropy at the turn of the 21st century resembles in many ways America's golden age of philanthropy almost a century earlier. The past decade, in particular, has been characterized by significant growth – in wealth creation, in philanthropic assets and in philanthropic activity. Indeed, new generations of Florida donors have used this wealth to create major new medical centers, symphony orchestras, universities and community organizations of every kind.Philanthropy in Florida reflects the unique character of the state – large, diverse, warm, open and mobile. It is powered by the resources and passions of people drawn to the Sunshine State in pursuit of opportunity and a good life.Despite growth in philanthropic assets and activity during the past decade, the changing role of government, persistent poverty, the increasing mobility of people and unprecedented human population growth have combined to create a more complex philanthropic environment than ever before.Philanthropy in the Sunshine State presents a comprehensive look at Florida foundations and individual donors – where they are, what they do, and the scope and focus of their charitable activity. It was developed not only to provide the first statewide overview of philanthropy in Florida, but also to compare Florida's giving patterns to giving patterns in other southeastern states and to the nation as a whole. It also divides the state into six regions, and compares the philanthropic assets and giving patterns of these regions to one another.Our aim is to organize philanthropic data in a useful way and encourage an informed discussion about how to promote greater private giving and the proper role of volunteer philanthropy in public life. We hope public officials, nonprofit and business leaders, individual donors, organized philanthropies, journalists and policy makers alike will use this report to form a realistic and deeper appreciation of Florida's independent sector.Philanthropy in the Sunshine State will serve as a benchmark against which we will measure future philanthropic activity. It is based largely on information obtained from the Internal Revenue Service, U.S. Census Bureau and the Foundation Center. The report focuses primarily on private independent, family and corporate foundations, community foundations, hospital conversion foundations, and on individual giving as reported on federal income tax returns. For regionaldata on individual giving, the report relies on IRS data from 1997, the only year for which county-level data are available. Excluded from this report is information about an estimated 240 single-purpose Florida foundations – organizations established to support a single university, hospital or other nonprofit institution. Also excluded is information about the substantial cash andin-kind giving by individuals to religious institutions and grassroots community groups throughout the state. Most of this philanthropy comes from the majority of taxpayers who do not itemize their returns.