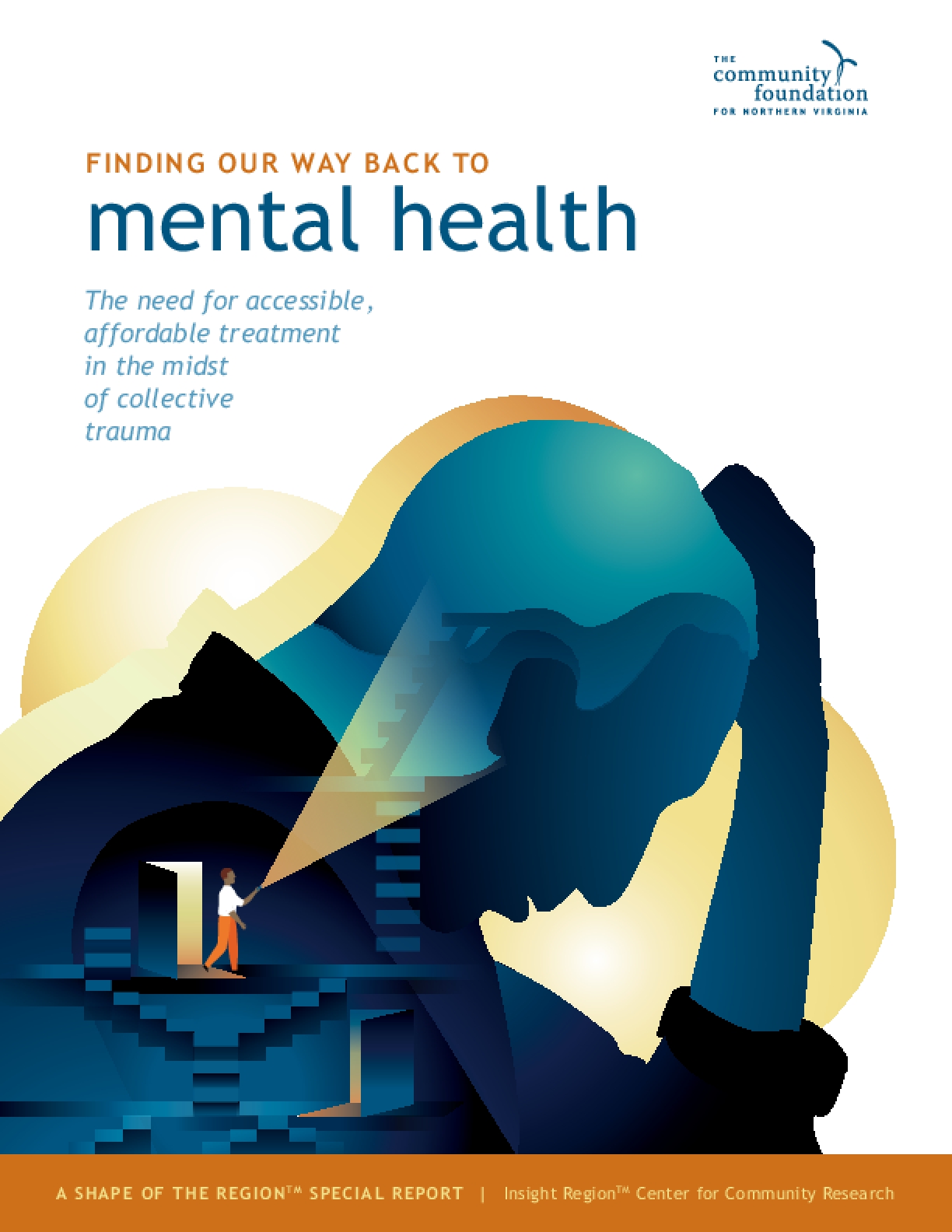 Finding our Way Back to Mental Health: The Need for Accessible, Affordable Treatment in the Midst of Collective Trauma

In 2019, about 8 percent of the population was dealing with "active symptoms" of anxiety or depression. Now, that figure is 28%, a fourfold increase impacting over a half million adults in Northern Viginia. This doesn't include some 200,000 adults whose anxiety and depression levels are transient, but have received, or sought to receive medication or talk therapy in the previous four weeks. In total, whilst 750,000 adults in Northern Virginia have mental health needs, 370,000 who want therapy or counselling are unable to get it.This report investigates four systemic barriers to people getting the care they need, offering recommendations on how Northern Virginia can work to support this large group of people by addressing systemic barriers to treatment, and what the roles the nonprofit sector, from foundations to community programs and others, can play. 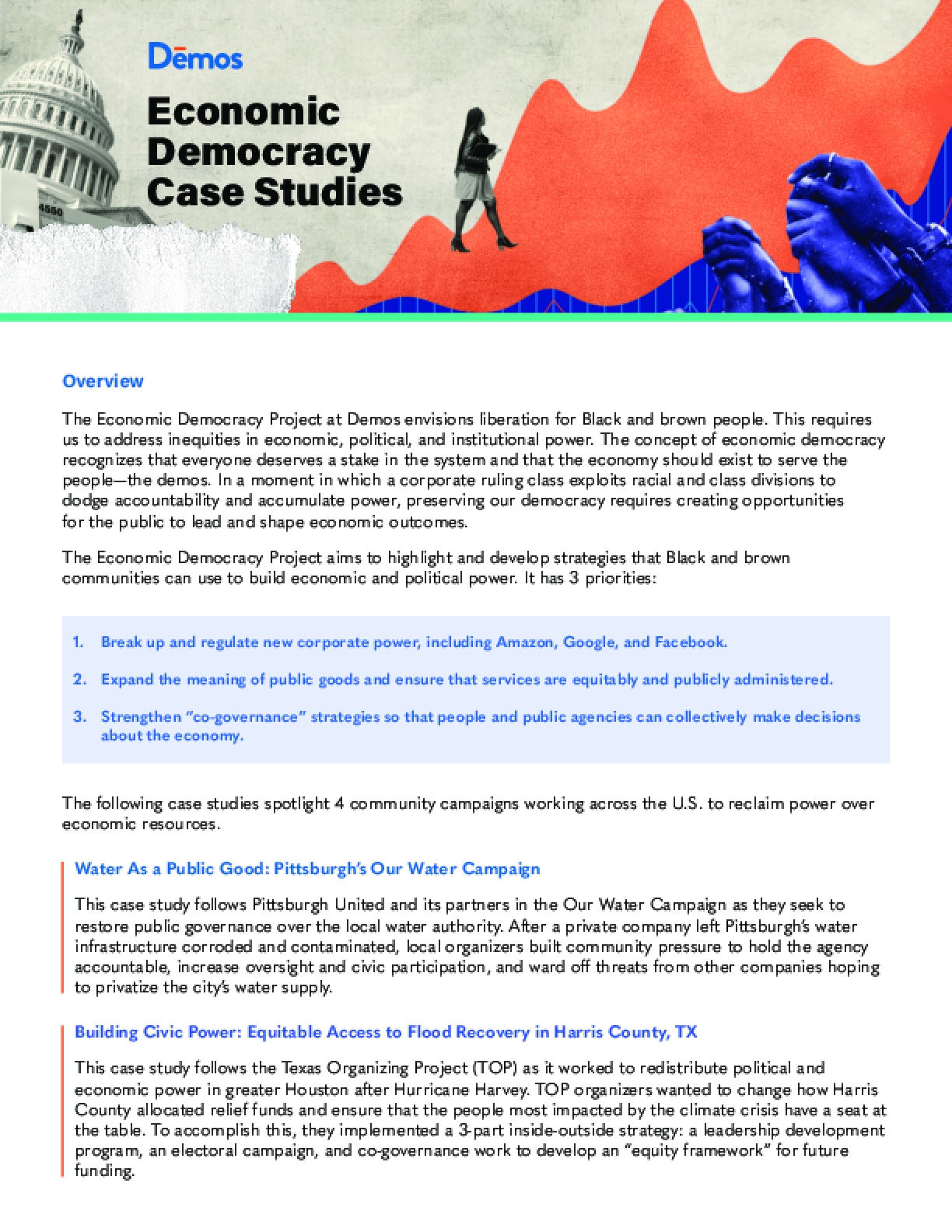 The Economic Democracy Project at Demos envisions liberation for Black and brown people. This requires us to address inequities in economic, political, and institutional power. The concept of economic democracy recognizes that everyone deserves a stake in the system and that the economy should exist to serve the people—the demos. In a moment in which a corporate ruling class exploits racial and class divisions to dodge accountability and accumulate power, preserving our democracy requires creating opportunities for the public to lead and shape economic outcomes.The Economic Democracy Project aims to highlight and develop strategies that Black and brown communities can use to build economic and political power. It has 3 priorities:Break up and regulate new corporate power, including Amazon, Google, and Facebook.Expand the meaning of public goods and ensure that services are equitably and publicly administered.Strengthen "co-governance" strategies so that people and public agencies can collectively make decisions about the economy.The case studies outlined here spotlight 4 community campaigns working across the U.S. to reclaim power over economic resources. 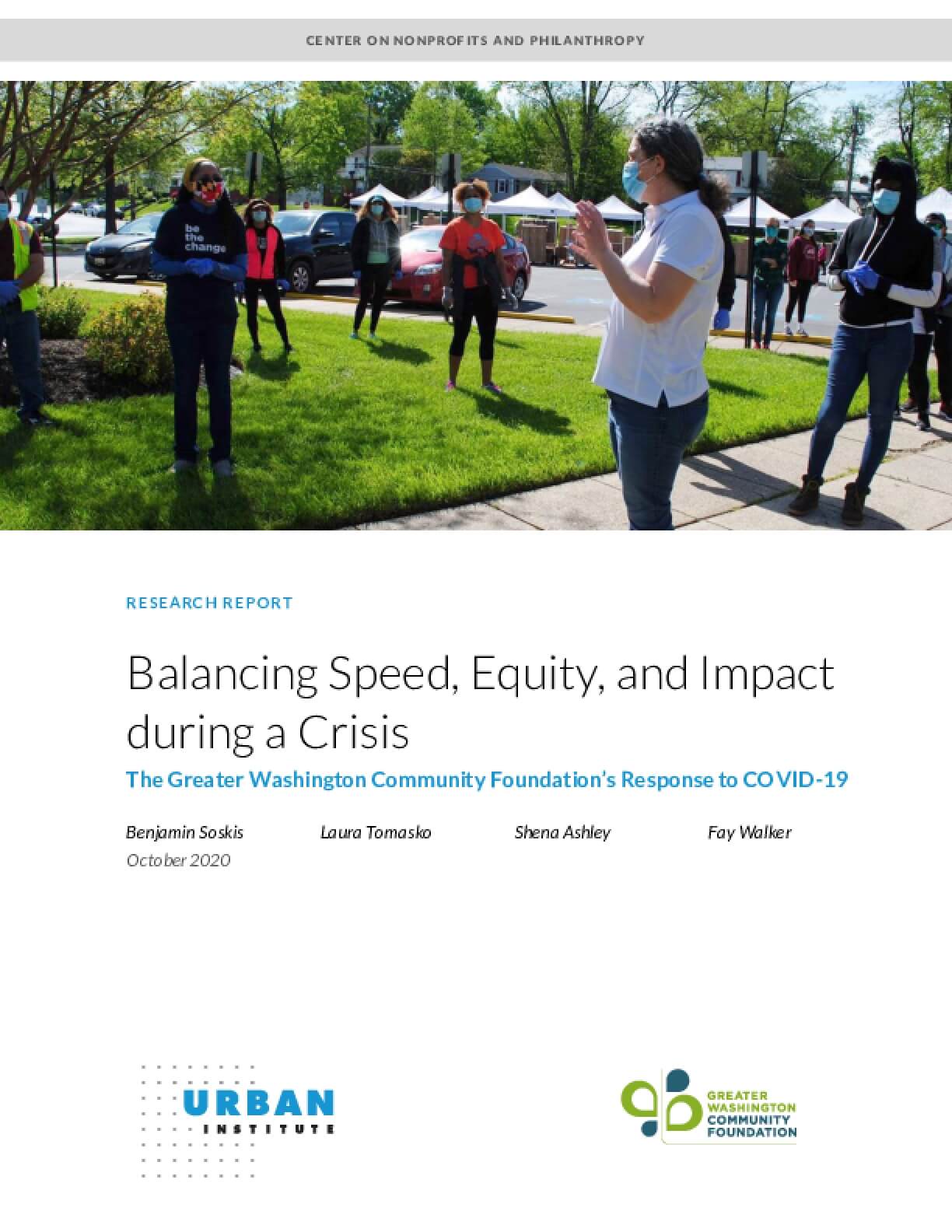 Balancing Speed, Equity, and Impact during a Crisis: The Greater Washington Community Foundation’s Response to COVID-19

This report chronicles the genesis and evolution of the Greater Washington Community Foundation's efforts to raise and coordinate funding from a wide range of individual and institutional donors to address the devastating effects of the COVID-19 pandemic. With a particular focus on The Community Foundation's COVID-19 Emergency Response Fund, the largest of its kind in the region, this account highlights the balance of various grantmaking imperatives that characterized Greater Washington's philanthropic response to the pandemic more generally. 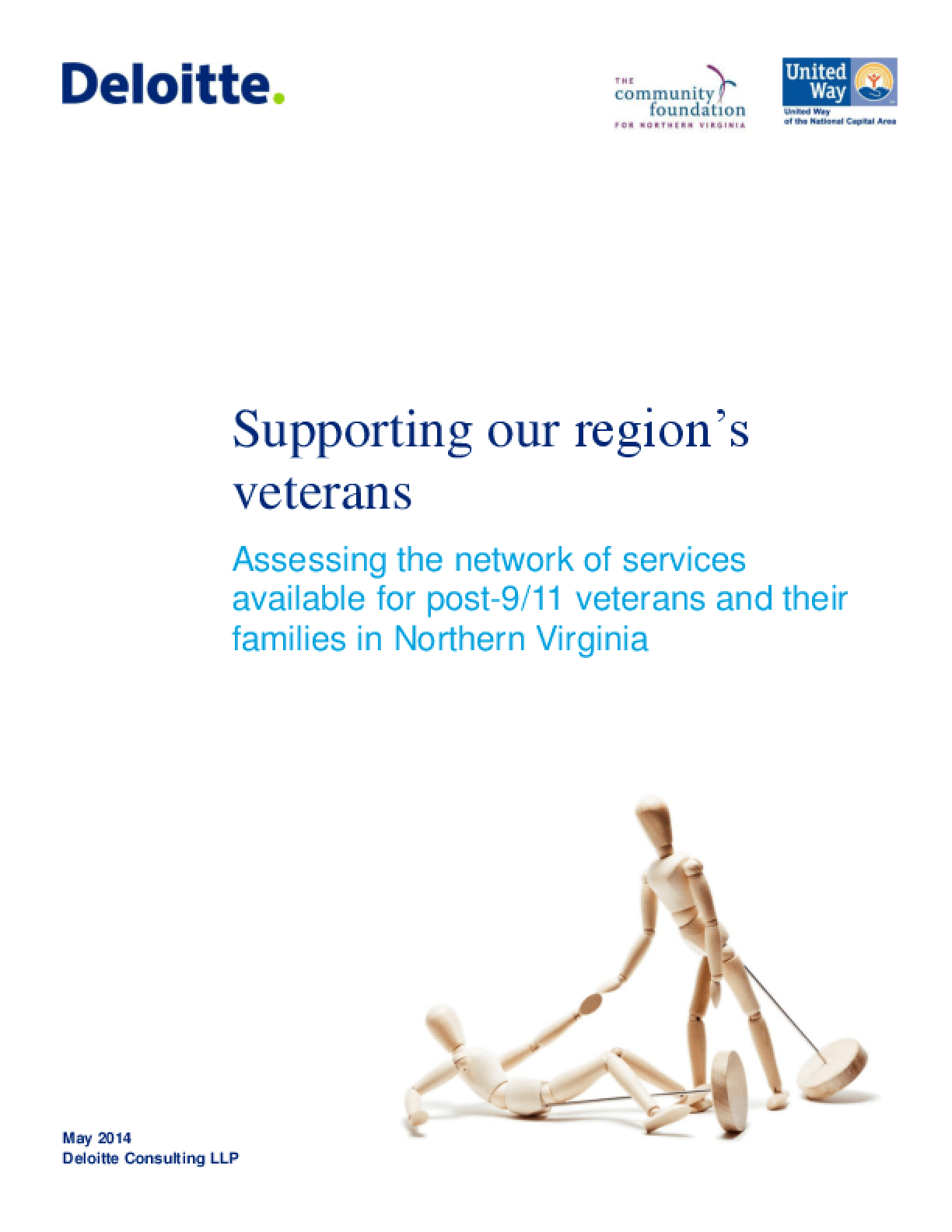 Supporting Our Region's Veterans: Assessing the Network of Services Available for Post 9/11 Veterans and Their Families in Northern Virginia

Just across the river from our nation's capital, NOVA is home to countless icons representing the history of warfare in the United States and the sacrifices that have been made for our freedoms. From Arlington National Cemetery, to the Marine Corps War Memorial, to the United States Air Force Memorial, to the 9/11 Pentagon Memorial, to the Pentagon itself, these landmarks draw millions of visitors each year and provide places for Americans to publicly mourn, celebrate, and remember our service men and women. Less public, however, are the thousands of veterans and their families living in NOVA and the Washington, D.C. metropolitan area who are restarting their civilian lives after serving multiple tours in Iraq and Afghanistan. According to the US Census Bureau's American Community Survey (ACS), NOVA is home more 35,000 that have served since 2001. Indeed, Virginia has the highest Operation Iraqi Freedom/Operation Enduring Freedom (OIF/OEF) veteran ratio of all 50 states.Dozens of local organizations have risen to the challenge of supporting NOVA's post-9/11 veterans. These organizations deliver a range of interventions from financial counseling, to job training, to mental health services. It is clear that a wide array of support is available. What is less clear is exactly what those needs are and how local organizations are working collectively to address them. In an effort to better understand this landscape, the Community Foundation -- in partnership with the United Way of the National Capital Area and with the support of Deloitte -- developed this report to gain a more in-depth understanding of NOVA's veteran support landscape. This report is intended to provide the Community Foundation and other local community-based organizations with the insights needed to strategically target and coordinate grant dollars toward the greatest needs 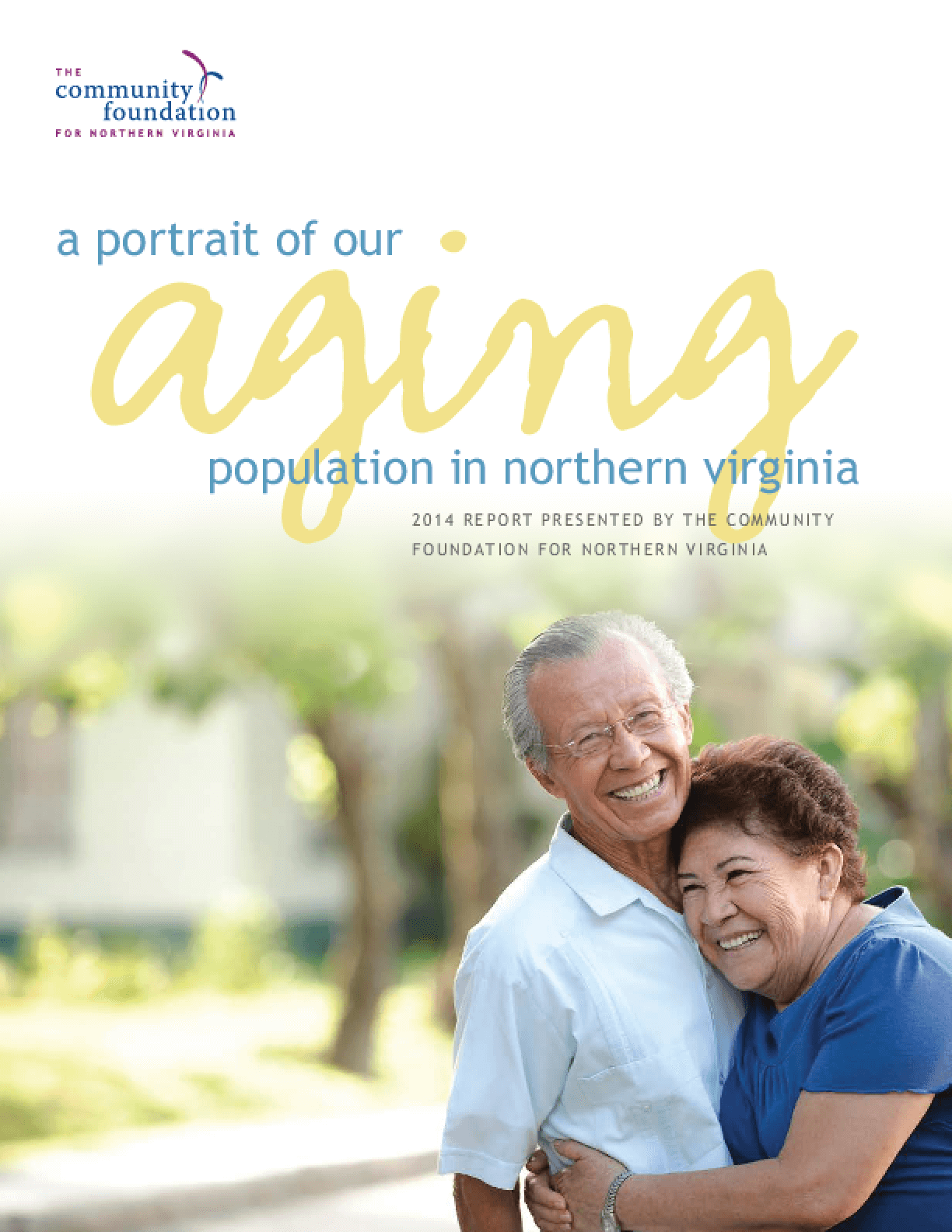 A Portrait of Our Aging Population in Northern Virginia

The older population of northern Virginia, those age 65 or more, is more economically stable, better educated and more diverse than the older population in the united states and virginia. Currently the region's population is also younger and healthier, skewed toward the younger end -- those 65 to 74 years of age. but in northern Virginia, as in the rest of the nation, a significant population shift is occurring. The portion of the population 65 years of age and older will increase steadily over the next two decades. This change, coupled with increased longevity will result in significant growth in older populations nationally, statewide and locally. The research for this report was commissioned by the Community Foundation and performed by Dean Montgomery of the Health Systems Agency of northern Virginia. it examines the implications of population aging in northern virginia. it focuses on recent and projected growth of the region's older population, those who are 65 years of age and older. demographic, economic, social and health data and indices are examined to develop a profile of the region's elderly and to identify the circumstances and conditions that affect their well-being. 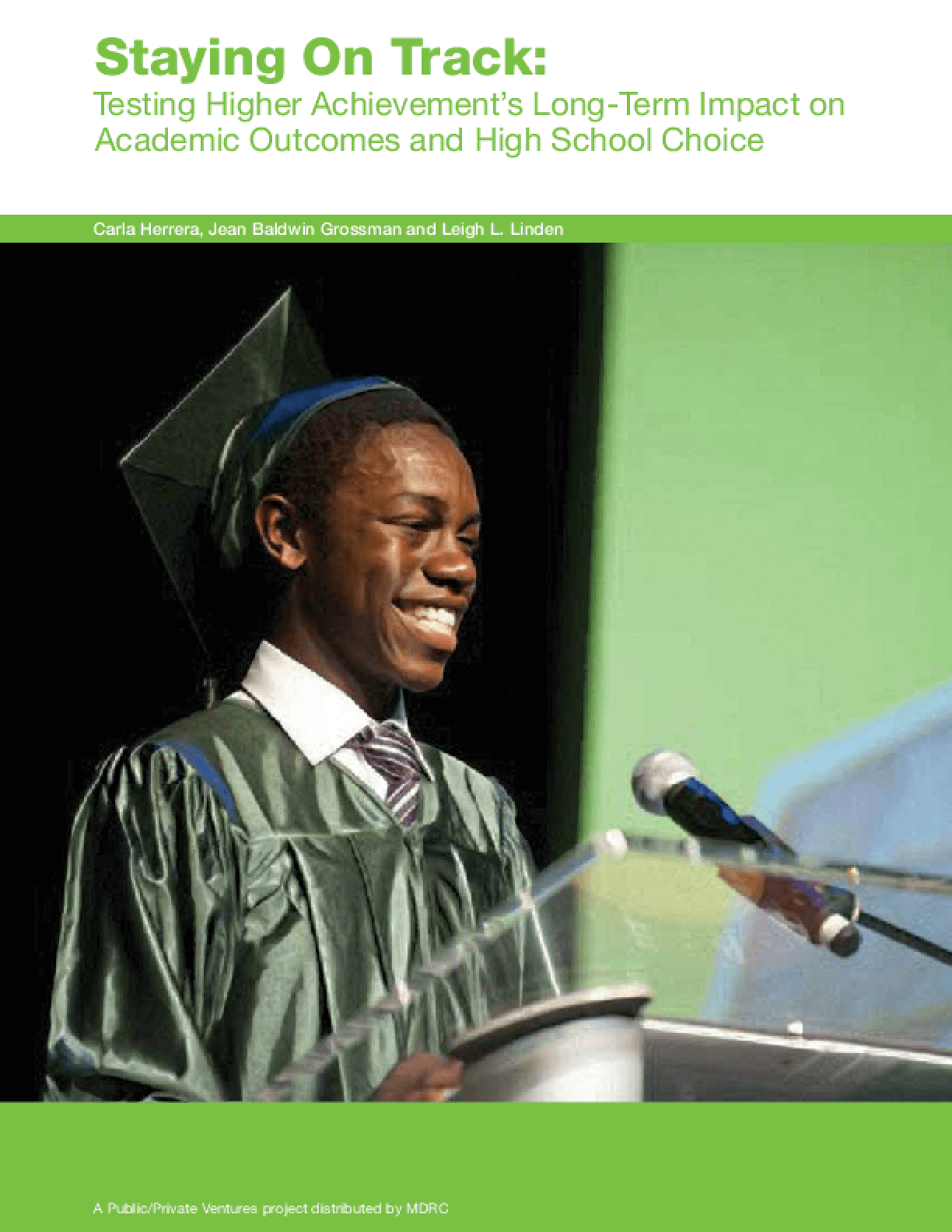 Higher Achievement is an intensive summer and after-school program that began in its current form in 1999 in Washington, DC. Today there are Higher Achievement programs in Washington, DC/Alexandria, VA; Richmond, VA; Pittsburgh, PA; and Baltimore, MD. The study includes the five Higher Education Achievement Centers that were operating in DC and Alexandria when the study began. Each center serves about 85 students, or "scholars", recruited mainly through school referral. Starting the summer before youth enter fifth or sixth grade and extending through eighth grade. Higher Achievement provides scholars with up to 650 hours of academic instructio0n per year, as well as enrichment activities and targeted, academic mentoring. 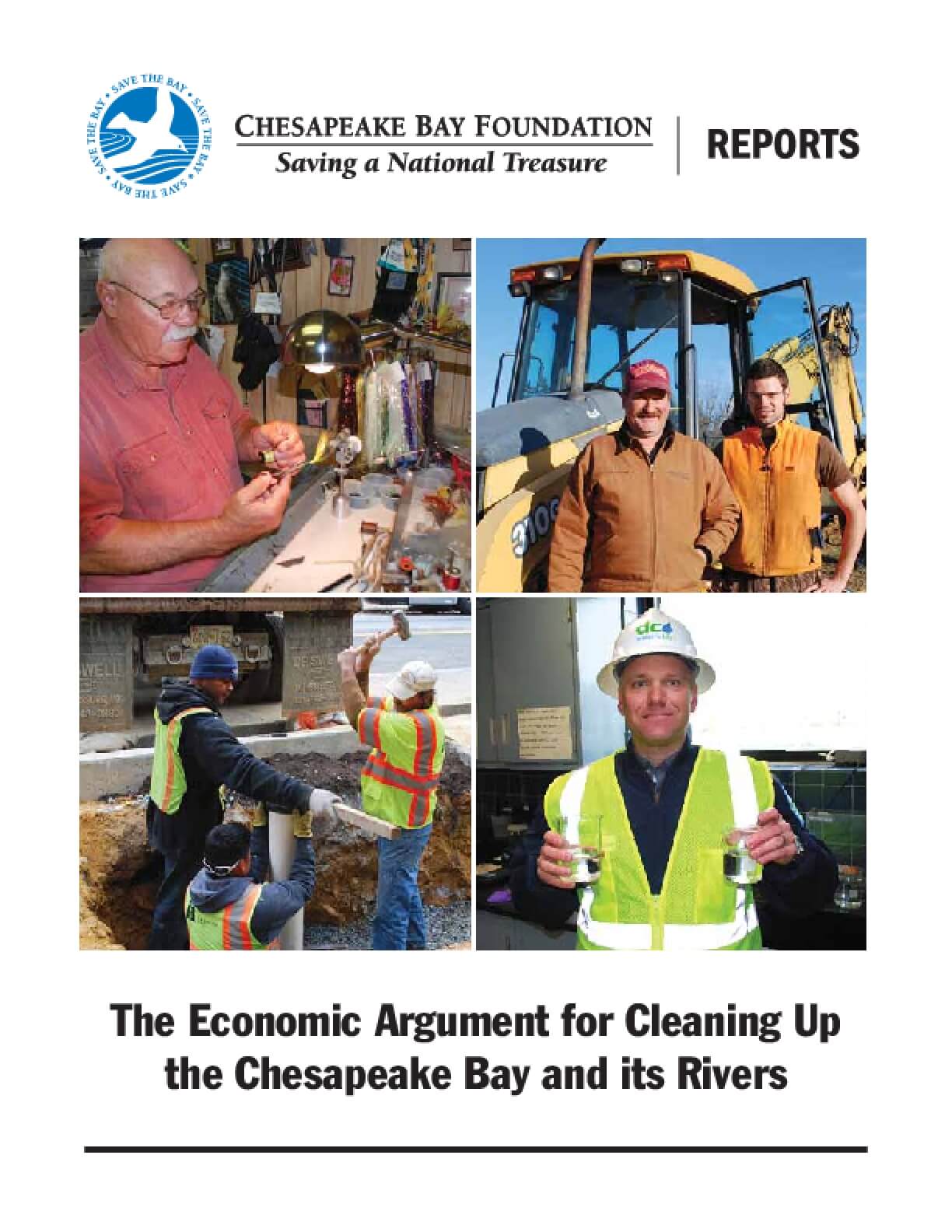 Failure to "Save the Bay" threatens the Bay's value as an economic driver. Conversely, investing in clean-water technology creates jobs, generates economic activity, and saves money in the long run. Hence, the protection and restoration of the Chesapeake is essential for a healthy and vibrant regional economy. This CBF report takes a close look at the relationship between clean water and the Bay region's local economies. 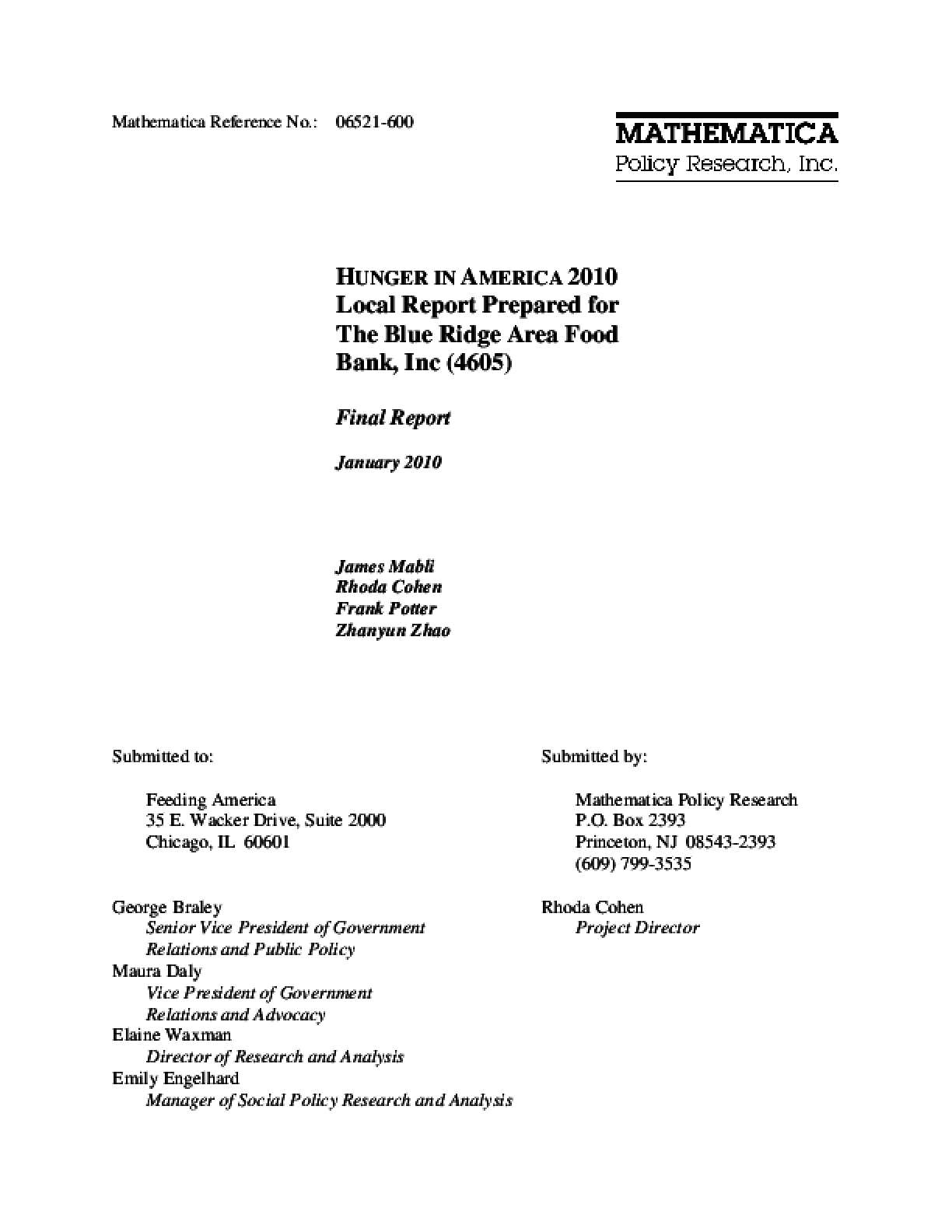