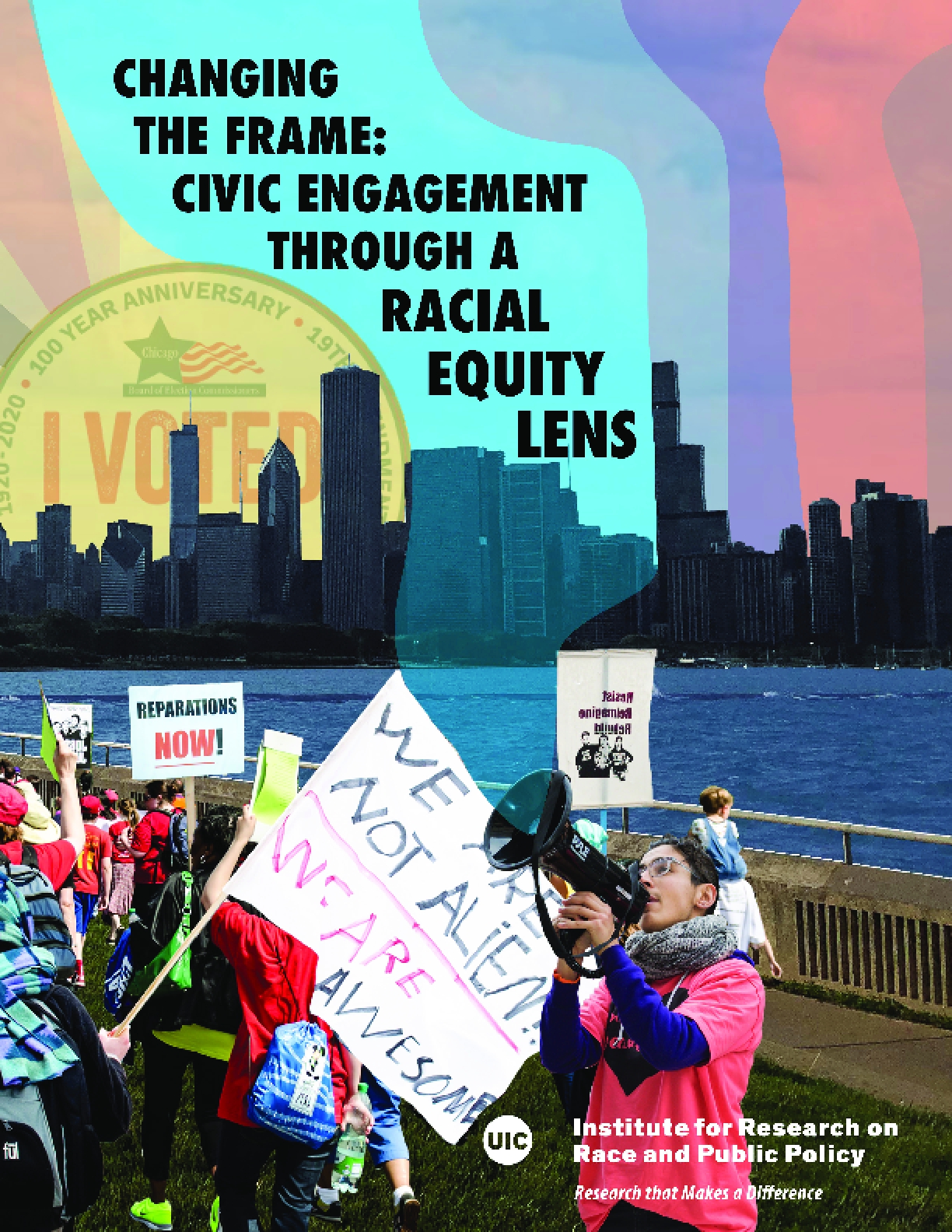 Changing the Frame: Civic Engagement Through a Racial Equity Lens

This report challenges past narratives suggesting Chicago's civic life is precarious and offers a broader analysis of civic life using a racial equity lens. According to the analysis, race and class differences in civic engagement disappear or reverse when including a wide range of less formal activities and forms of collective organizing practiced among Black, Latinx, and working-class people in Chicago.Since the 1960s, traditional measures of civic engagement have shown declining rates of civic health. These accounts of civic decline often focus exclusively on voting and donating one's time, talent, and income to traditional nonprofit organizations. This report provides new ways to assess civic life in Chicago, including participation in social movements like the immigrant rights movement, the growth in the number of nonprofits established, and social cohesion as captured through the hosting of block parties.Through interviews and analysis of nonprofits in Chicago, the report captures the perspective of organizers, academics, and funders who provide their unique perspectives on the state of civic engagement in Chicago. By framing civic engagement through a racial equity lens, the report provides a broader view of civic participation that can be used to catalyze and drive action. 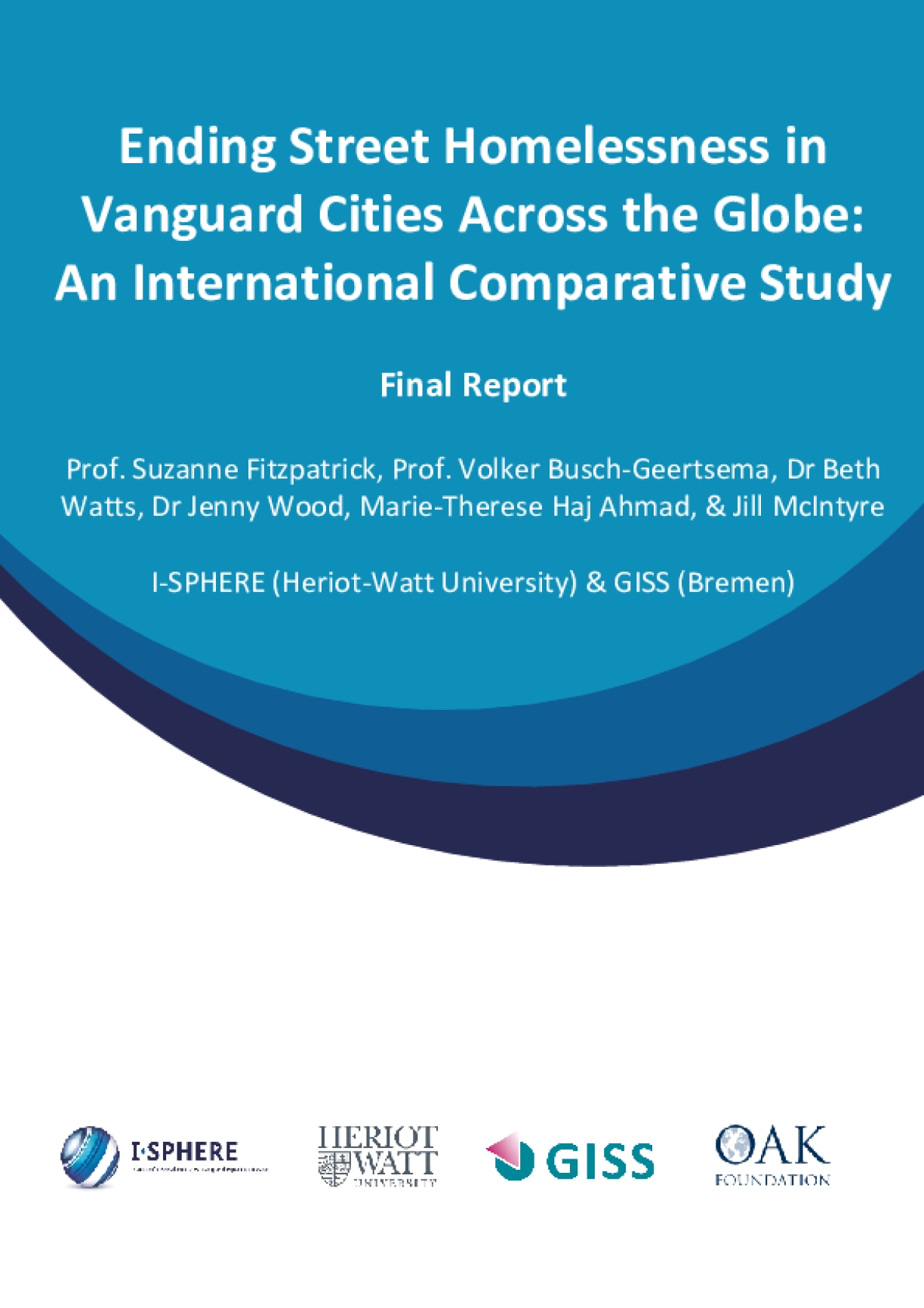 Ending Street Homelessness in Vanguard Cities Across the Globe: An International Comparative Study

Street homelessness is one of the most extreme, and visible, manifestations of profound injustice on the planet, but often struggles to achieve priority attention at international level. The Institute of Global Homelessness (IGH's) A Place to Call Home initiative, launched in 2017, represented a concerted effort to support cities across the globe to eradicate street homelessness. A first cohort of 13 'Vanguard Cities' committed to a specific target on ending or reducing street homelessness by December 2020. Our independent evaluation of this initiative found that:Two Vanguard Cities – Glasgow and Sydney – fully met their self-defined target reductions for end 2020. In addition, Greater Manchester, while it did not meet its exceptionally ambitious goal of 'ending all rough sleeping', recorded an impressive 52% reduction against baseline.Overall, there was evidence of reductions in targeted aspects of street homelessness in over half of the Vanguard Cities. In most of the remaining cities data limitations, sometimes as a result of COVID, meant that it was not possible to determine trends. In only one Vanguard City – Edmonton – was there an evidenced increase in street homelessness over baseline levels.Key enablers of progress in reducing street homelessness included the presence of a lead coordinating agency, and coordinated entry to homelessness services, alongside investment in specialized and evidence-based interventions, such as assertive street outreach services, individual case management and Housing First.Key barriers to progress included heavy reliance on undignified and sometimes unsafe communal shelters, a preoccupation with meeting immediate physiological needs, and sometimes perceived spiritual needs, rather than structural and system change, and a lack of emphasis on prevention. Aggressive enforcement interventions by police and city authorities, and documentary and identification barriers, were also counter-productive to attempts to reduce street homelessness.A key contextual variable between the Vanguard Cities was political will, with success in driving down street homelessness associated with high-level political commitments. An absolute lack of funds was a major challenge in all of the Global South cities, but also in resource-poor settings in the Global North. Almost all Vanguard Cities cited pressures on the affordable housing stock as a key barrier to progress, but local lettings and other policies could make a real difference.The impact of the COVID-19 crisis differed markedly across the Vanguard Cities, with people at risk of street homelessness most effectively protected in the UK and Australian cities. Responses were less inclusive and ambitious in the North American and Global South cities, with more continued use of 'shared air' shelters, albeit that in some of these contexts the pandemic prompted better coordination of local efforts to address street homelessness.IGH involvement was viewed as instrumental in enhancing the local profile, momentum and level of ambition attached to reducing street homelessness in the Vanguard Cities. IGH's added value to future cohorts of cities could be maximised via a focus on more tailored forms of support specific to the needs of each city, and also to different types of stakeholders, particularly frontline workers. 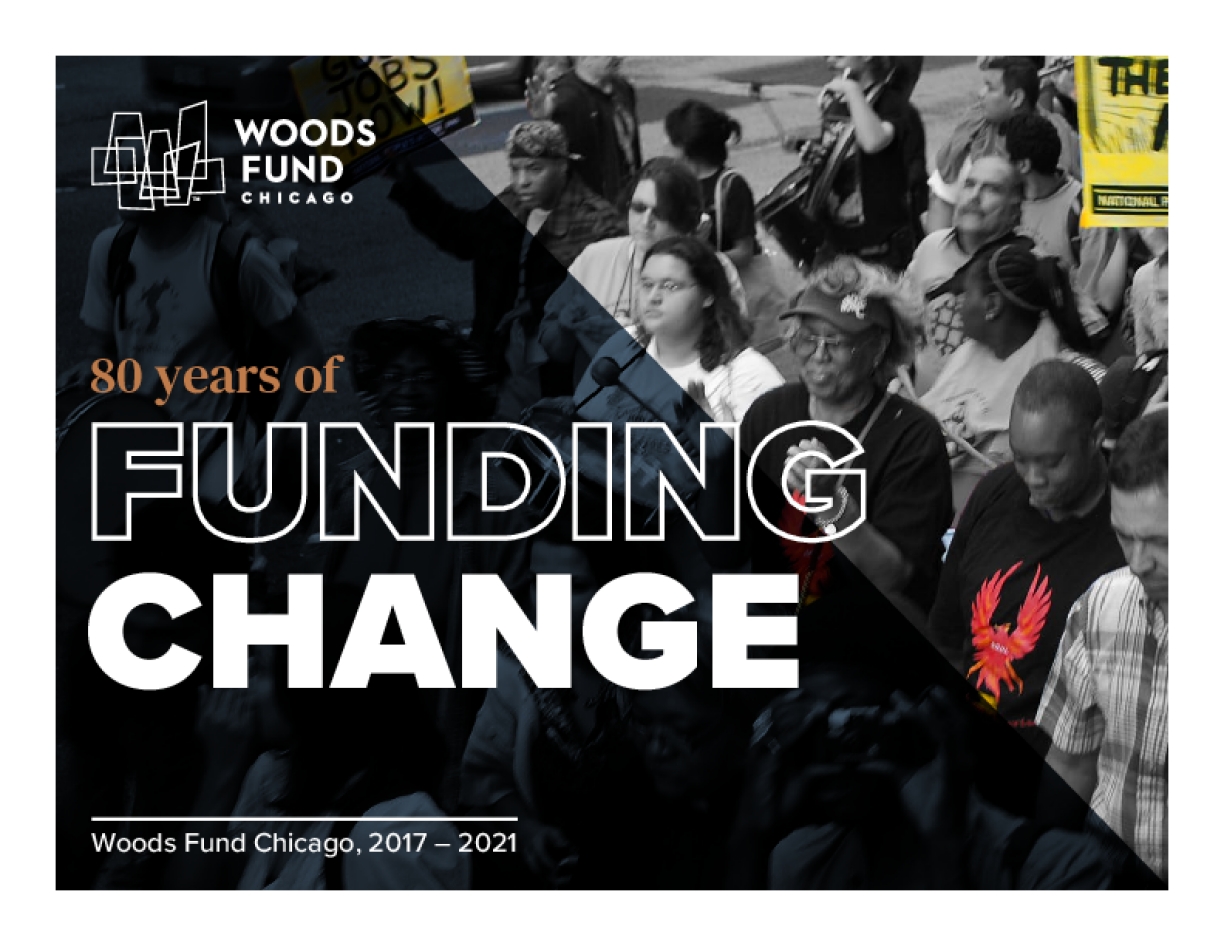 Woods Fund Chicago seeks to support and promote community organizing and public policy advocacy that advances racial equity and economic justice. We firmly believe that the people most impacted by structural racism and economic injustice should lead the process of defining problems and developing solutions for their communities in the Chicago metropolitan area. Woods Fund has identified racial equity as a priority for the foundation, and works to continually hone an approach to grantmaking that reflects that commitment. 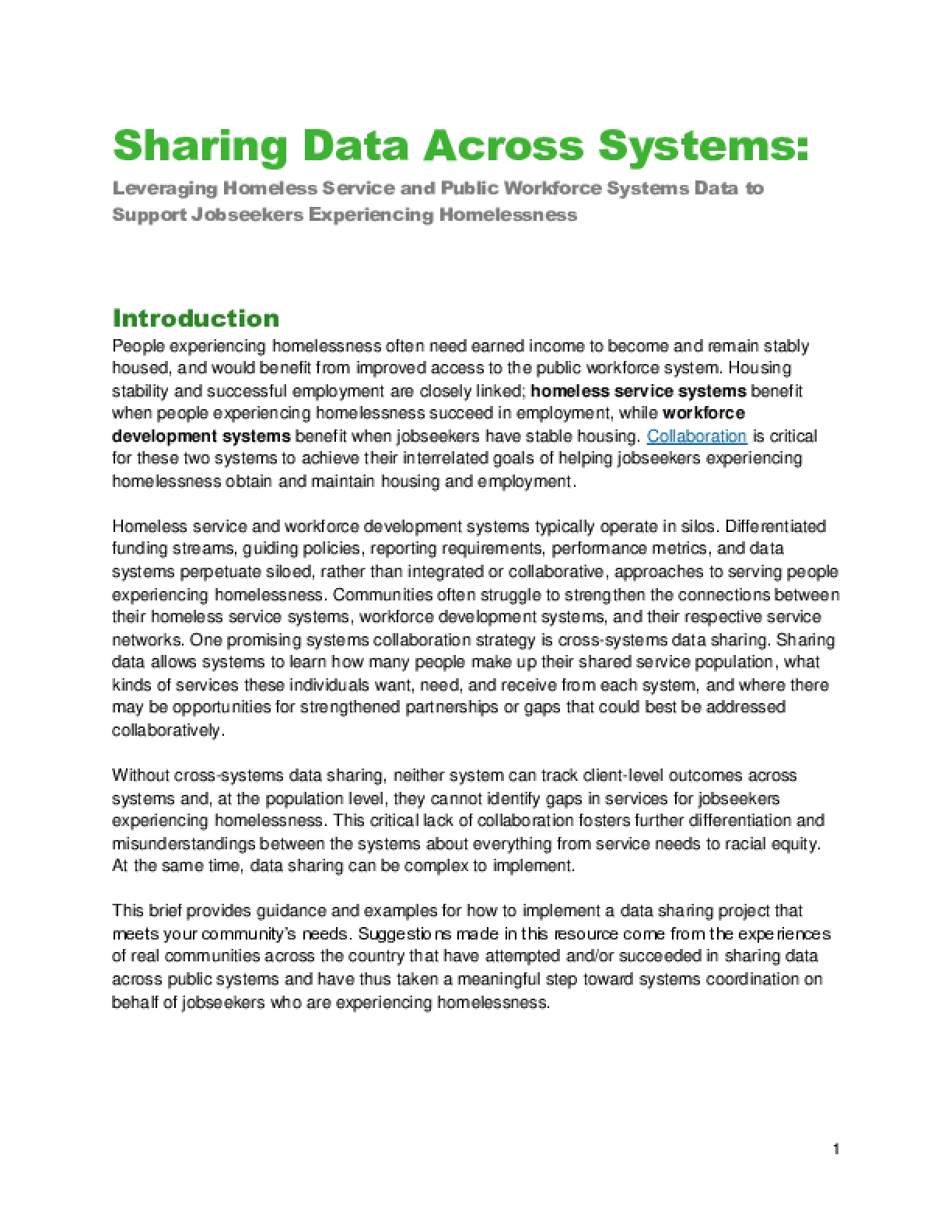 Employment success and housing stability go hand in hand. Although the public workforce and homeless service systems both serve homeless and unstably housed jobseekers, these systems work in silos in many communities. Collaboration is critical for these two systems to achieve their interrelated goals.One promising systems collaboration strategy is cross-system data sharing. This resource provides an overview of data sharing, explains how it can be used to better understand and meet the needs of workforce and homeless service populations in your community, and lifts up how Chicago and Detroit have successfully operationalized this strategy. 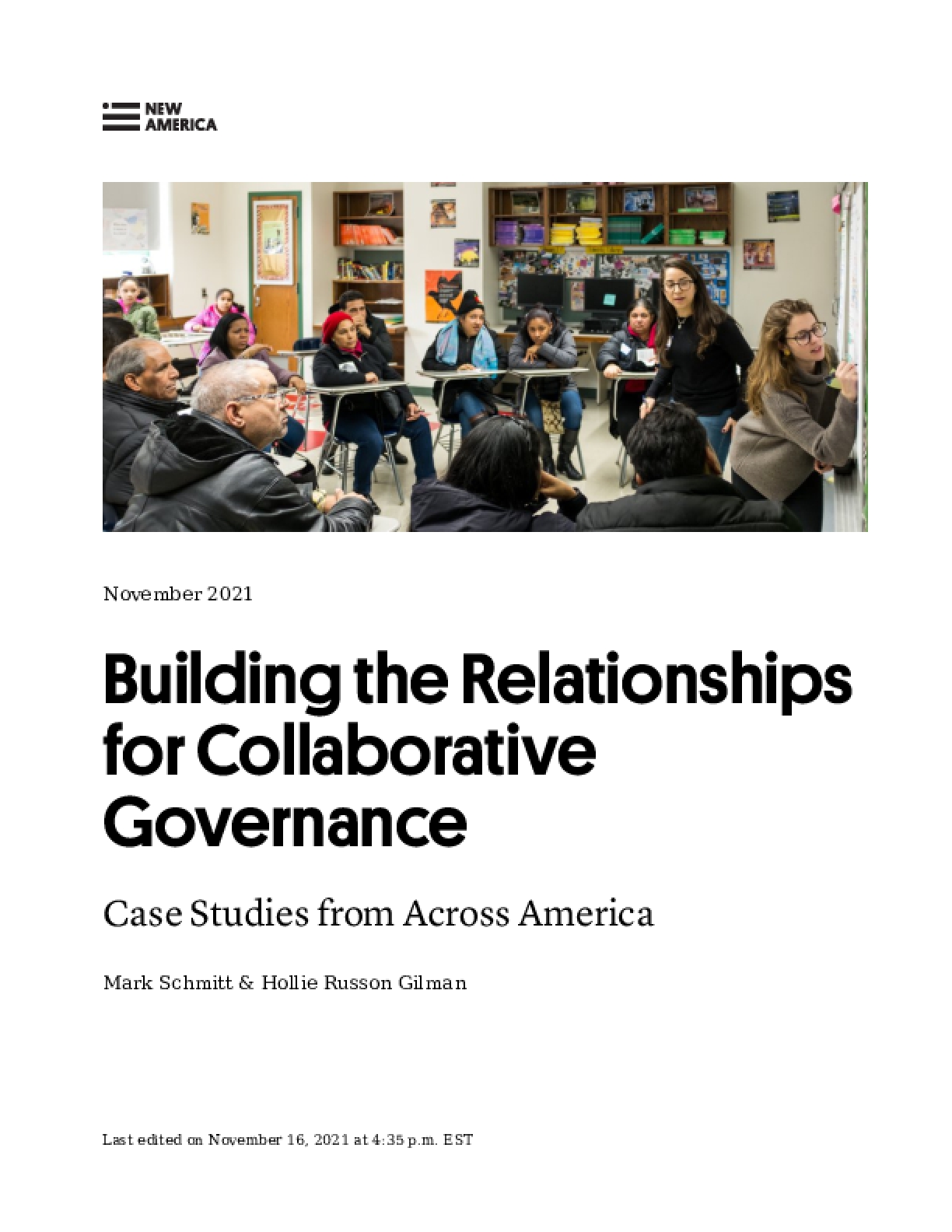 Building the Relationships for Collaborative Governance: Case Studies from Across America

In recent years, a more collaborative form of democratic engagement has emerged, primarily at the local and state level, as well as internationally. Collaborative governance, or co-governance, refers to a broad range of models of civic engagement that allow people outside and inside government to work together in designing policy. This new form of engagement seeks to break down the boundaries between advocates and officials and is not only more democratic, but also more inclusive and open to those served by the government. How are co-governance relationships best developed, sustained, and supported? The clearest way to answer this question is not in theory, but from the learned experiences of co-governance, at the neighborhood, city, and state level. In this report, we highlight five of these cases in communities across the country where progress has been made to improve the quality of life and strengthen the bonds of community for all through the collaborative work of democracy. 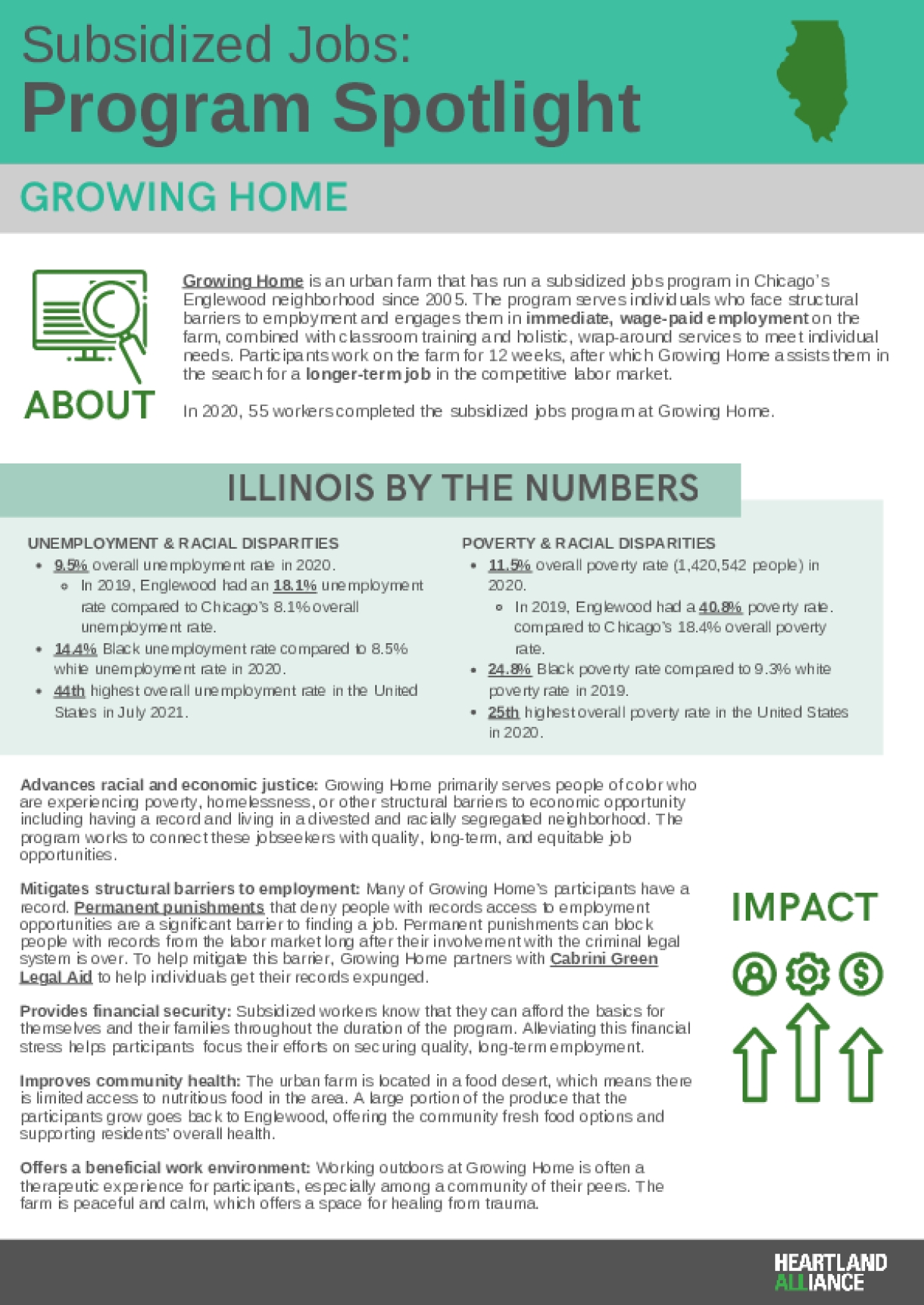 Growing Home is an urban farm that has run a subsidized jobs program in Chicago's Englewood neighborhood since 2005. The program serves individuals who face structural barriers to employment and engages them in immediate, wage-paid employment on the farm. This program spotlight discusses Growing Home's subsidized jobs model and its impact and calls for federal investments in subsidized jobs to support jobseekers facing structural barriers to employment. Growing Home is located in the 1st Congressional district of Illinois. The representative for this district is Bobby L. Rush (D). 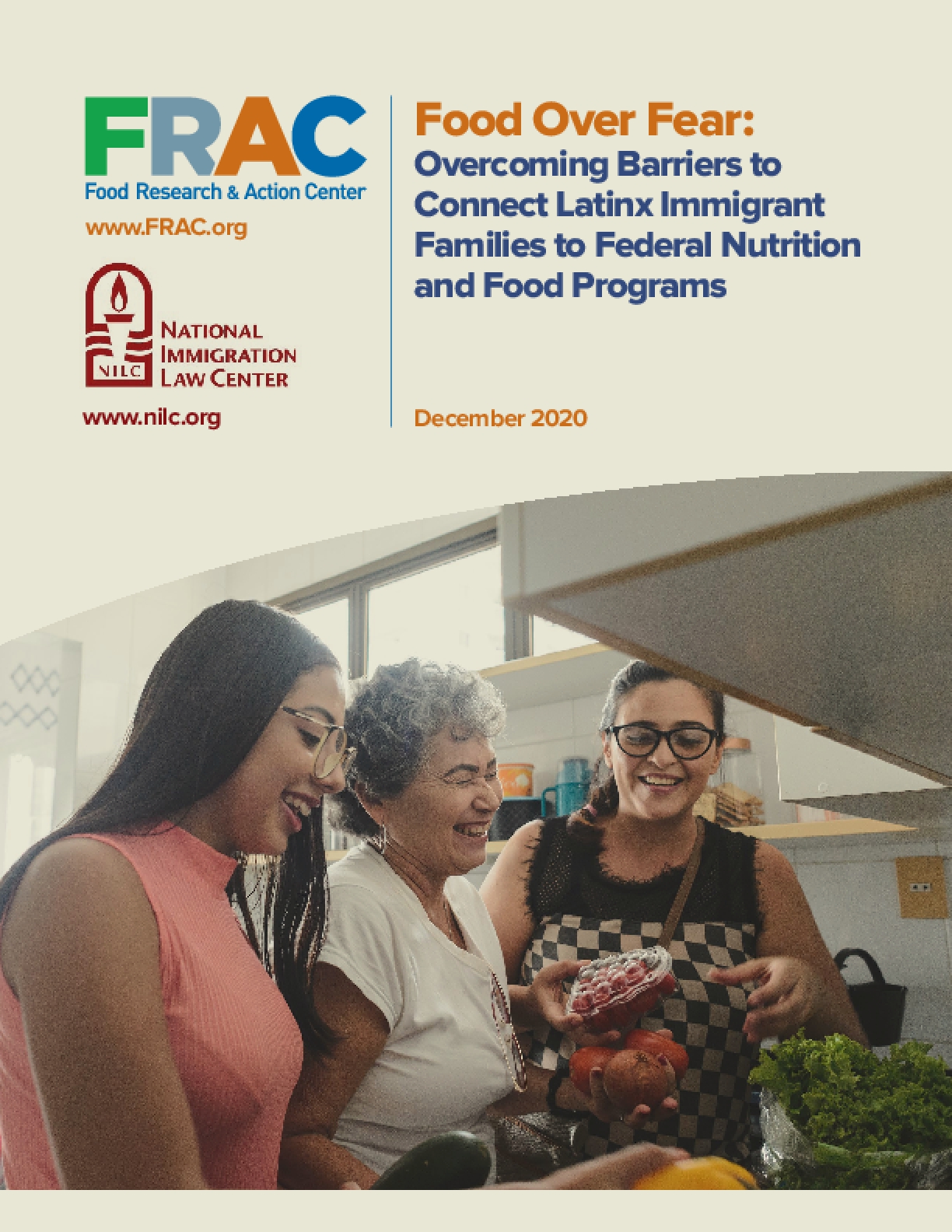 This report sheds light on why many immigrant families are forgoing vital assistance from federal nutrition and food programs and lifts up recommendations aimed at ensuring that all families and individuals, regardless of immigration status, are nourished and healthy.While the findings of this report are informed by a series of focus groups conducted from November 2019 to January 2020 (prior to the onset of COVID-19), the need to connect immigrant families to nutrition programs is arguably of even greater importance given how COVID-19 is fueling unprecedented food insecurity and ravaging communities of color and immigrant communities at disproportionately high rates due to unique barriers faced by families that include noncitizens. 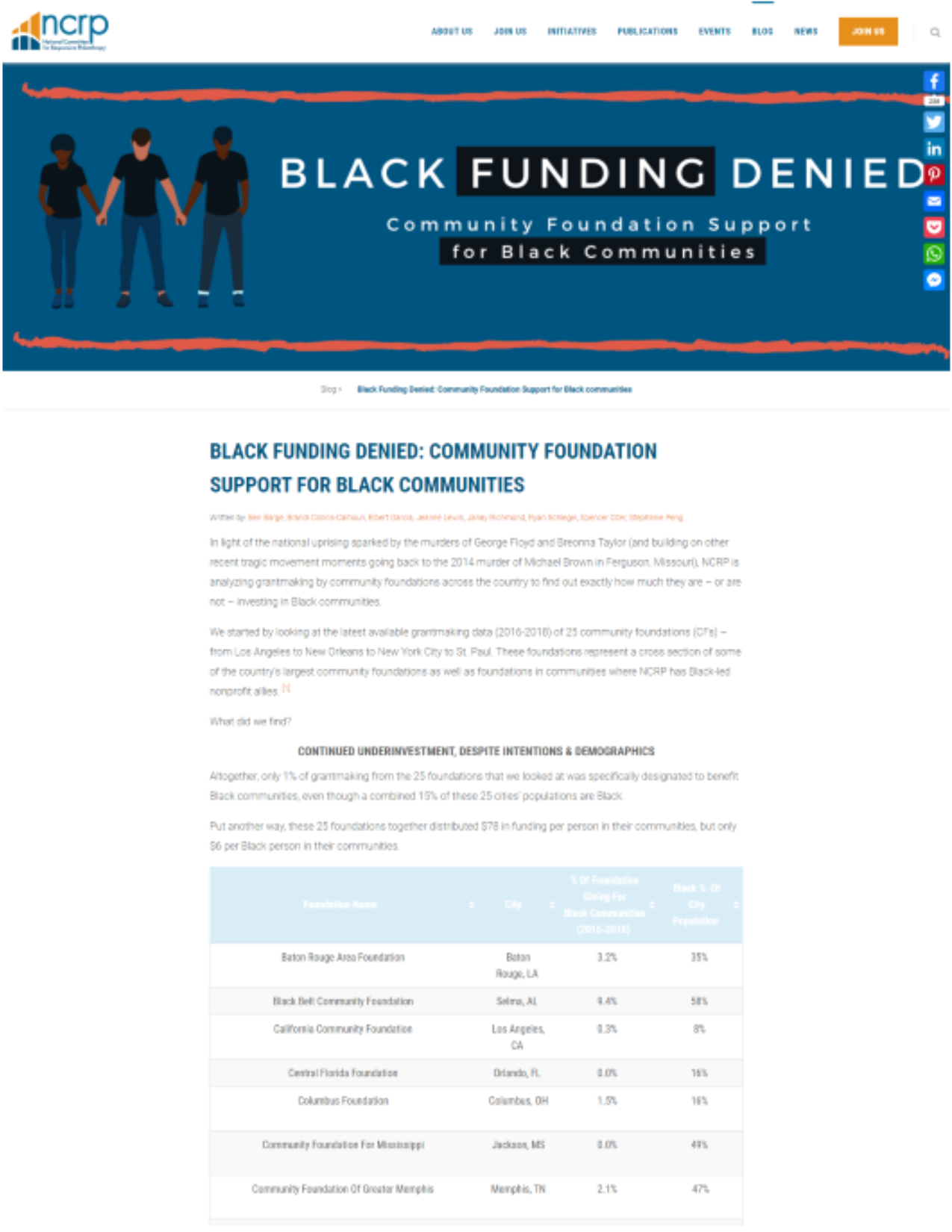 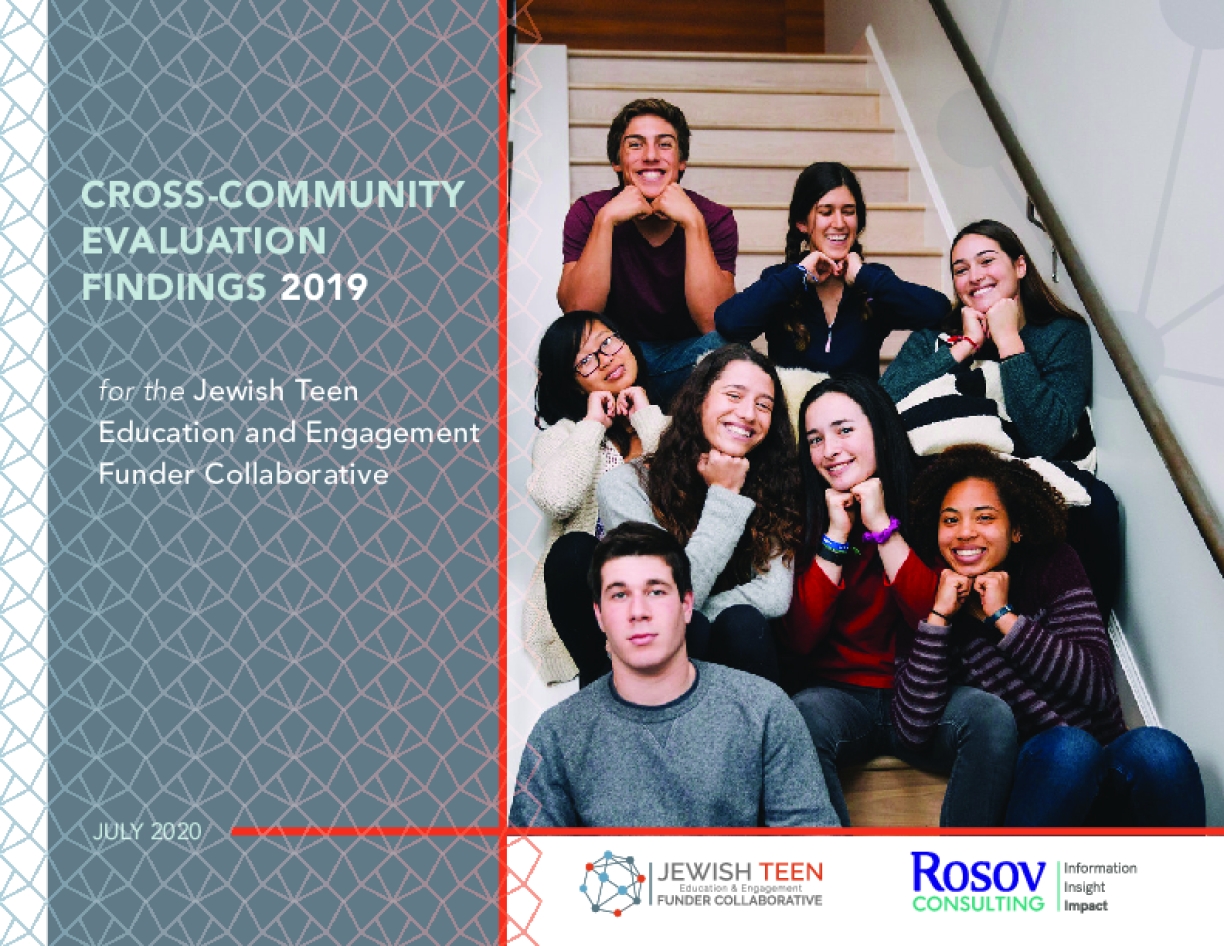 Four years into this collective effort to aggregate and analyze data of communities in the Jewish Teen Education and Engagement Funder Collaborative, we are beginning to yield some findings that are consistent year-over-year—and actionable. This report presents the findings of evaluation work completed during the 2018–2019 program year and homes in on those findings most ripe for appreciation and action.There is a strong correlation between teens' connection to Jewish values and and the influence those values have on the livesteens choose to lead. Substantive Jewish content creates a sense of belonging, a desire to do good in the world, and a platformfor teens to build friendships—these peer relationships also contribute to strong Jewish outcomes overall. Importantly, the report concludes with recommendations applicable beyond the 10 community-based teen initiatives, informing any organization committed to effective teen programs, professional development for youth professionals, and affordability of programs for parents.The report draws from a variety of sources to offer a snapshot of a moment in time, and evaluation alone cannot provide the full picture of tectonic shifts occurring on the ground in these 10 communities. Extremely complex efforts involving stakeholders, implementers, and the communities are making lasting and positive changes to the culture impacting teen engagement.We encourage you to read the complementary case studies documenting the work, along with previous reports, all found onthe Learnings page of TeenFunderCollaborative.com. 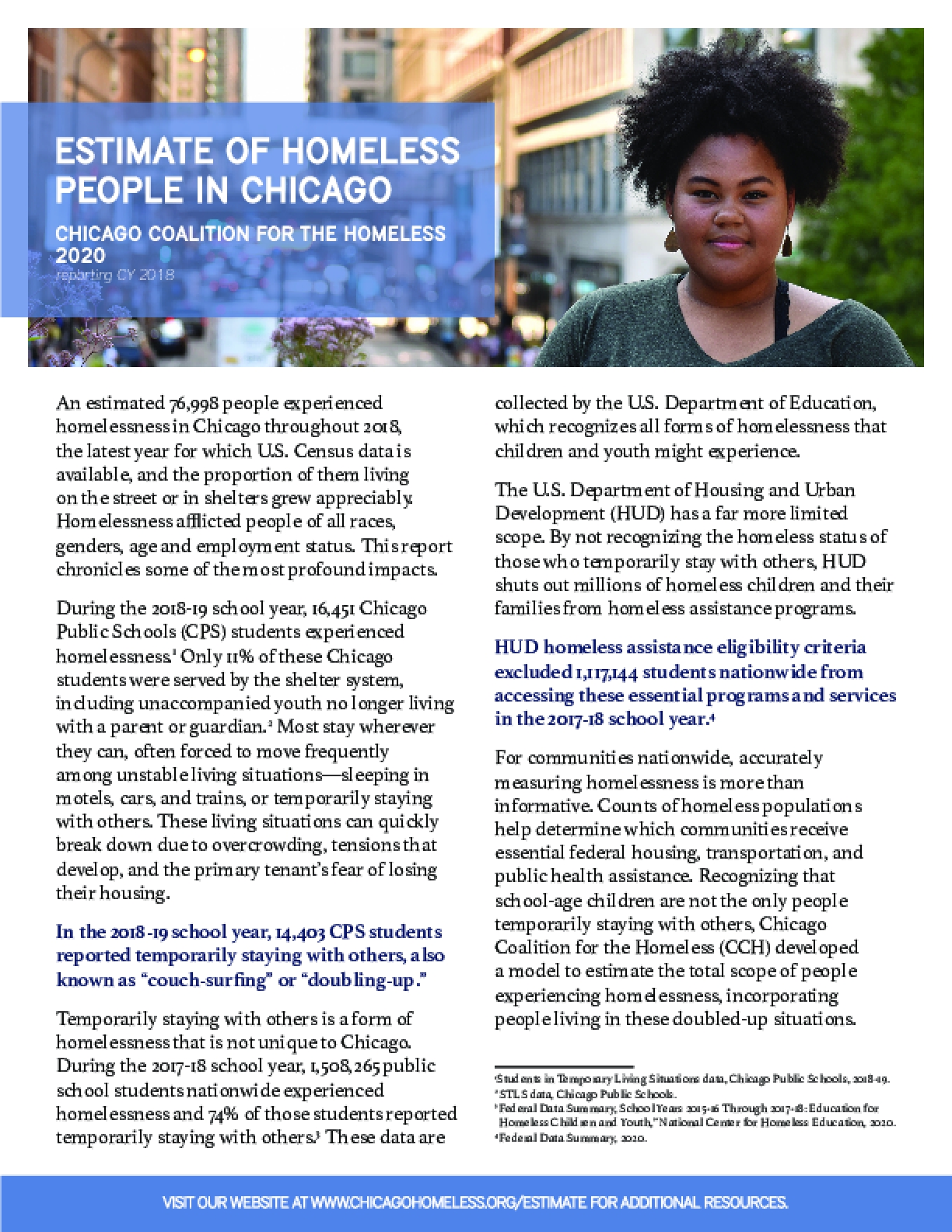 Estimate of Homeless People in Chicago 2018

This report shows 76,998 Chicagoans experienced homelessness in 2018, per an annual analysis by CCH that relies on the most current U.S. census data.Though the city's aggregate homelessness count decreased from the prior year, Chicago saw a nearly 2,000-person increase among those who lived on the street or in shelters. It is a development with troubling connotations today: The city's shelter system is a hotspot for COVID-19 infections and homelessness is expected to climb dramatically during the worsening economic downturn triggered by the pandemic.Per our analysis, the number who experienced homelessness decreased by 4,282 people, or 5.9% from 2017. This net decrease was concentrated exclusively among homeless people in temporary living situations, also known as living "doubled-up" or "couch-surfing." The number who doubled-up in 2018 remained massive, at 58,872 Chicagoans. 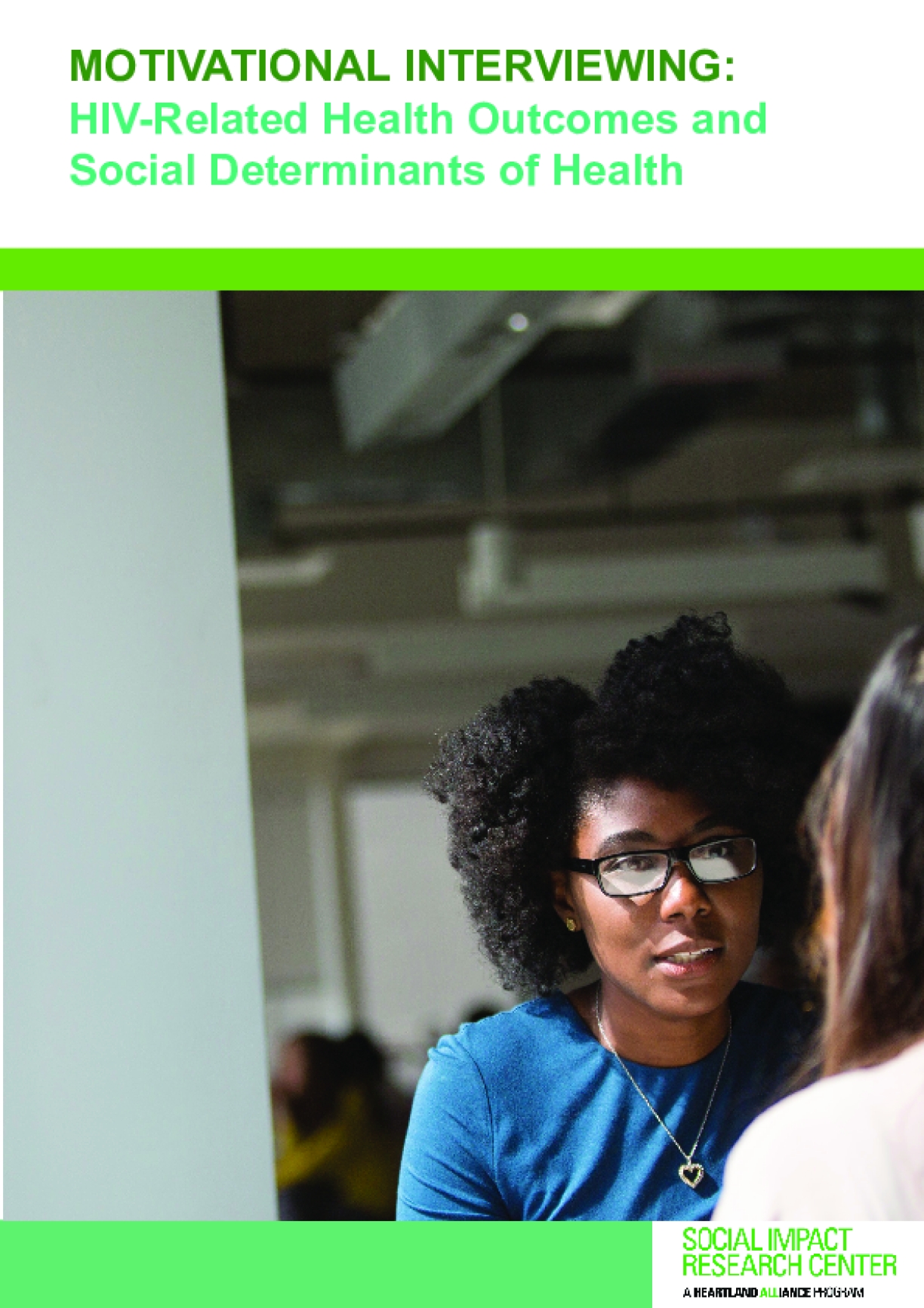 For individuals experiencing housing insecurity—and other hardships associated with poverty, such as low rates of health literacy, food insecurity, lack of transportation, and restricted access to quality health care—an HIV diagnosis exacerbates an already burdened quality of life. These larger structural barriers may inhibit HIV+ participants from feeling able to change individual-level behaviors which may complicate their HIV status. One counseling intervention that addresses obstacles to change is Motivational Interviewing (MI). MI is a collaborative, client centered approach that fosters communication between a service provider and their recipient with the goal of identifying and resolving the change goals identified during the counseling session. Studies on healthcare outcomes for chronically ill individuals who received MI interventions indicate that, when followed properly, MI can effect long-term, positive behavior changes. This paper defines MI, explores it's applications among HIV+ participants, describes an MI fidelity monitoring tool, and situates MI relevance while acknowledging the influence of social determinants of health. 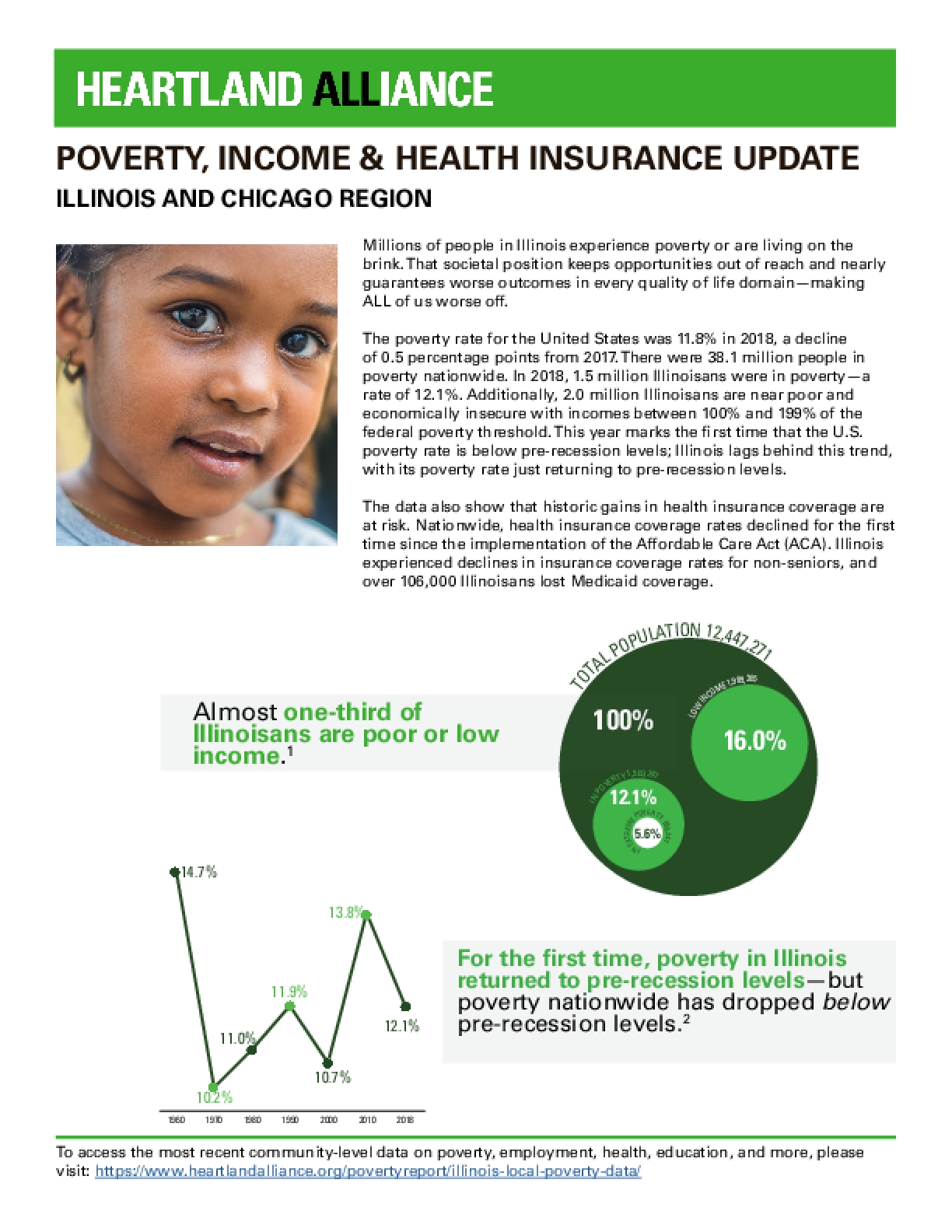 Millions of people in Illinois experience poverty or are living on the brink. That societal position keeps opportunities out of reach and nearly guarantees worse outcomes in every quality of life domain—making ALL of us worse off. The poverty rate for the United States was 11.8% in 2018, a decline of 0.5 percentage points from 2017. There were 38.1 million people in poverty nationwide. In 2018, 1.5 million Illinoisans were in poverty—a rate of 12.1%. Additionally, 2.0 million Illinoisans are near poor and economically insecure with incomes between 100% and 199% of the federal poverty threshold. This year marks the first time that the U.S.poverty rate is below pre-recession levels; Illinois lags behind this trend,with its poverty rate just returning to pre-recession levels.