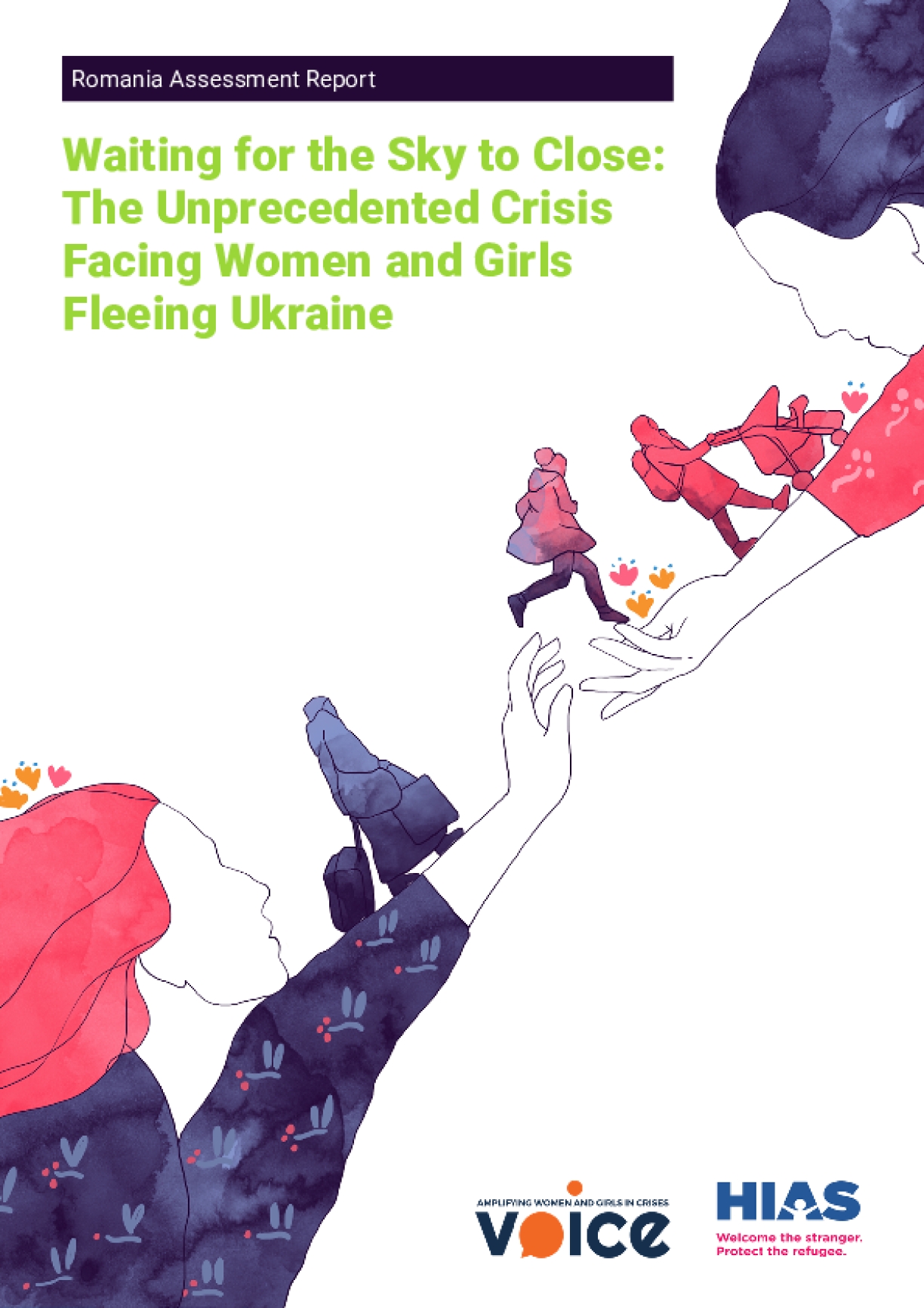 The global humanitarian community is failing to meet the needs of women and girls displaced by the Russian invasion of Ukraine and adequately support women- and girl-led organizations on the frontlines of the emergency response, according to a new, seven-part regional assessment from VOICE, in partnership with HIAS.The reports were developed by VOICE's 10-member assessment team, who spent four weeks speaking to women's rights organizations, frontline workers, local NGOs, government workers, United Nations agency actors, and internally displaced and refugee populations in Hungary, Moldova, Poland, Romania, and Slovakia. VOICE also conducted virtual interviews with women's rights groups and other local organizations in Ukraine.The reports paint a vivid picture of the challenges faced by women and girls who have been displaced by Russia's invasion of Ukraine, as well as the need to ensure that women's rights organizations and other local actors are integrated into response design and leadership from the beginning. 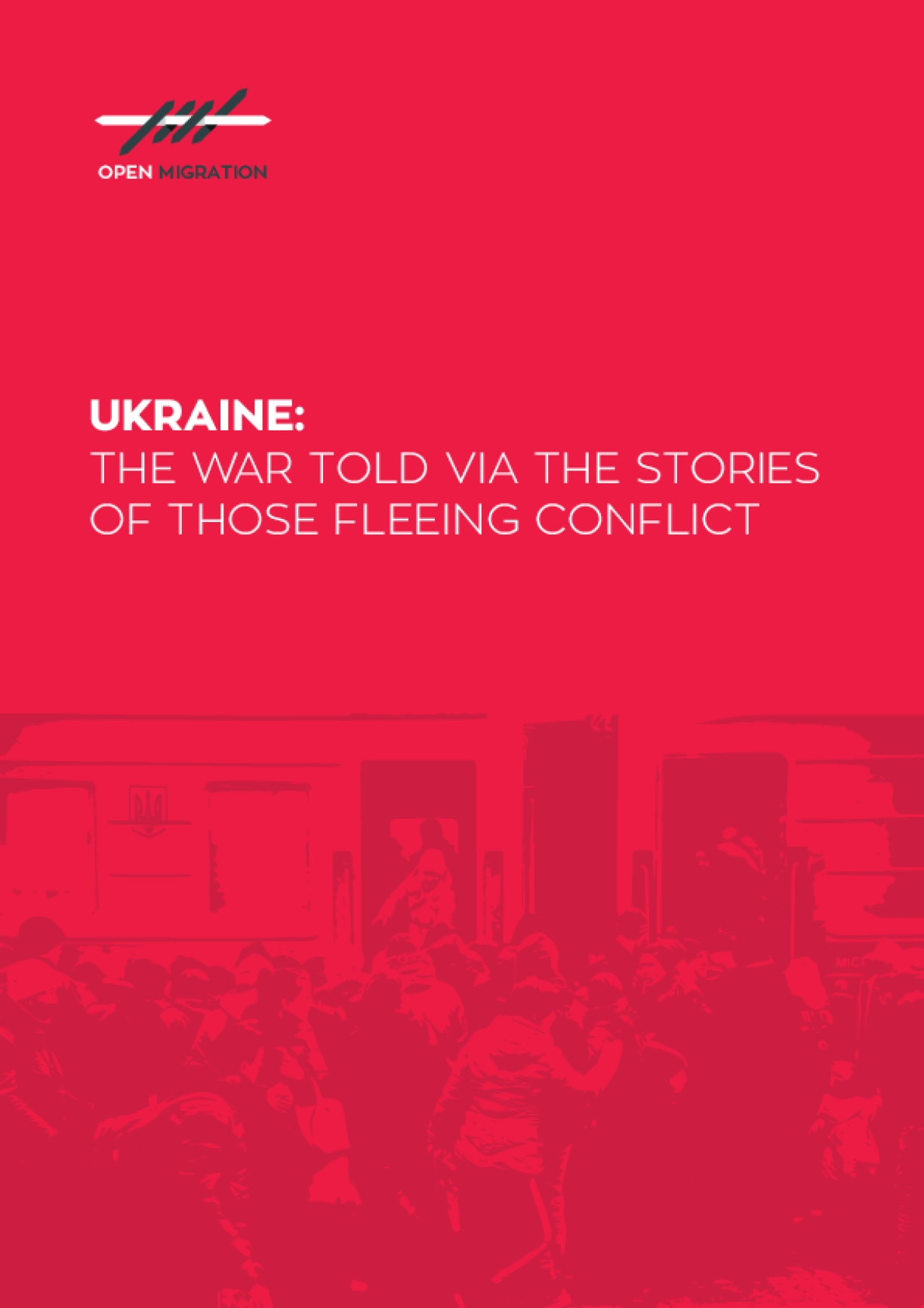 Ukraine: The War Told Via the Stories of Those Fleeing Conflict

We have decided to create a collection of stories in this e-book, to offer a broad picture of what is happening, what the war means, and the reasons that in Ukraine, as in other parts of the world, push people to run from their nation homes. We also reflect on how much the "willingness to welcome" counts. Our aim is to attentively follow the facts today and build a shared memory for tomorrow that helps us avoid mistakes made in the past. 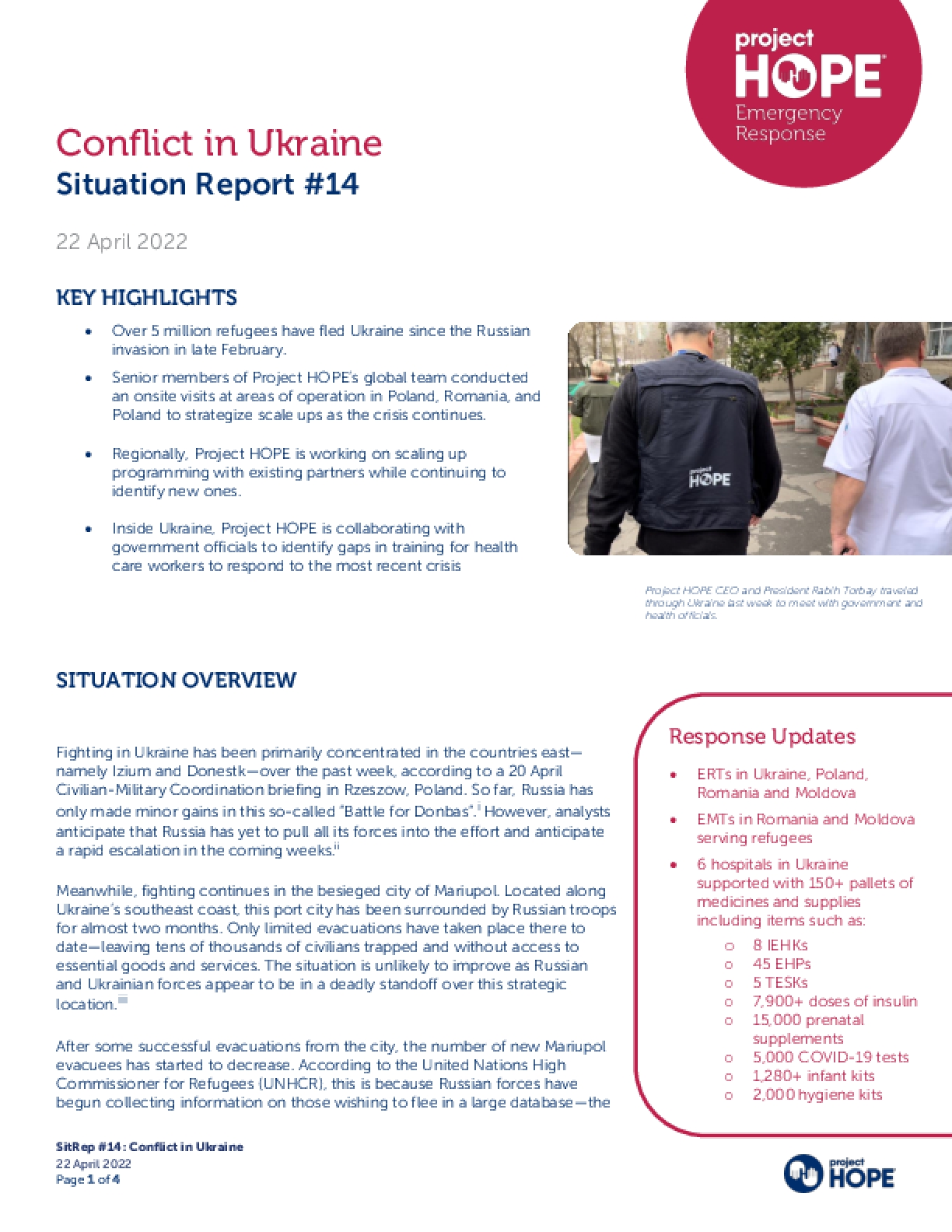 The conflict in Ukraine has now displaced 7.1 million Ukrainians to date. The most pressing needs among this population are cash and financial support, transportation, food, shelter, and hygiene items. Many are also in need of medicines and health services. The humanitarian conditions for those who remain in their homes are also severe: Over 1.4 million people are without running water in Eastern Ukraine and an additional 1.6 million across the country are in immediate risk of losing their access. Many others face significant protection, food, and health risks.Project HOPE's support to health facilities and IDPs in Ukraine continues to scale up in response to the overwhelming needs. We are establishing focus on three hubs of support in West Ukraine, East Ukraine, and the Kyiv area with potential expansion to Odessa and Kherson and other areas as security allows.We have also imported more than 150 pallets of medicine and medical supplies to date, including Interagency Emergency Health Kits (IEHKs), Essential Health Packs (EHPs), Trauma and Emergency Surgery Kits (TESKs), first aid kits, prenatal supplements, hygiene kits, and infant kits. These supplies have been delivered to hospitals across Lviv, Kyiv, Cherkasy, Poltova and Kharkiv.We are also establishing a trauma care training model to roll out to medical professionals on the front lines. 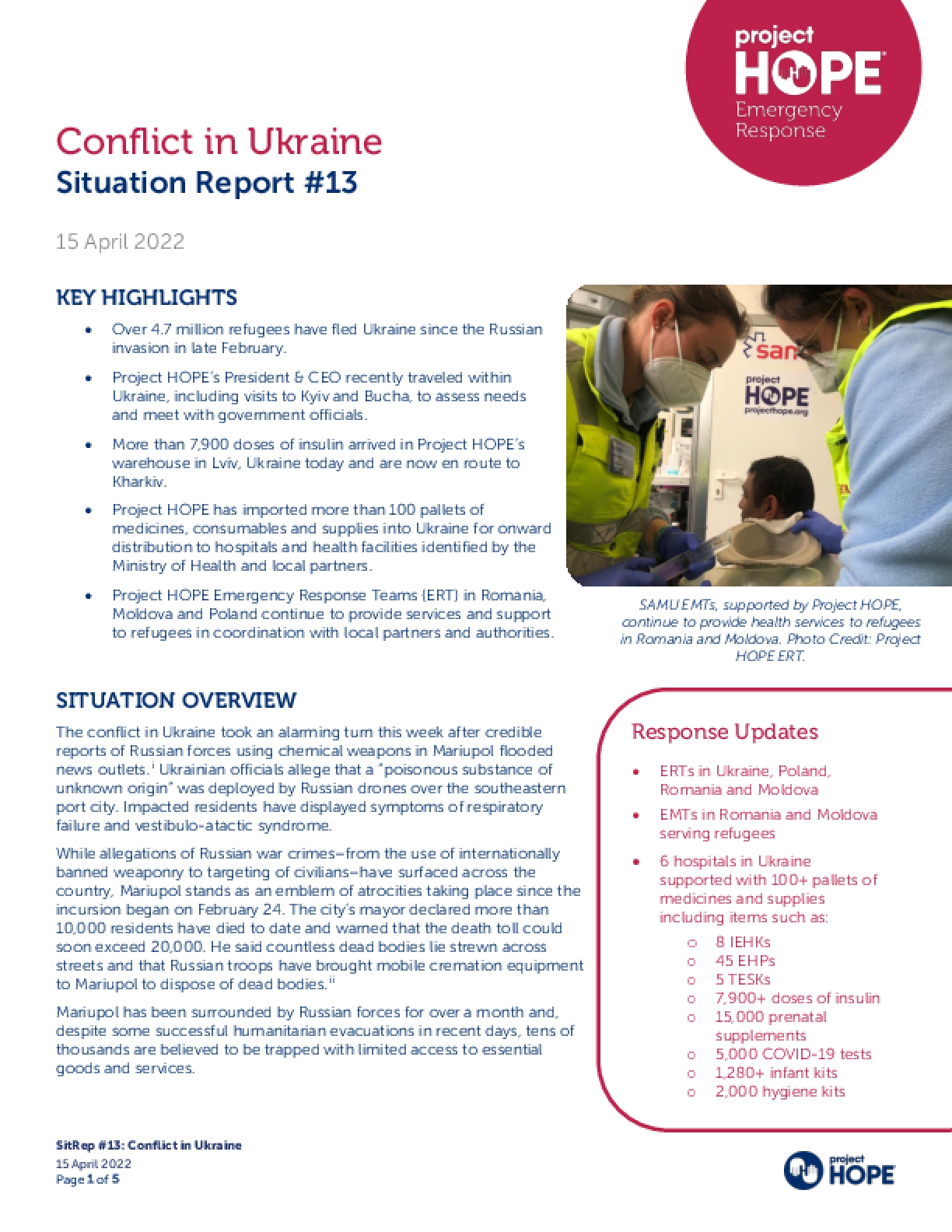 Project HOPE continues to scale up operations in Eastern Europe to respond to the ongoing humanitarian crisis. Our teams in Moldova, Poland, Romania, and Ukraine bring technical knowledge on health, mental health, protection, and other sectors with considerable field experience, and a strong relationship with local and international actors to forge a targeted and comprehensive response.This week, more than 7,900 doses of insulin reached Project HOPE's warehouse in Lviv and are now en route to Kharkiv. Project HOPE has imported more than 100 pallets of medicine and medical supplies to date, including Interagency Emergency Health Kits (IEHKs), Essential Health Packs (EHPs), Trauma and Emergency Surgery Kits (TESKs), first aid kits, prenatal supplements, hygiene kits, and infant kits. These supplies have been delivered to six hospitals across Lviv, Kyiv, Cherkasy, Poltova and Kharkiv.In Moldova, Project HOPE has procured more than 300 wheelchairs to be distributed to a local organization serving Ukrainian refugees. We also continue to support  SAMU's Emergency Medical Teams (EMTs) to serve refugees crossing the Ukraine/Moldova border as per the request of the WHO and Moldovan Ministry of Health. The most prevalent diagnoses have included hypertension, upper respiratory infections, and acute mental health issues. 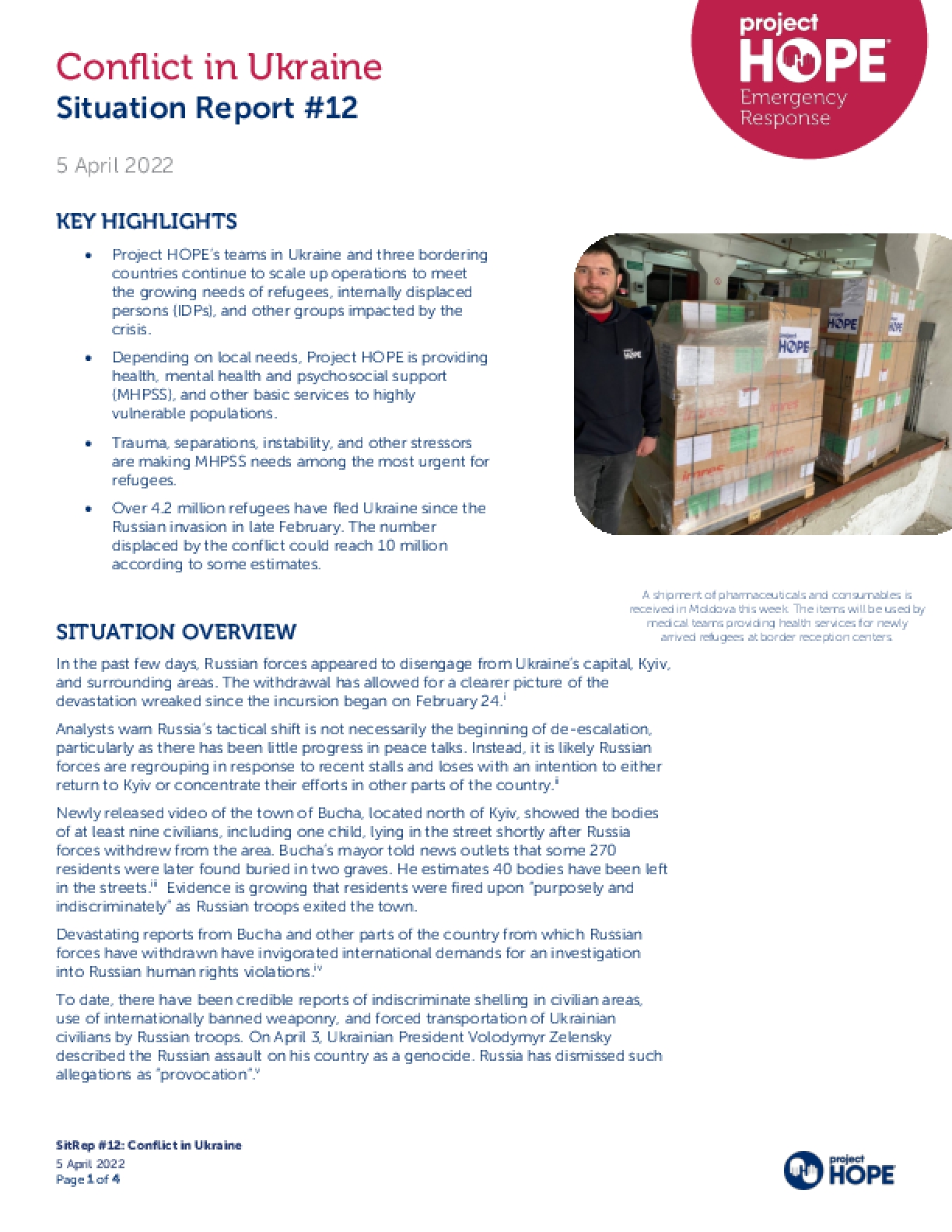 Project HOPE is partnering with a non-governmental organization in Ukraine to purchase and transport pharmaceuticals and medical supplies across the country. This coming week, Project HOPE is transporting 100 pallets of pharmaceuticals and supplies, including insulin, needles, sutures, and gauzes into Lviv for onward distribution into the country. Our team on the ground is also conducting assessments of health facilities to determine needs and how Project HOPE and partners can best fulfill gaps. 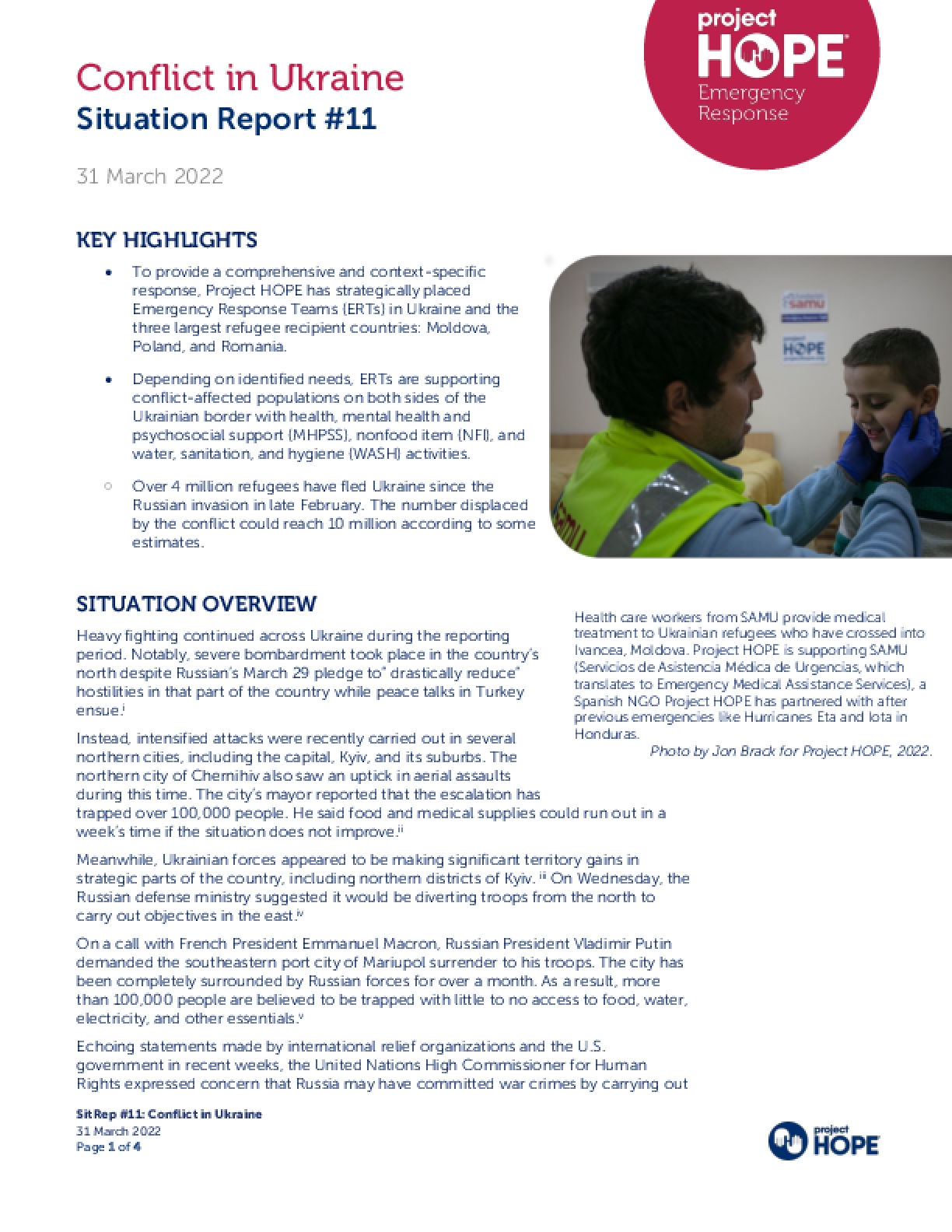 In response to the ongoing crisis, Project HOPE has strategically placed teams in Ukraine and the three largest refugee recipient countries: Moldova, Poland, and Romania. Project HOPE is partnering with actors on the ground—including government officials, local relief organizations, and INGOs—to provide critical relief to conflict-affected populations on both sides of Ukraine's borders.In Ukraine, Project HOPE is importing 47 pallets of hygiene kits, vitamins, and medical supplies in Lviv for onward distribution. These items are expected in Ukraine early next and week will be delivered westward by Project HOPE's partner in Ukraine. 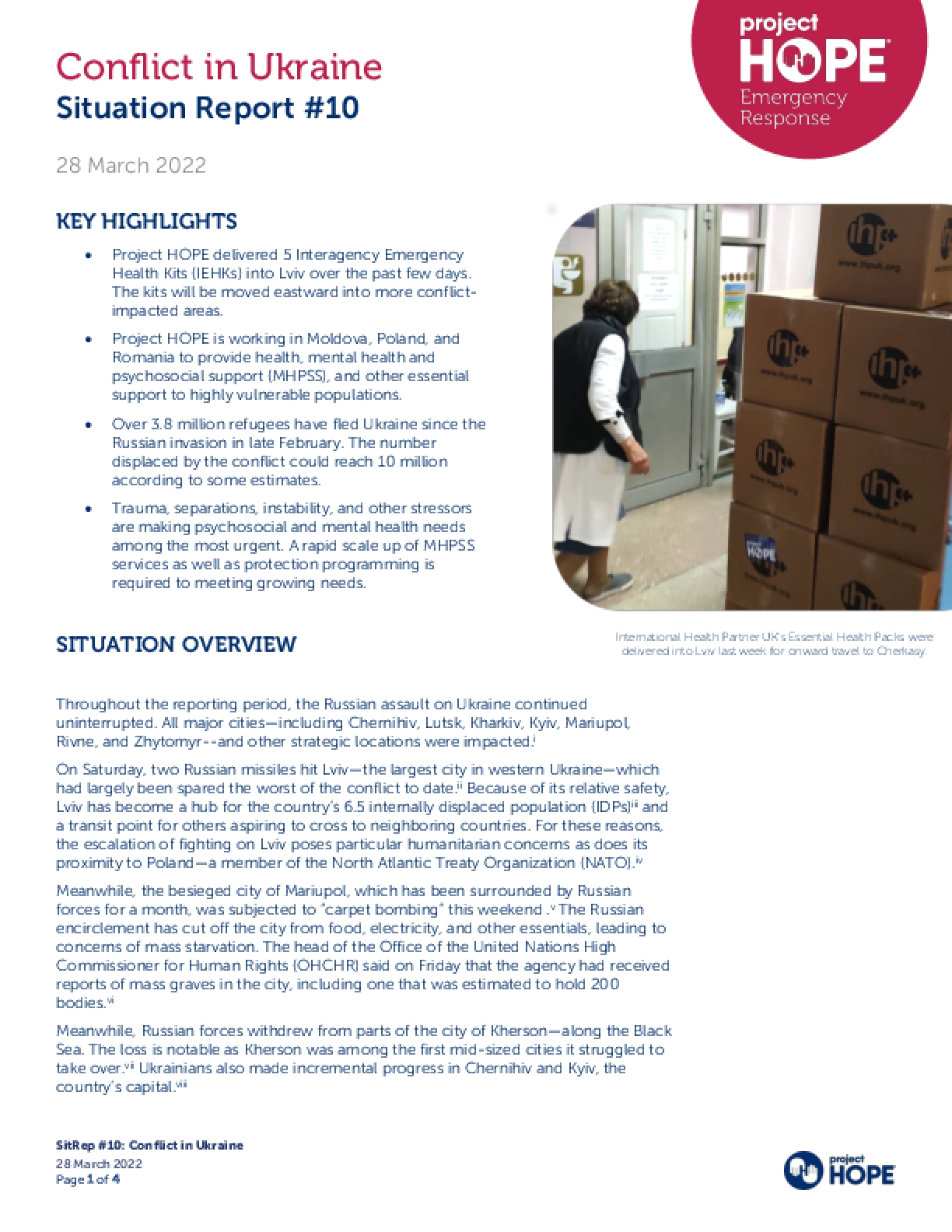 Project HOPE continues to rapidly scale up activities in Ukraine, Poland, Moldova, and Romania, with team leads, medical coordinators, mental health specialists, and logisticians in place. We continue to procure and deliver medical supplies into Ukraine, as well as to support local NGOs in providing support to impacted populations.In Ukraine, Project HOPE recently delivered five Interagency Emergency Health Kits to Lviv, which are now headed for onward distribution eastward. These medicines and medical supplies will support tens of thousands of Ukrainians over the coming months. 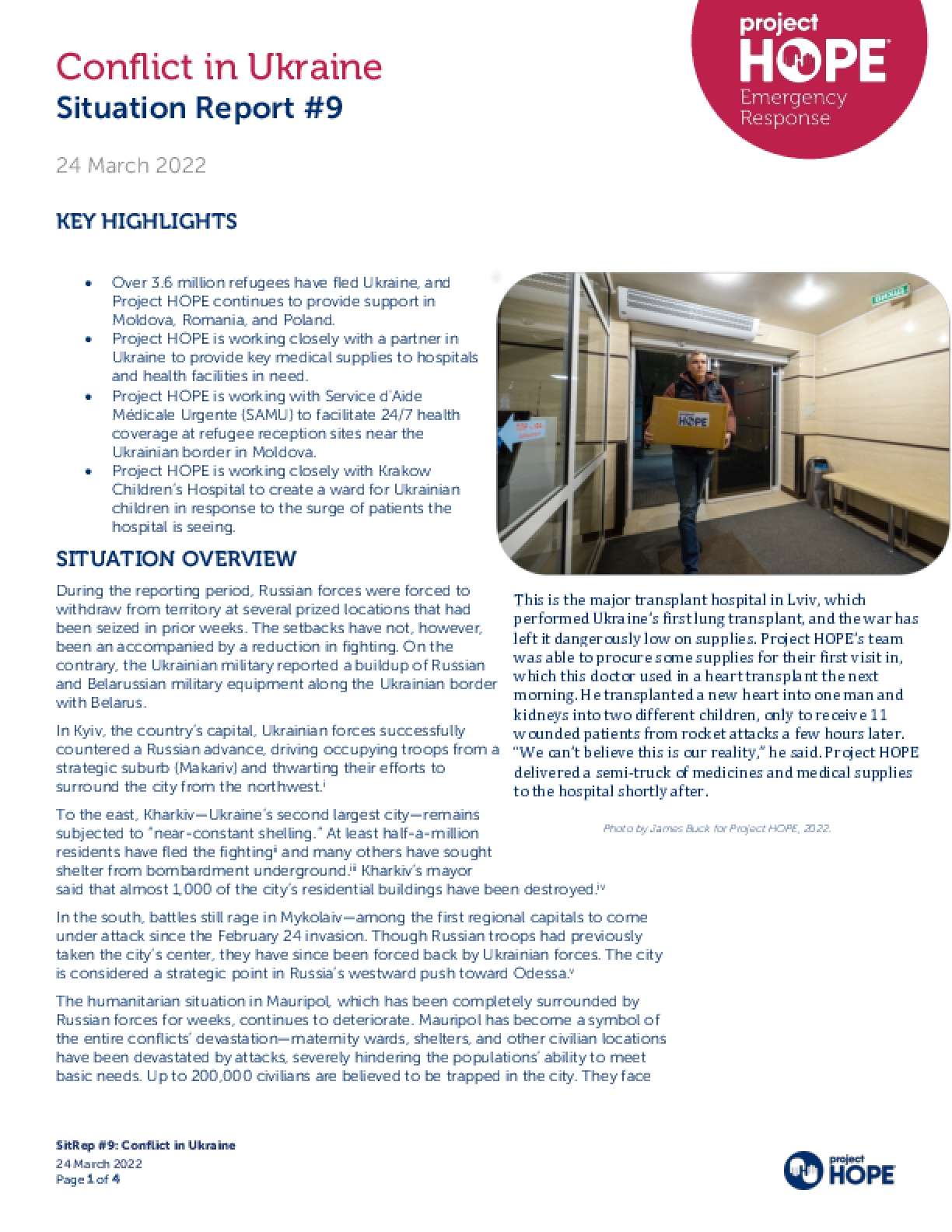 Project HOPE's dual approach to the impact of the conflict has focused on providing support inside Ukraine through medical resupply as well as mental health and protection initiatives, as well as support to the refugee populations in Moldova, Poland, and Romania.In Poland, we're working with Krakow Children's Hospital to supply a new ward for Ukrainian children, including the procurement of pharmaceuticals, medical supplies, and more. The surge of additional patients to the hospitals has necessitated additional space and personnel to serve the Ukrainian population, and Project HOPE has had an extensive, multi-decade relationship with Krakow Children's Hospital.Project HOPE continues to expand our partnerships and activities across the region, including working with Estuar Foundation in Romania to provide mental health training to health professionals and providing mental health consultations to Ukrainian refugees in Romania. 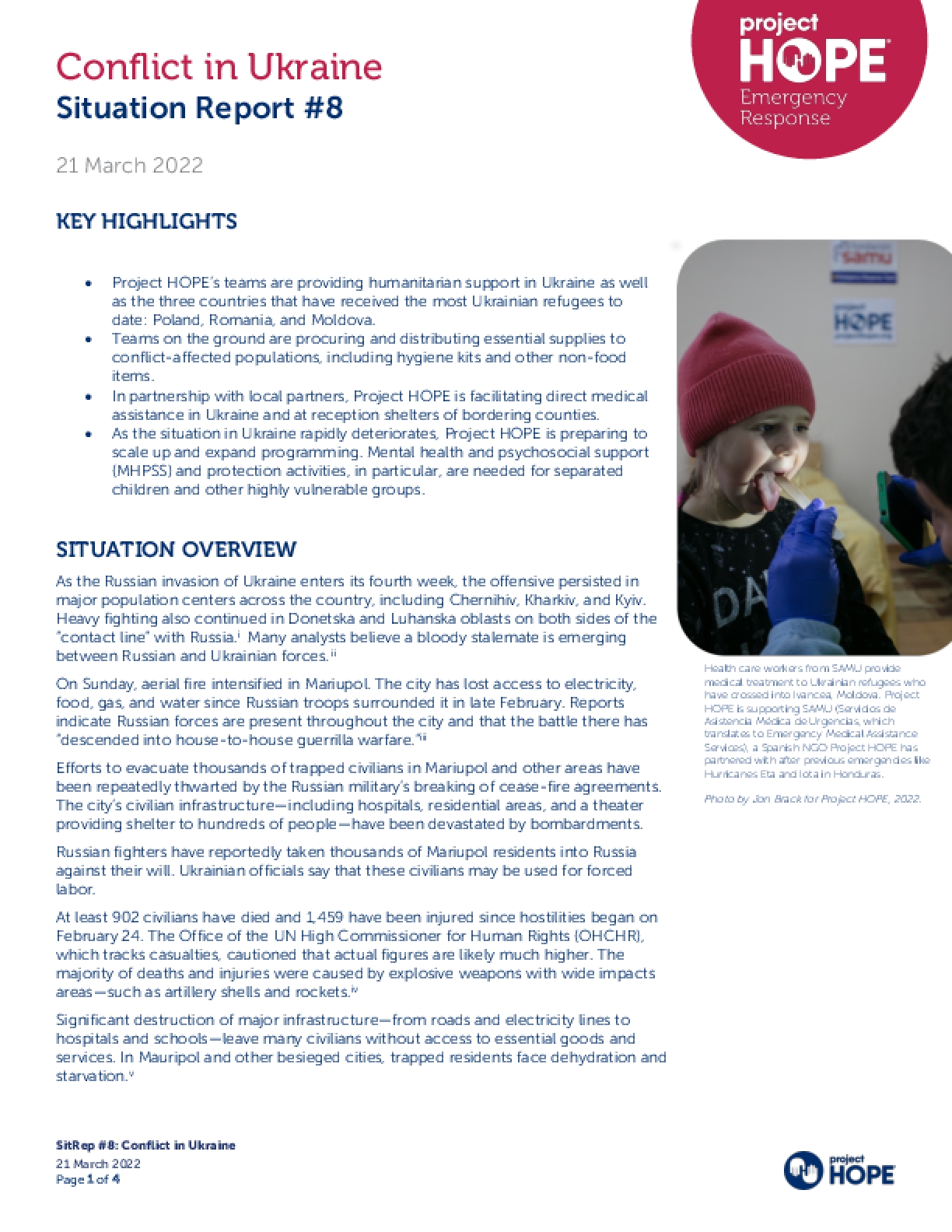 Project HOPE continues to scale up our response in Moldova, Poland, Romania, and Ukraine as the violence continues and the number of refugees increases. In the last few days, Project HOPE successfully moved shipments from Poland into Ukraine and is anticipating a shipment from Moldova to be transported into Odessa this week.We're working with government officials in Romania to import medicines, medical supplies, and other humanitarian goods into Ukraine, and exploring multiple supply routes to get these supplies to where they need to go.We've provided grants to a number of small NGOs supporting refugees in Romania and anticipate releasing more funds to NGOs in Poland this week, including for mental health and psychological first aid support. Additionally, our team in Ukraine is exploring the expansion of programming from medical resupply into psychosocial, protection, and water, sanitation, and hygiene support. 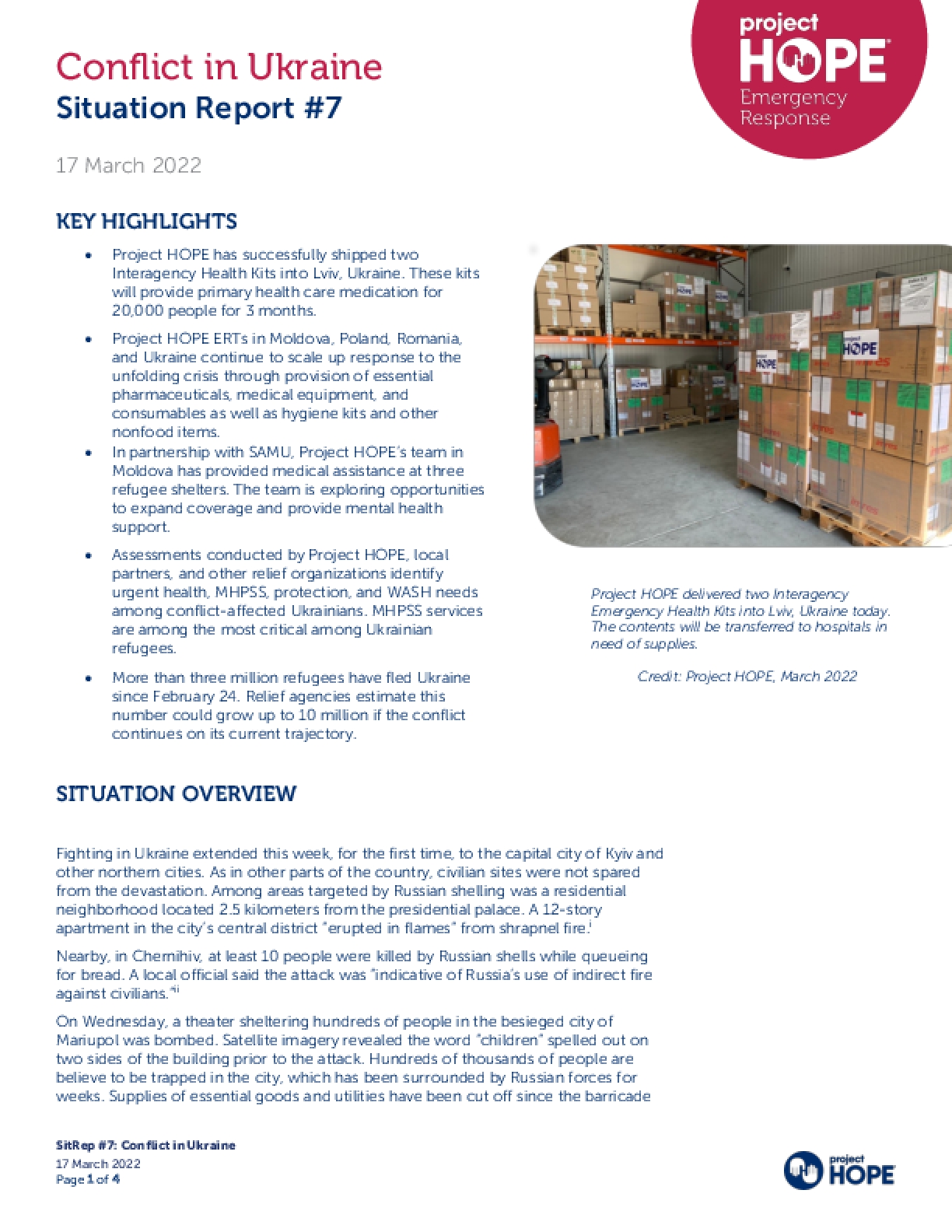 Project HOPE's response to the Ukraine crisis continues to expand inside and around Ukraine, including the delivery of two Interagency Health Kits into Lviv, Ukraine today. These kits will provide enough primary health care medication to provide for 20,000 people over the next three months.Project HOPE is also facilitating the transport of five pallets of anesthesia and injectables from Krakow into Lviv this week. Additional IEHKs will be transported into Ukraine next week, as well as International Health Partner UK's Emergency Health Packs and other supplies.To date, Project HOPE's support has included the delivery of essential medicines, medical equipment, and consumables as well as hygiene kits and other non-food items like towels and bedding. Project HOPE's teams are also working with partners and developing action plans to address health, mental health and psychosocial support (MHPSS), additional non-food items, protection, and water and hygiene needs in Ukraine and among refugees. 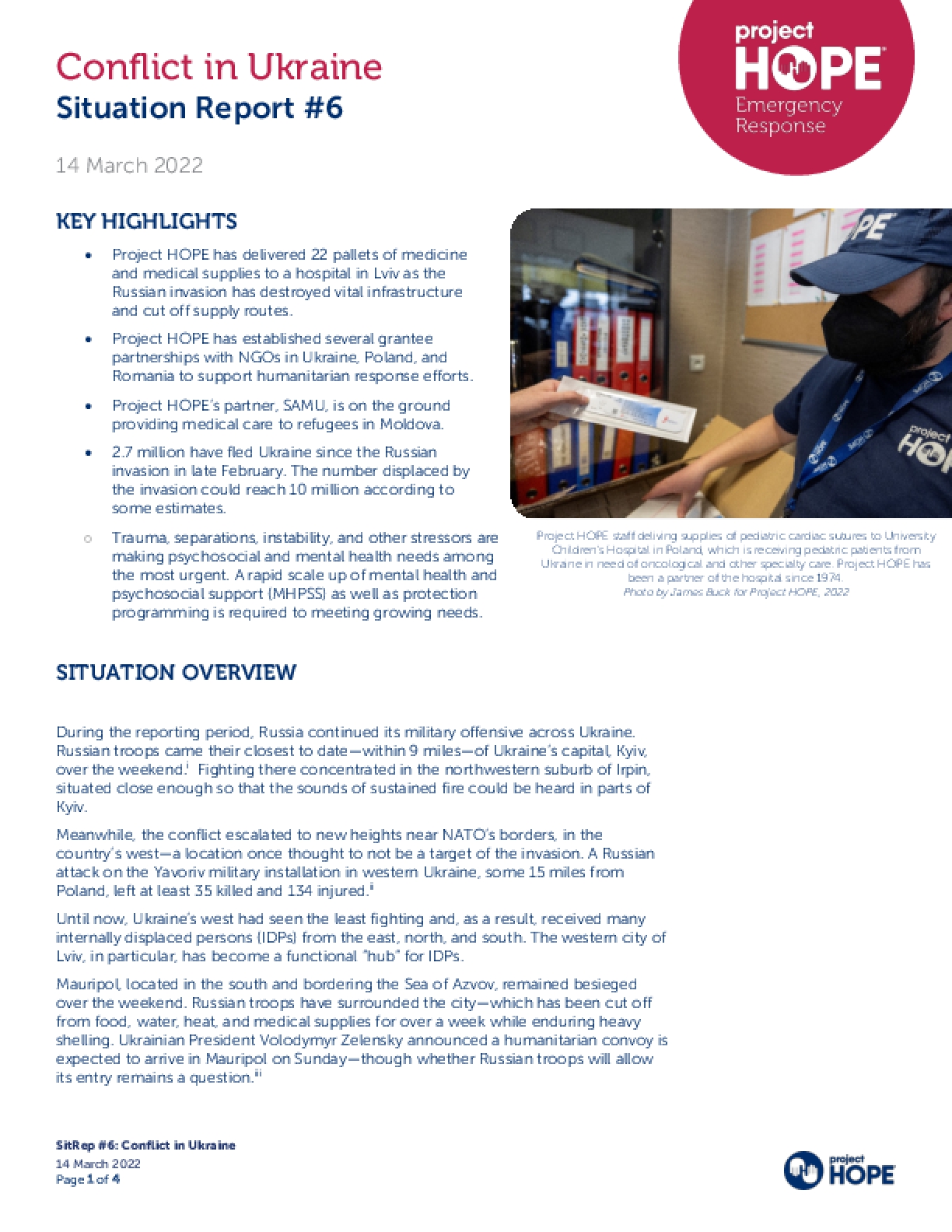 As airstrikes draw closer to the western city of Lviv, Project HOPE delivered a large shipment of antibiotics, surgical supplies, and other medical necessities to First Emergency Territorial Hospital in Lviv this morning.Project HOPE's Emergency Response Team stayed at the hospital over the weekend and was also able to provide badly-needed medical supplies, including cardiac sutures that were used in a heart transplant at the hospital.More relief for Ukraine is on the way: We are also mobilizing two Interagency Health Kits (IEHKs) to Ukraine, which are expected to arrive later this week, as well as two pallets of International Health Partner UK's Emergency Health Packs, which are expected to arrive next week in Lviv. Project HOPE is also supporting a Ukrainian non-governmental organization so that they can purchase and transport pharmaceuticals and medical supplies to civilian hospitals throughout the country.Project HOPE's response continues to expand in Poland, Moldova, and Romania, including support for a mobile medical team that is treating refugee children crossing the Ukraine/Moldova border. 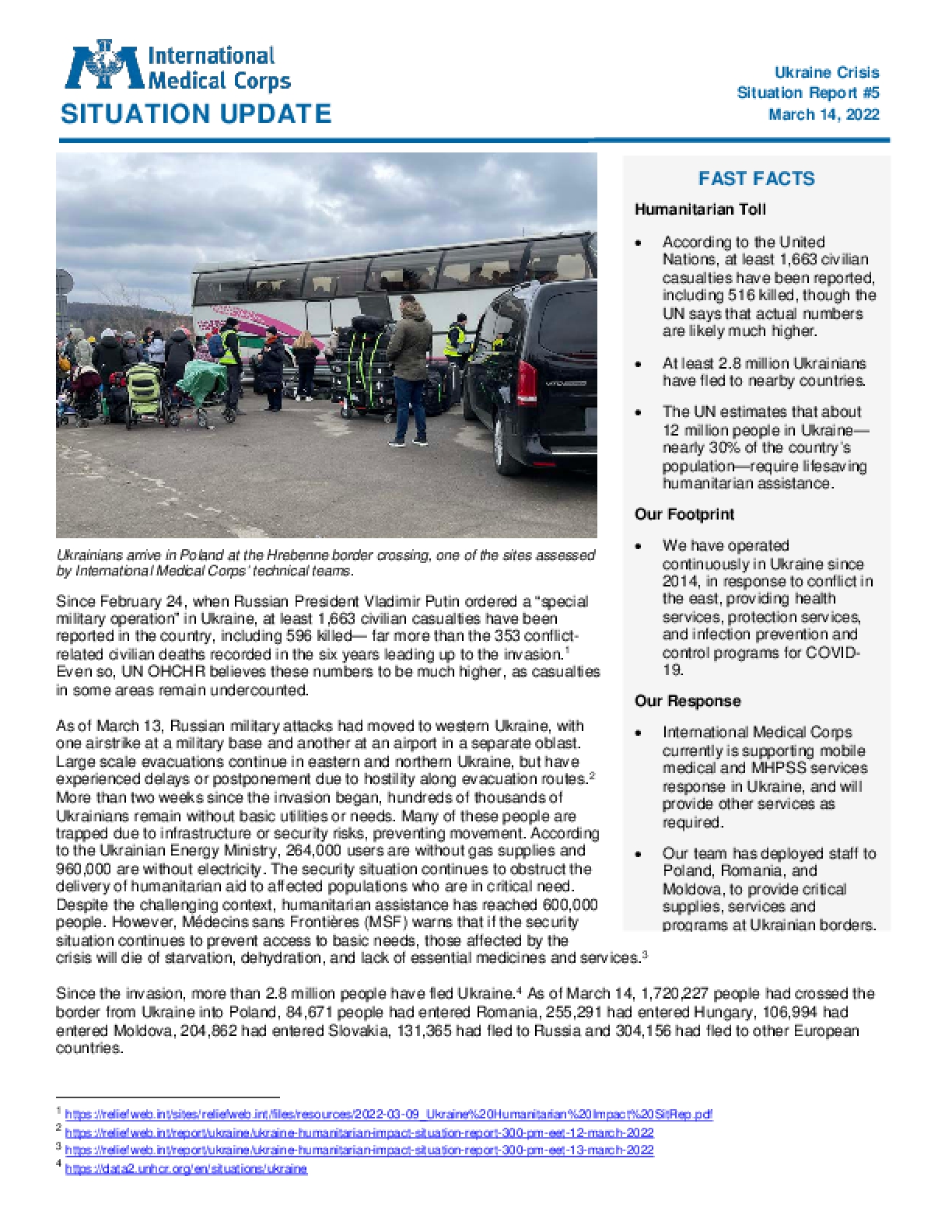 Since February 24, when Russian President Vladimir Putin ordered a "special military operation" in Ukraine, at least 1,663 civilian casualties have been reported in the country, including 596 killed— far more than the 353 conflict-related civilian deaths recorded in the six years leading up to the invasion. Even so, UN OHCHR believes these numbers to be much higher, as casualties in some areas remain undercounted.As of March 13, Russian military attacks had moved to western Ukraine, with one airstrike at a military base and another at an airport in a separate oblast. Large scale evacuations continue in eastern and northern Ukraine, but have experienced delays or postponement due to hostility along evacuation routes. More than two weeks since the invasion began, hundreds of thousands of Ukrainians remain without basic utilities or needs. Many of these people are trapped due to infrastructure or security risks, preventing movement. According to the Ukrainian Energy Ministry, 264,000 users are without gas supplies and 960,000 are without electricity. The security situation continues to obstruct the delivery of humanitarian aid to affected populations who are in critical need. Despite the challenging context, humanitarian assistance has reached 600,000 people. However, Médecins sans Frontières (MSF) warns that if the security situation continues to prevent access to basic needs, those affected by the crisis will die of starvation, dehydration, and lack of essential medicines and services.Since the invasion, more than 2.8 million people have fled Ukraine. As of March 14, 1,720,227 people had crossed the border from Ukraine into Poland, 84,671 people had entered Romania, 255,291 had entered Hungary, 106,994 had entered Moldova, 204,862 had entered Slovakia, 131,365 had fled to Russia and 304,156 had fled to other European countries.