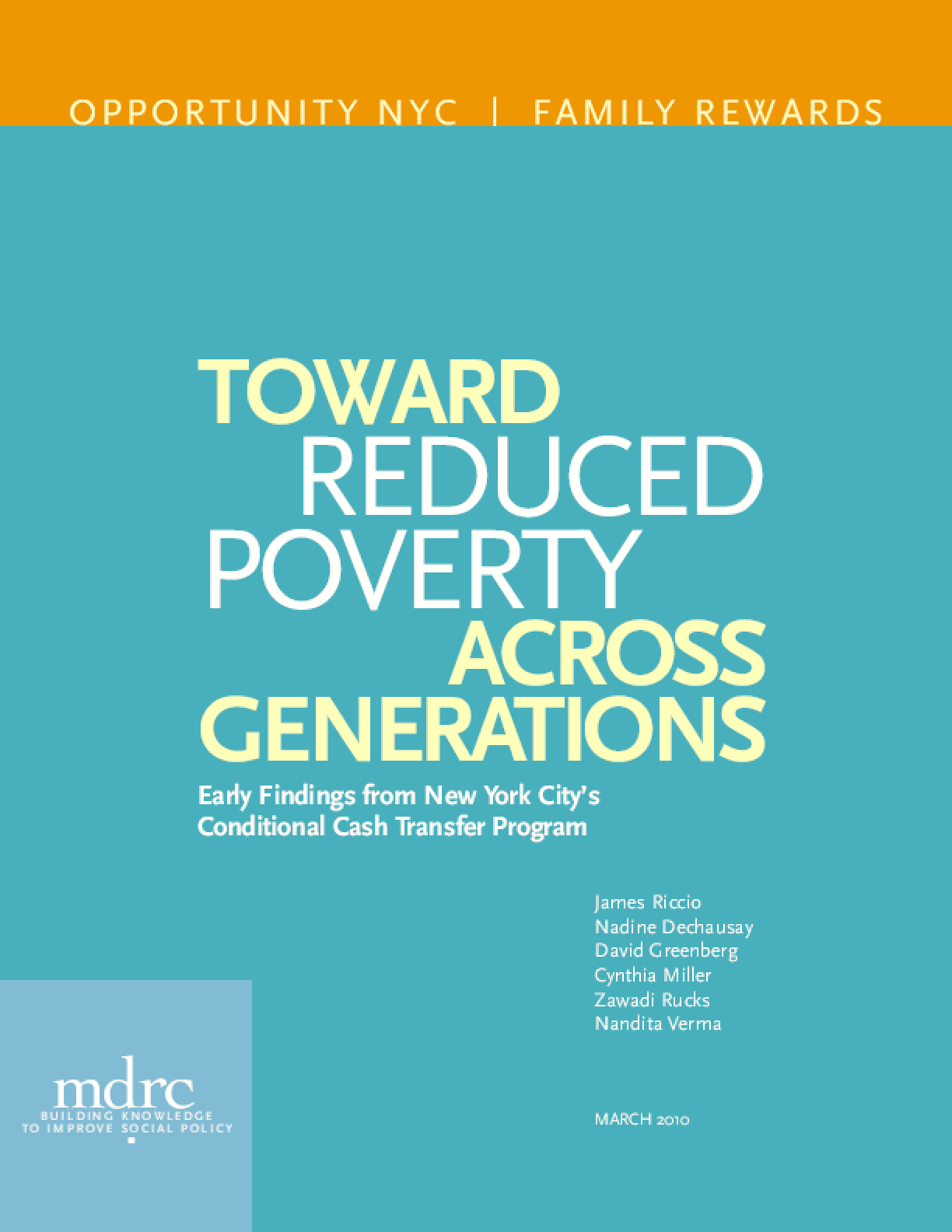 In 2007, New York City launched Opportunity NYC -- Family Rewards, an experimental, privately funded, conditional cash transfer (CCT) program to help families break the cycle of intergenerational poverty. CCT programs offer cash assistance to reduce immediate hardship and poverty but condition this assistance -- or cash transfers -- on families' efforts to improve their "human capital" (typically, children's educational achievement and family health) in the hope of reducing their poverty over the longer term. Such programs have grown rapidly across lower- and middle-income countries, and evaluations have found some important successes. Family Rewards is the first comprehensive CCT program in a developed country.Aimed at low-income families in six of New York City's highest-poverty communities, Family Rewards ties cash rewards to a pre-specified set of activities and outcomes in the areas of children's education, family preventive health care, and parents' employment. The program is available to 2,400 families for three years. Inspired by Mexico's pioneering Oportunidades program, Family Rewards' program effects are being measured via a randomized control trial.The Family Rewards demonstration is one of 40 initiatives sponsored by New York City's Center for Economic Opportunity (CEO), a unit within the Office of Mayor Michael R. Bloomberg that is responsible for testing innovative strategies to reduce the number of New Yorkers who are living in poverty. Two national, New York-based nonprofit organizations -- MDRC, a nonpartisan social policy research firm, and Seedco, a workforce and economic development organization -- worked in close partnership with CEO to design the demonstration. Seedco, together with a small network of local community-based organizations, is operating Family Rewards, and MDRC is conducting the evaluation and managing the overall demonstration. A consortium of private funders is supporting the project.1This report presents the initial findings from an ongoing and comprehensive evaluation of Family Rewards. It examines the program's implementation in the field and families' responses to it during the first two of its three years of operations. This evaluation period, beginning in September 2007 and ending in August 2009, encompasses a start-up phase as well as a stage when the program was beginning to mature. The report also presents early findings on the program's effects, or "impacts," on a wide range of outcome measures. For some measures, the results cover only the first program year, while for others they also cover part or all of the second year. No data are available yet on the third year. The evaluation findings are based on analyses of a wide variety of administrative records data, responses to a survey of parents that was administered about 18 months after random assignment, and qualitative in-depth interviews with program staff and families.Overall, this study shows that, despite an extraordinarily rapid start-up and early challenges, the program was operating largely as intended by its second year. Although many families struggled with the complexity of the program, most were substantially engaged with it and received a large amount of money for meeting the conditions it established. During the period covered by the report, Family Rewards reduced current poverty (its main short-term goal) and produced a range of effects on a variety of outcomes across all three program domains (children's education, family health care, and parents' work and training). 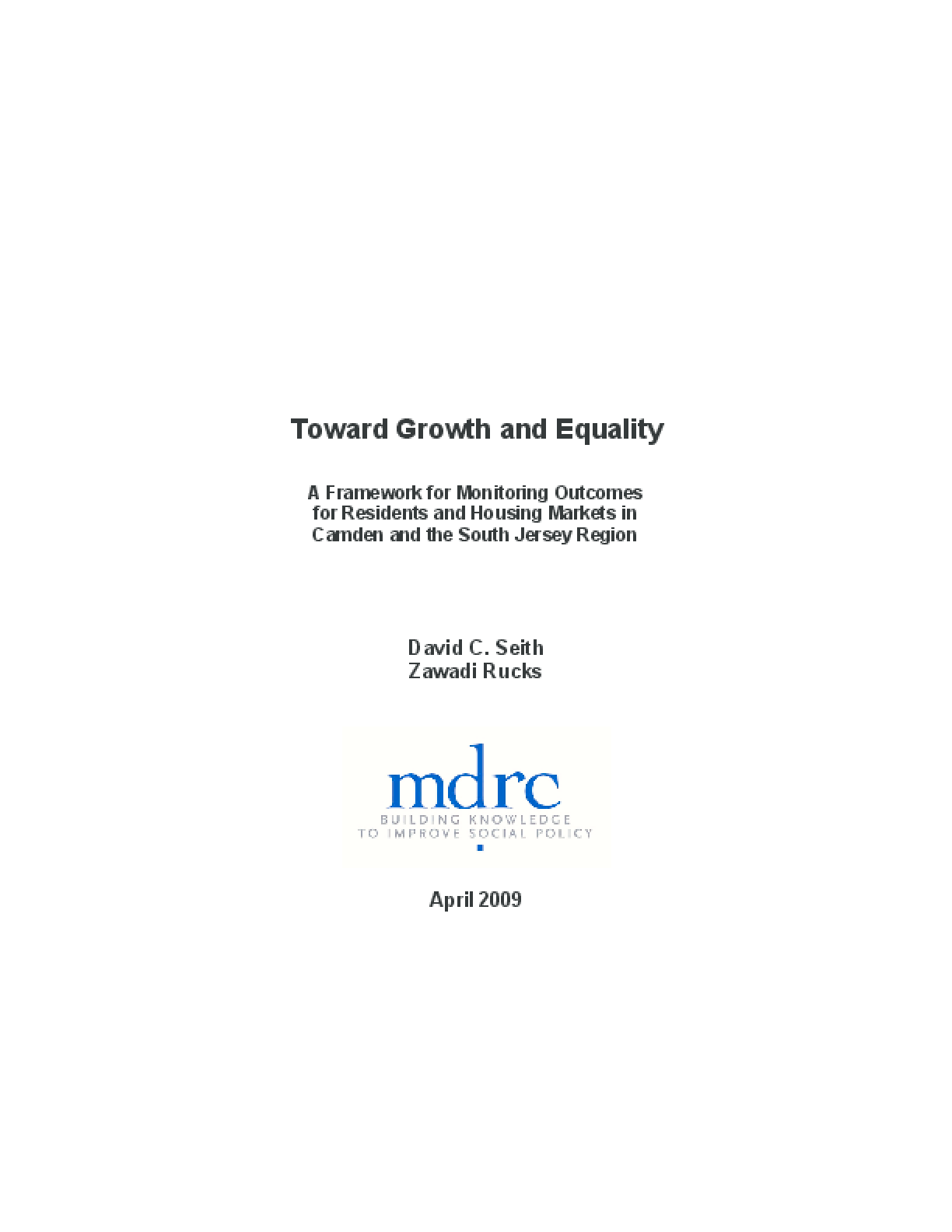 Toward Growth and Equality: A Framework for Monitoring Outcomes for Residents and Housing Markets in Camden and the South Jersey Region

This paper offers a framework for tracking the extent to which demographic, labor, and housing market conditions are moving in or out of alignment with a range of goals for redevelopment in Camden, New Jersey. 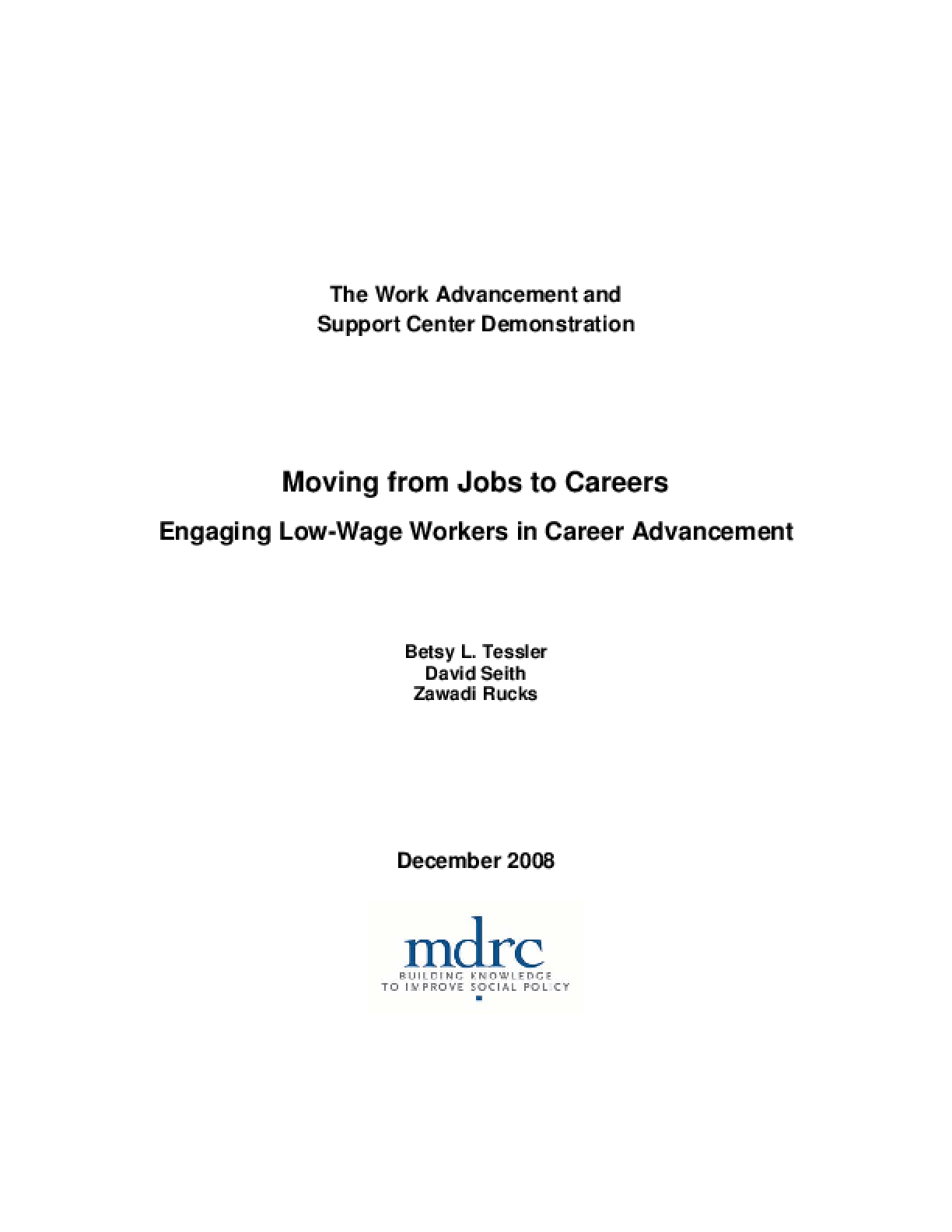 The Work Advancement and Support Center (WASC) demonstration offers a new approach to helping low-wage and dislocated workers advance by increasing their wages or work hours, upgrading their skills, or finding better jobs. At the same time, these workers are encouraged to augment and stabilize their income by making the most of available work supports, such as food stamps, public health insurance, subsidized child care, and tax credits. This report presents preliminary information on the effectiveness of strategies that were used to attract people to the WASC program and engage them in services.