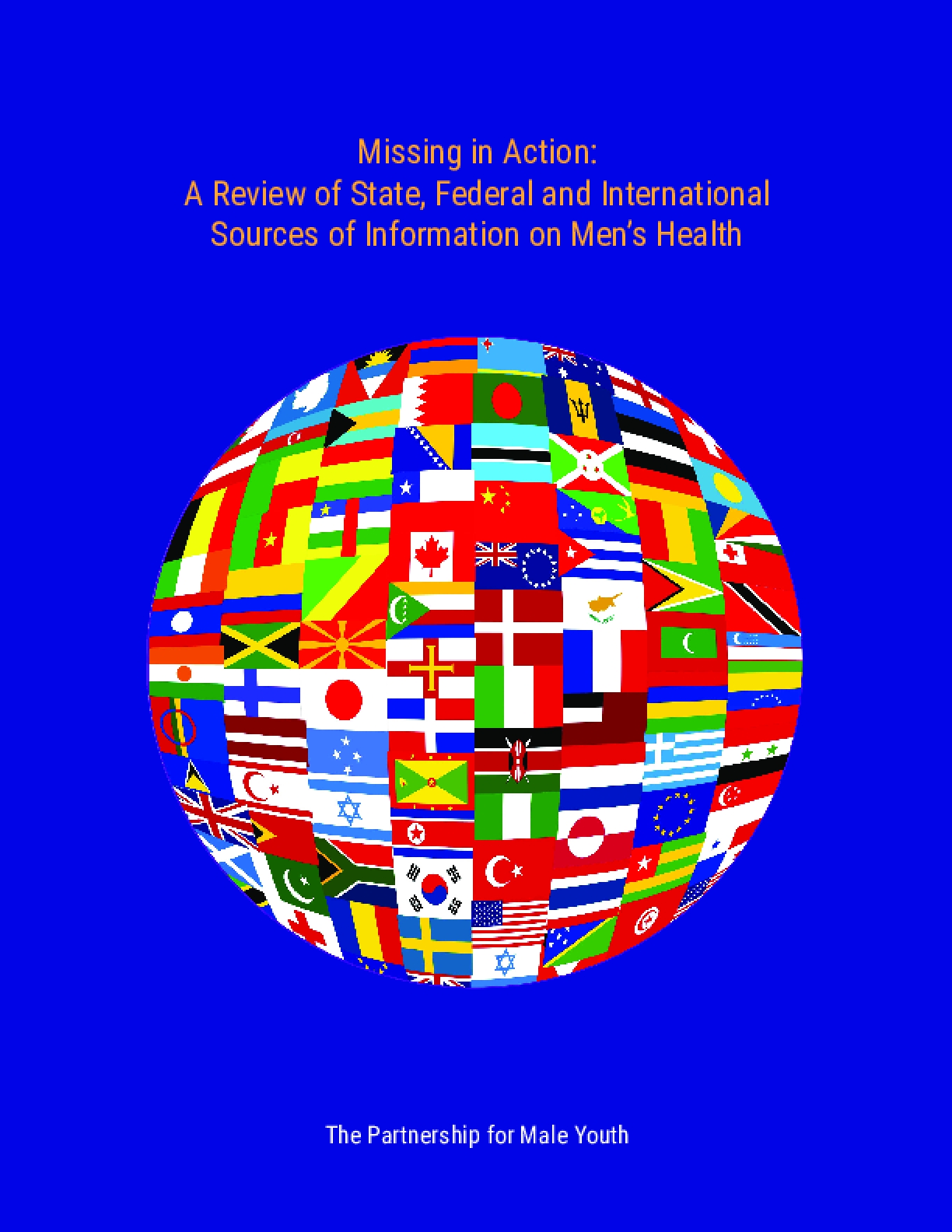 Missing in Action: A Review of State, Federal and International Sources of Information on Men's Health

In recent decades there has been a rise in attention devoted to men's health and men's health initiatives, particularly to health behaviors, lifestyle choices, societal factors, and gender socialization (Garfield, 2008). Despite this, in the US, men continue to lag behind women in many areas of health, notably life expectancy and health care use, and are more likely to engage in risky health behaviors with higher rates of steroid, alcohol, and tobacco use; these inequities are compounded and complicated by other factors such as race, class, and sexuality (Garfield, 2008). Brott et al. estimated that premature death and morbidity in men costs federal, state and local governments in excess of $142 billion annually. Additionally, it costs employers roughly $340 billion annually in direct medical payments, lost productivity, and decreased quality of life (Fadich et al. 2018, citing Brott et al. 2011). And, although the number of male coronavirus cases is similar to the number of female cases, globally men have a higher risk of death from Covid-19 (Global Health 5050, 2021). Another study found that in 2020 American men saw the largest decline in life expectancy since World War II as it dropped by 2.2 years (Aburto et al. 2021).The Partnership for Male Youth (PMY) is the only US national organization whose sole focus is on the health and wellbeing of adolescent and young adult (AYA) males, or males between the ages of 10 and 25. PMY has undertaken this study because the genesis of the men's health problem lies in adolescence. By the time most American adolescents reach the age of 13 they've stopped seeing a pediatrician – over 80% of all pediatric visits are by children under 13 (Bocian et al., 1999). Less than half of AYAs have primary care visits within the last year (Rand & Goldstein, 2018). Males are less likely than their female counterparts to seek care (Lau et al., 2014; Callahan & Cooper, 2004; Fortuna, Robbins, & Halterman, 2009). Females have a relatively seamless transition with age with gynecologists accounting for 23-42% of AYA female preventive visits (Rand & Goldstein, 2018). For males, however, there is no similar continuity of care. On the whole, with the exception of episodic school exams, sports physicals and visits to the emergency room, once they leave the pediatrician's office AYA males are left outside of our health care system, a pattern that extends into adulthood. In the intervening years they suffer from a number of illnesses and disabilities that are cause by a lack of preventive care.The purposes of this research are: 1) to determine which, if any, significant policies and programs exist at the US state and federal levels that can serve as models for advancing men's health in the US, as evidenced by their websites; 2) to examine international efforts to advance men's health that can inform policy change in the US; and 3) to make recommendations for policies and programs based on those findings.