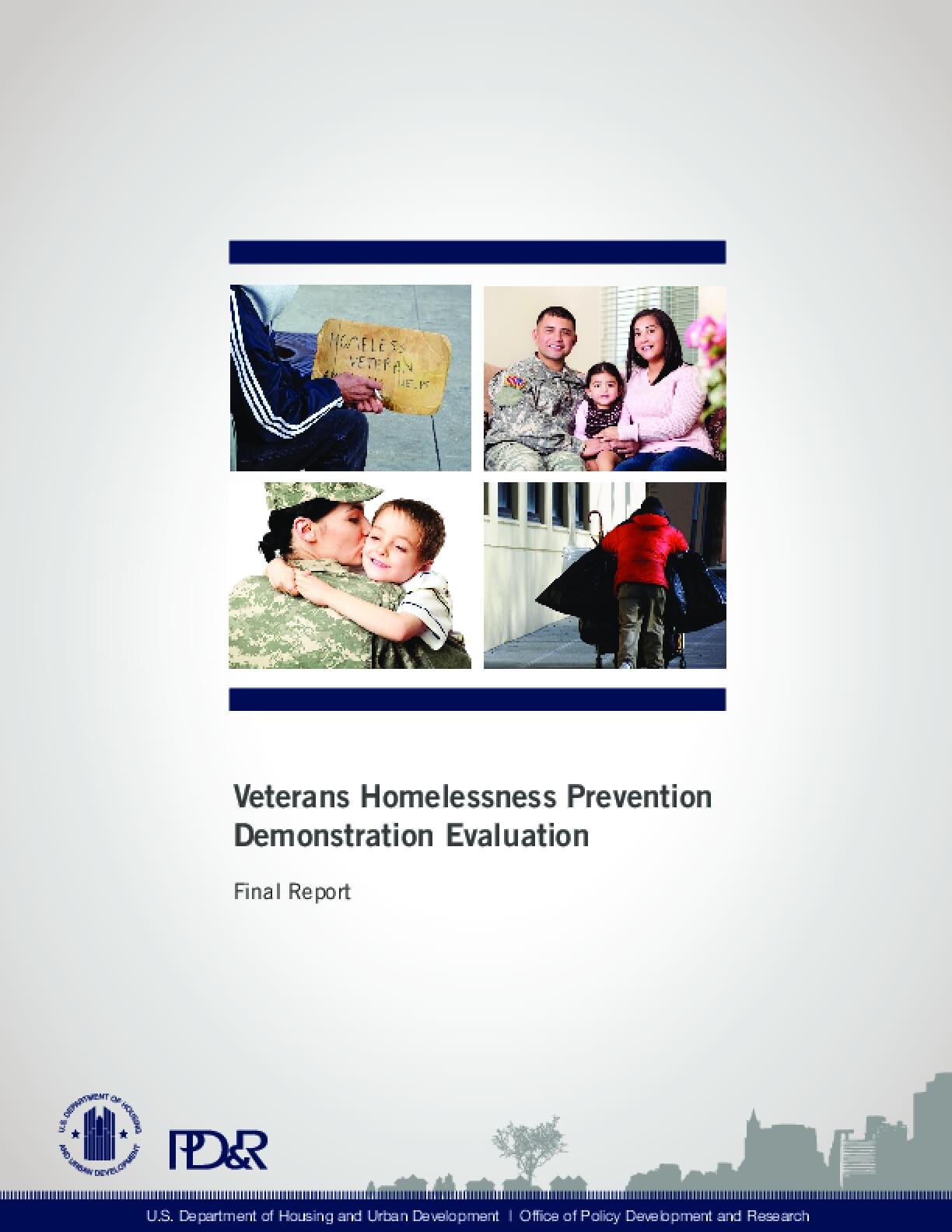 This report documents the outcomes of veterans served by the Veterans Homelessness Prevention Demonstration program (VHPD), one element of the Obama administration's signature initiative to end veteran homelessness. It describes the housing, employment, and health of veterans before they entered VHPD and 6 months after leaving the program. It discusses the lessons learned through VHPD, strongly emphasizing how important it is to reach out to veterans in ways that appeal to them (including peer-to-peer outreach and having veterans on staff) and the benefits of bringing together housing assistance, case management, and employment services. 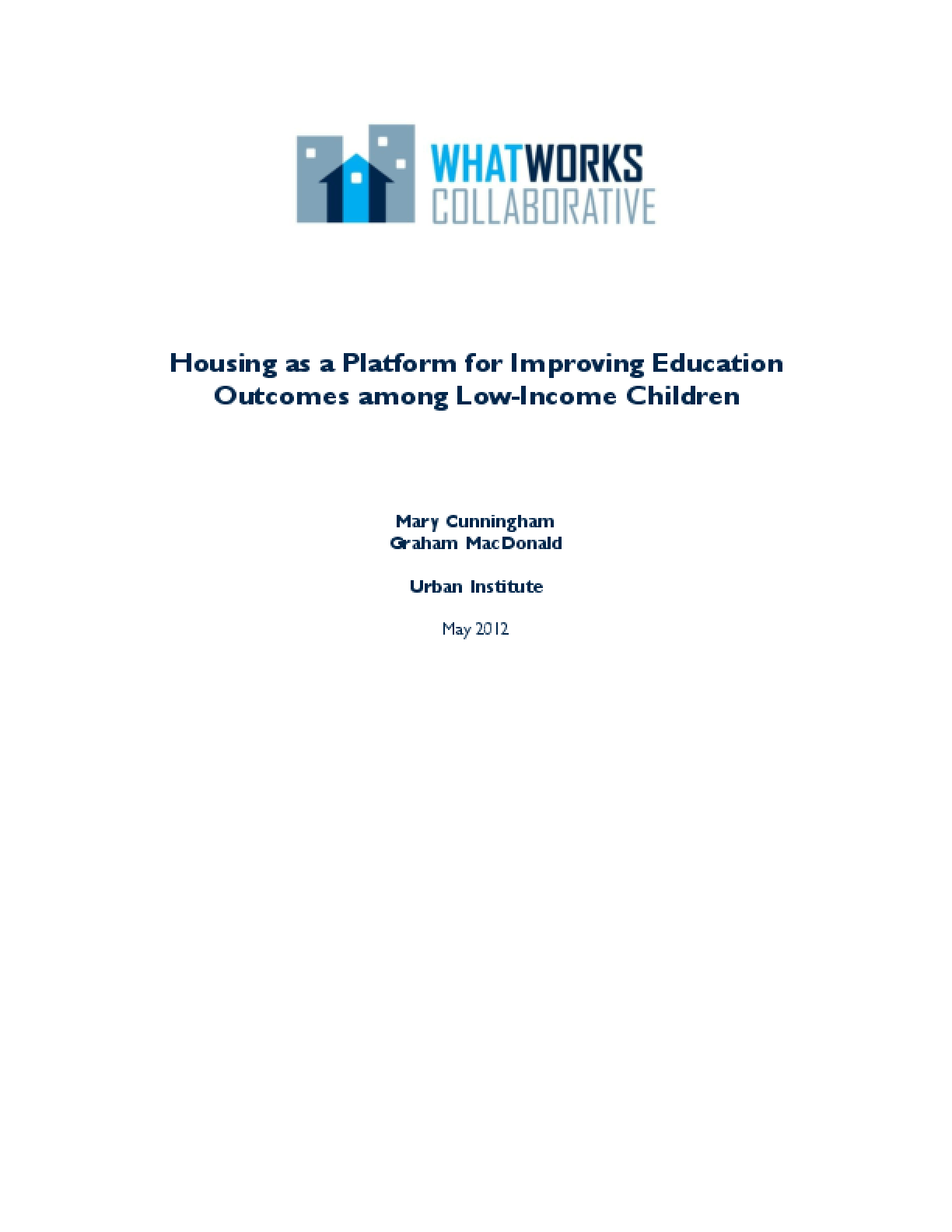 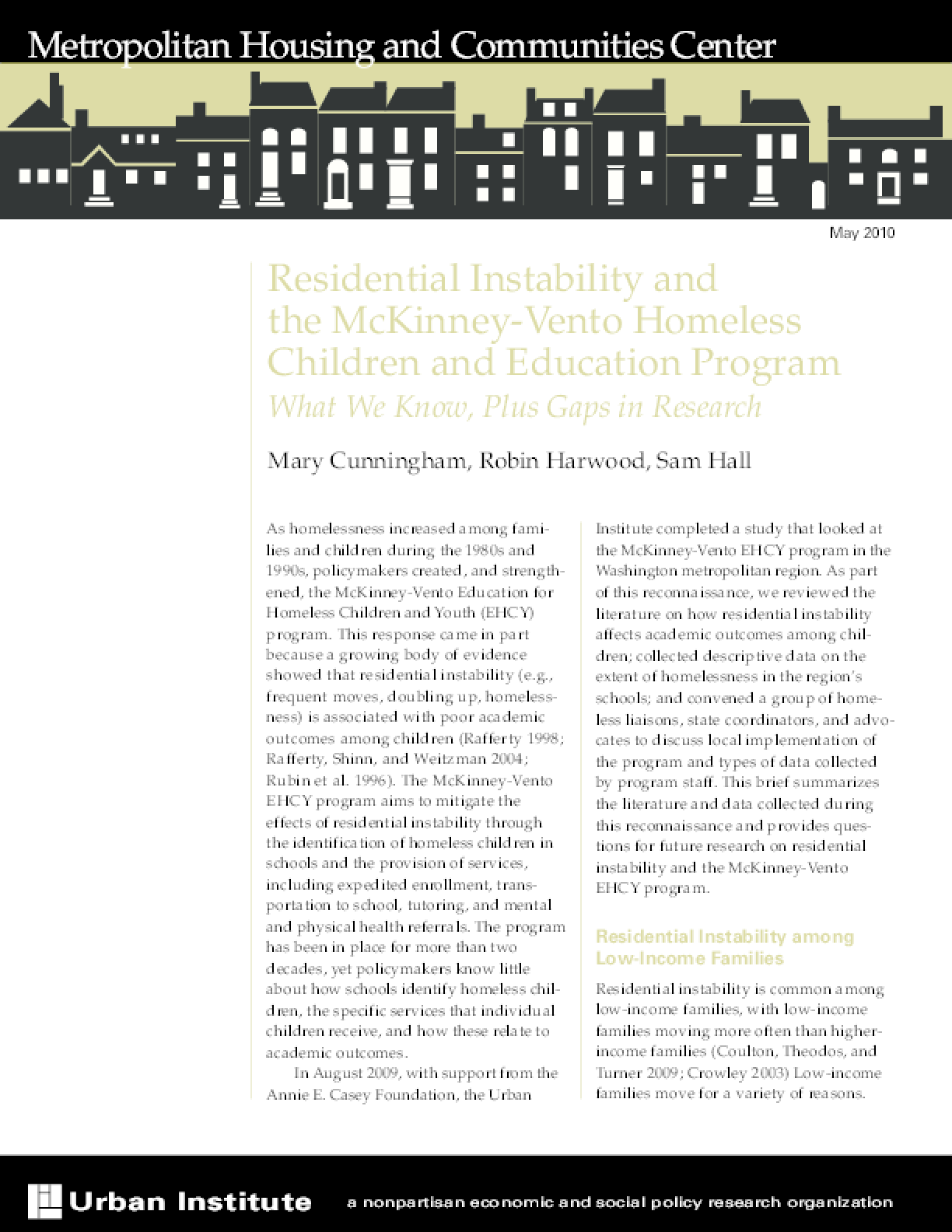 Residential Instability and the McKinney-Vento Homeless Children and Education Program: What We Know, Plus Gaps in Research

Reviews the literature on the effects of homelessness and residential instability on academic performance and describes the program designed to mitigate them. Calls for better data collection on the affected children's outcomes and the program's impact. 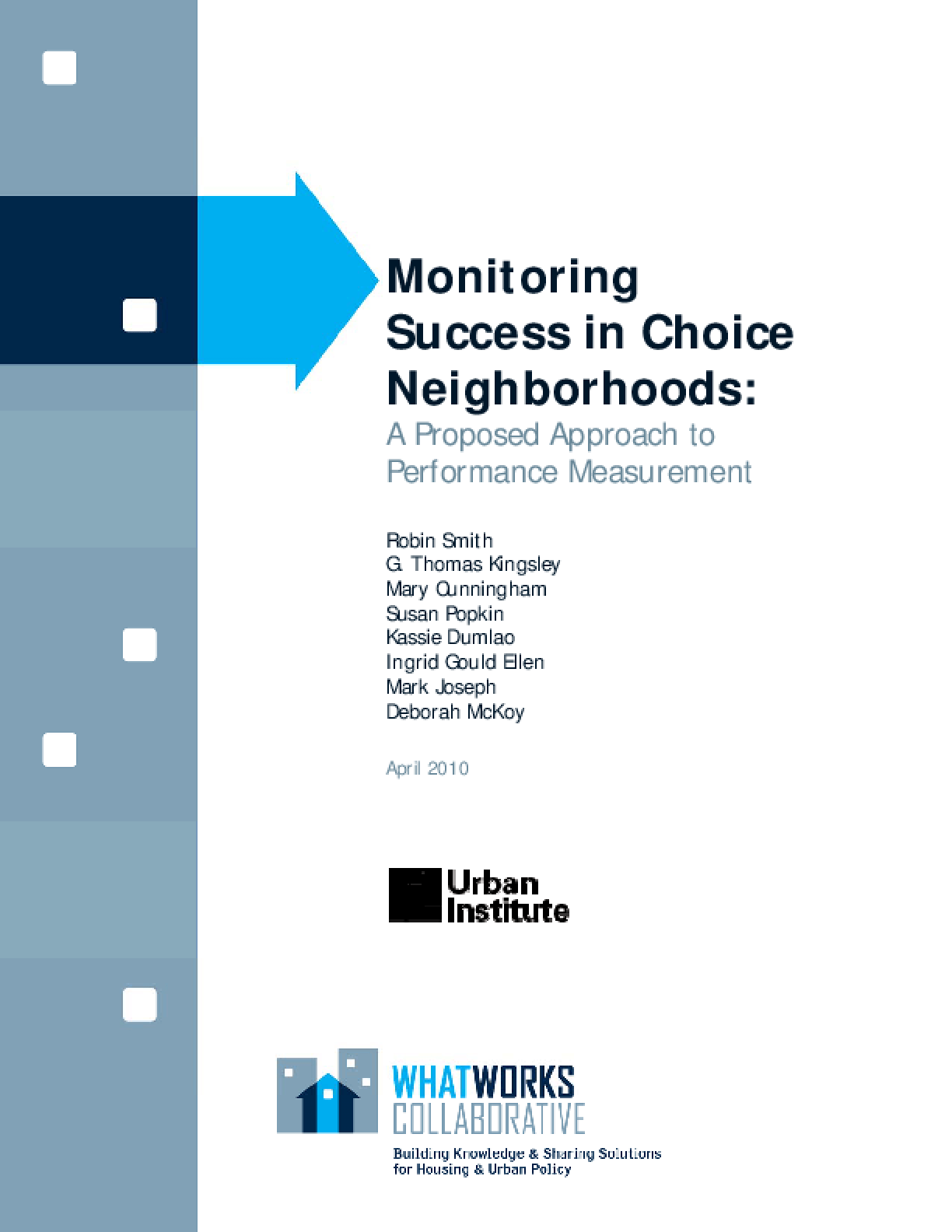 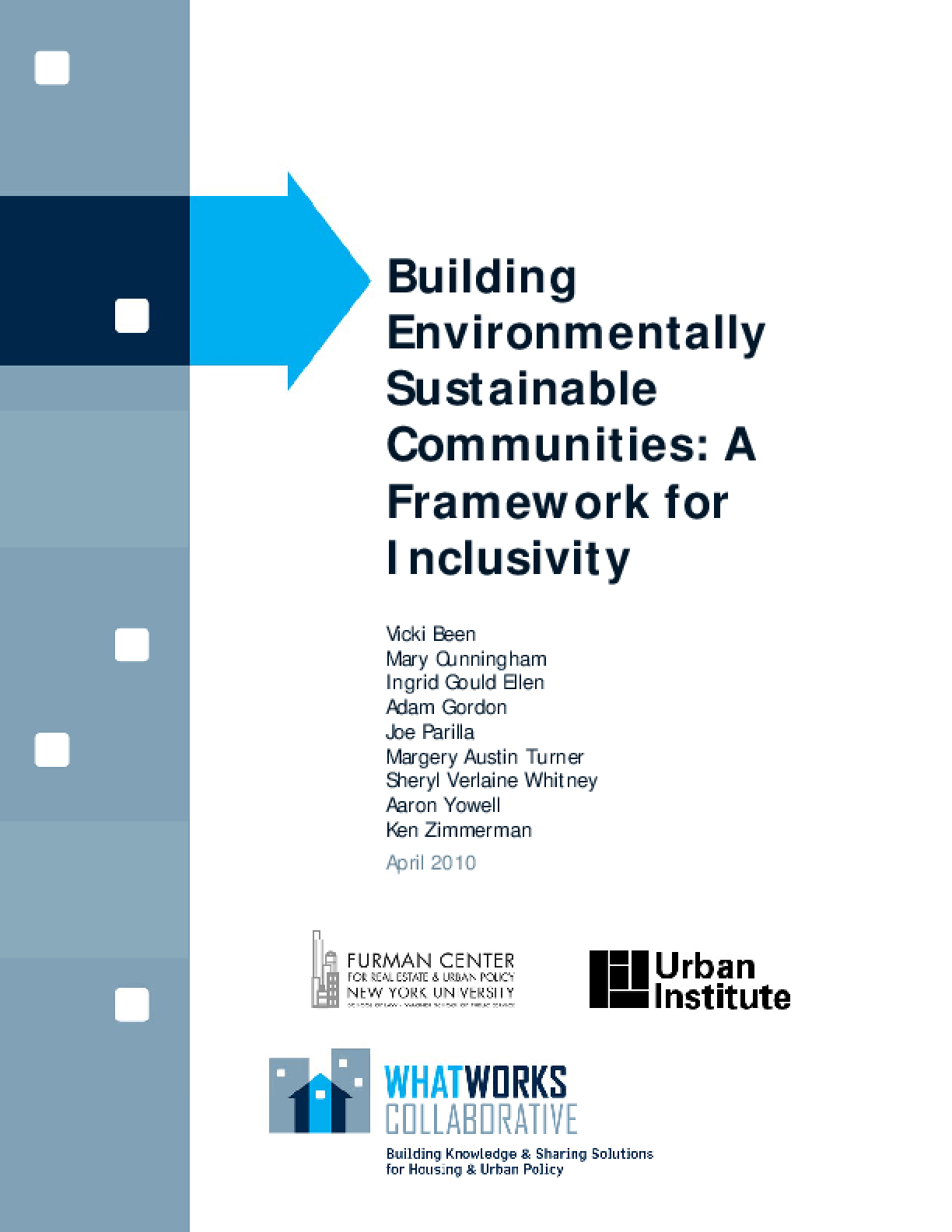 Reviews literature on past inequitable and unsustainable urban development and visions for linking sustainability, opportunity, and inclusion. Analyzes possible metrics for measuring sustainability and access as well as next steps for policy. 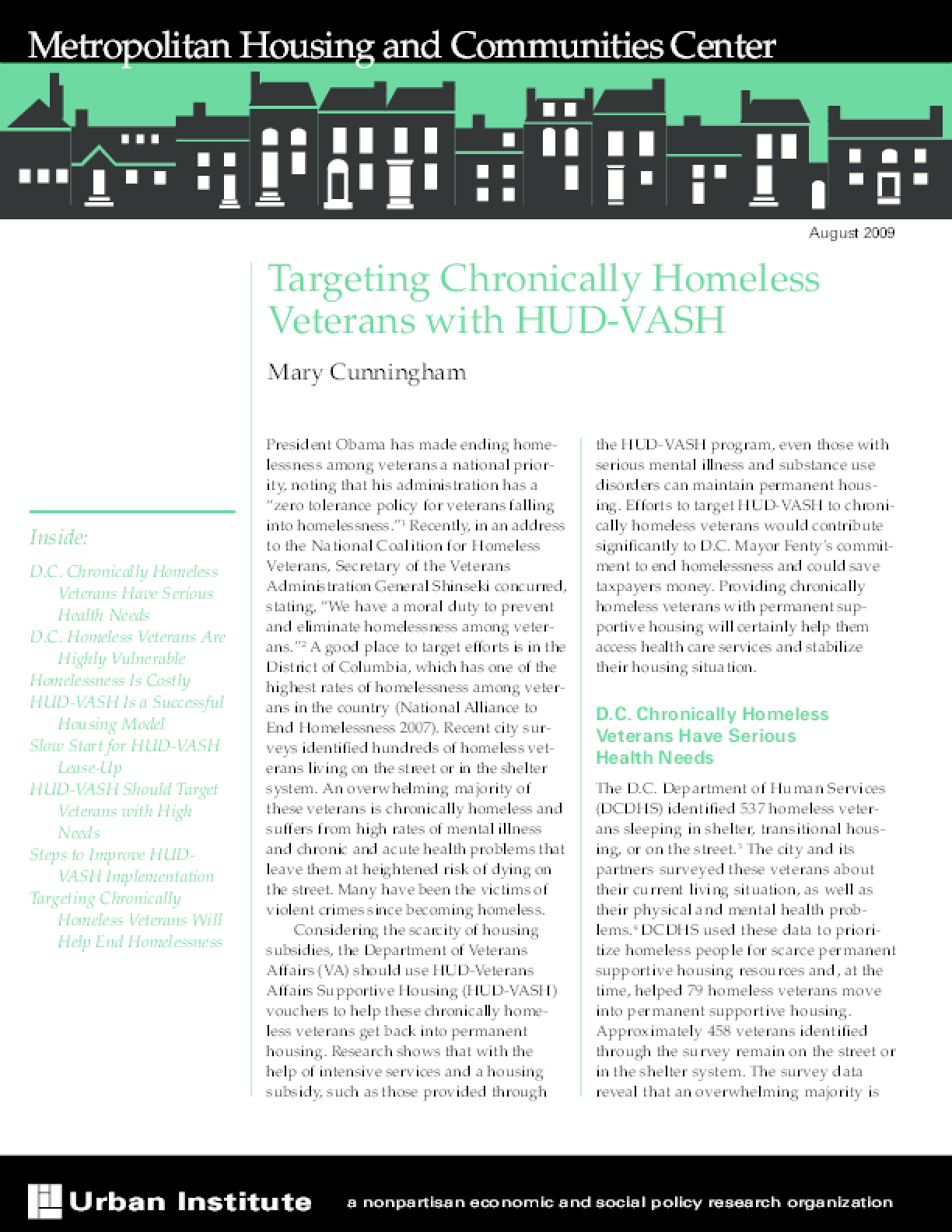 Hundreds of veterans are sleeping on the street or in the emergency shelter system in the District of Columbia. This brief examines data from the vulnerability index survey, completed by the DC Department of Health and Human Services and Common Ground, a nonprofit supportive housing provider. These data indicate that homeless veterans in DC have numerous health problems, leaving them highly vulnerable to premature mortality. The DC Veteran Affairs Medical Center should prioritize these highly vulnerable homeless veterans for HUD-VASH vouchers, which link housing subsidies with supportive services 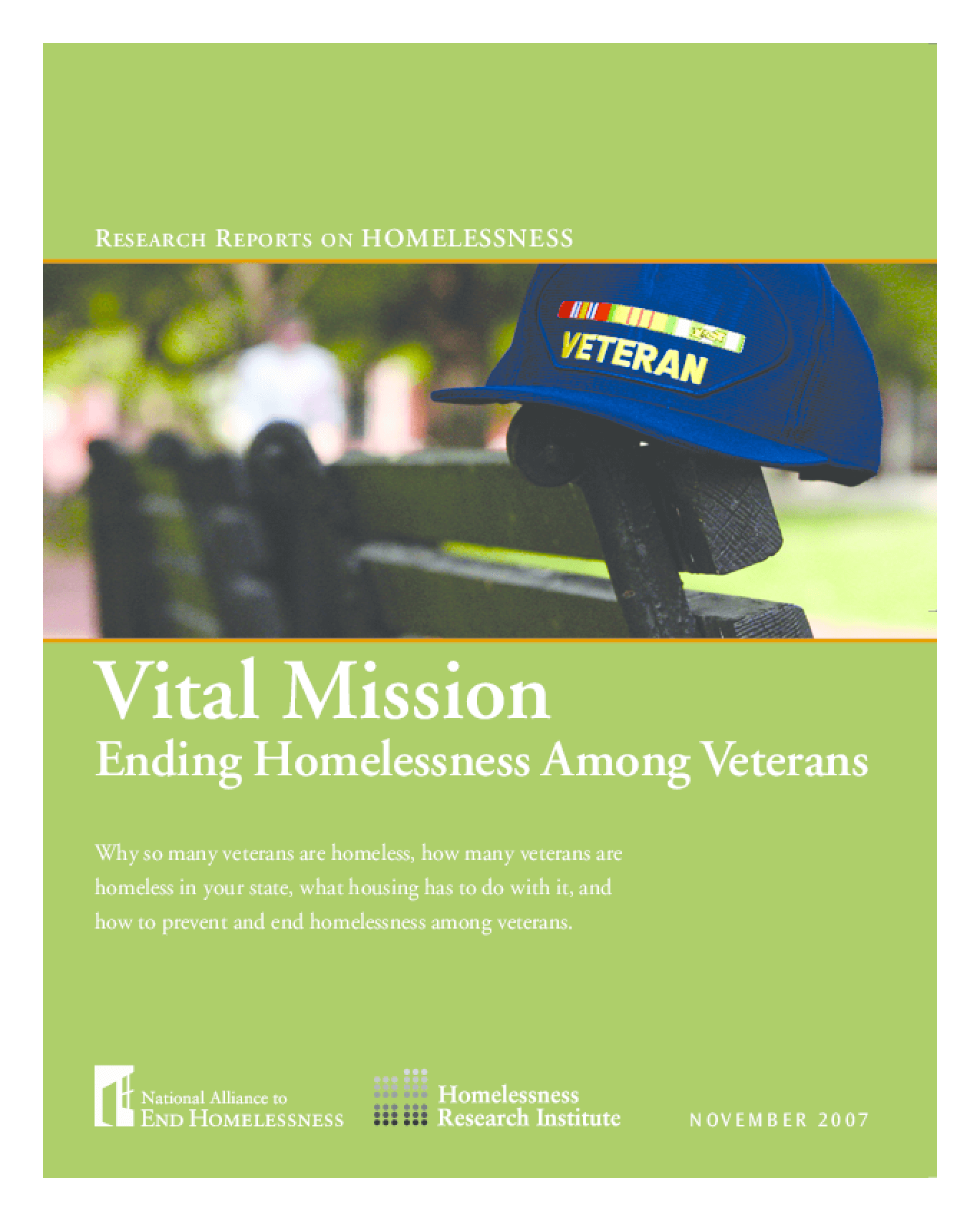 Far too many veterans are homeless in America. Homeless veterans can be found in every state across the country and live in rural, suburban, and urban communities. Many have lived on the streets for years, while others live on the edge of homelessness, struggling to pay their rent. We analyzed data from the Department of Veterans Affairs and the Census Bureau to examine homelessness and severe housing cost burden among veterans. This report includes the following findings: In 2006, approximately 195,827 veterans were homeless on a given night -- an increase of 0.8 percent from 194,254 in 2005. More veterans experience homeless over the course of the year. We estimate that 336,627 were homeless in 2006. Veterans make up a disproportionate share of homeless people. They represent roughly 26 percent of homeless people, but only 11 percent of the civilian population 18 years and older. This is true despite the fact that veterans are better educated, more likely to be employed, and have a lower poverty rate than the general population. A number of states, including Louisiana and California, had high rates of homeless veterans. In addition, the District of Columbia had a high rate of homelessness among veterans with approximately 7.5 percent of veterans experiencing homelessness. We estimate that in 2005 approximately 44,000 to 64,000 veterans were chronically homeless (i.e., homeless for long periods or repeatedly and with a disability). Lack of affordable housing is the primary driver of homelessness. The 23.4 million U.S. veterans generally do not have trouble affording housing costs; veterans have high rates of home ownership and appear generally well housed. However, there is a subset of veterans who have severe housing cost burden. We estimate that nearly half a million (467,877) veterans were severely rent burdened and were paying more than 50 percent of their income for rent. More than half (55 percent) of veterans with severe housing cost burden fell below the poverty level and 43 percent were receiving foods stamps. Rhode Island, California, Nevada, and Hawaii were the states with the highest percentage of veterans with severe housing cost burden. The District of Columbia had the highest rate, with 6.4 percent of veterans paying more than 50 percent of their income toward rent. Female veterans, those with a disability, and unmarried or separated veterans were more likely to experience severe housing cost burden. There are also differences by period of service, with those serving during the Korean War and WWII more likely to have severe housing cost burden. We estimate that approximately 89,553 to 467,877 veterans were at risk of homelessness. At risk is defined as being below the poverty level and paying more than 50 percent of household income on rent. It also includes households with a member who has a disability, a person living alone, and those who are not in the labor force. These findings highlight the need to expand homeless prevention and affordable housing programs targeted at veterans. Further the findings demonstrate that ending homelessness among veterans is a vital mission that requires the immediate attention of policymakers. 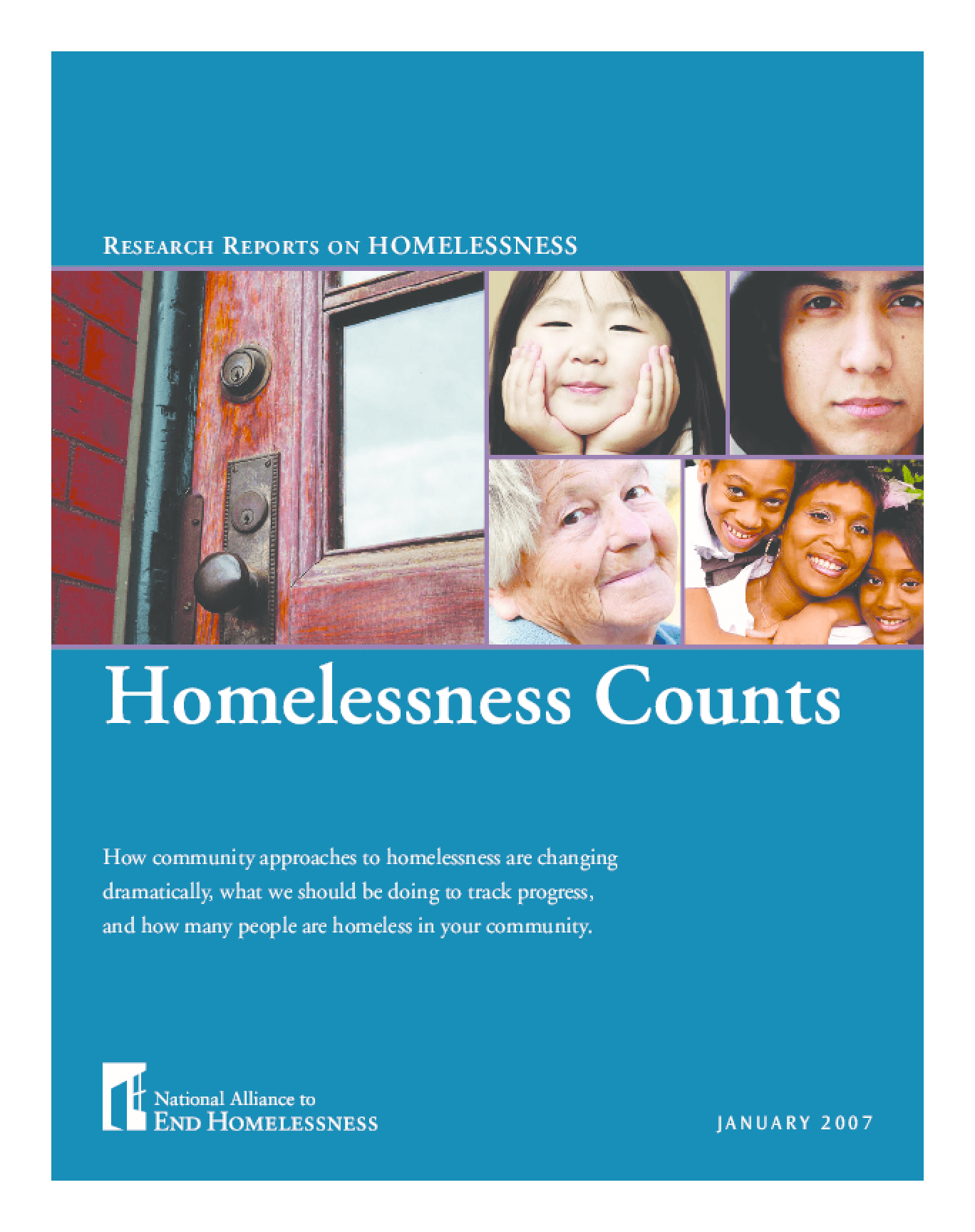 A movement to end homelessness is underway. Thousands of stakeholders -- policymakers, advocates, researchers, practitioners, former and current homeless people, community leaders, and concerned citizens -- from across the country are involved in efforts to end homelessness at the local and national level. Today, hundreds of communities are re-tooling their homeless assistance systems and have committed to ending homelessness through local plans. At the federal level, the U.S. Department of Housing and Urban Development's (HUD) homelessness assistance programs are targeting resources to permanent housing, and the Congress and the Bush Administration have committed to ending chronic homelessness by developing 150,000 units of permanent supportive housing for people who have been homeless for long periods. The private sector, through major philanthropic organizations, is engaging and funding efforts that focus on permanent solutions for homeless people. And new research and imaginative policies at the state and local level are paving the way. Taken together, these efforts represent a nationwide effort to end homelessness. How will we know if these efforts are successful? This report lays the groundwork for measuring efforts to end homelessness by establishing a baseline number of homeless people from which to monitor trends in homelessness. We use local point-in-time counts of homeless people to create an estimate of the number of homeless people nationwide. As with all data, the counts included in this report are not perfect and have numerous limitations, but they are the best data available at this time. In January 2005, an estimated 744,313 people experienced homelessness. 56 percent of homeless people counted were living in shelters and transitional housing and, shockingly, 44 percent were unsheltered. 59 percent of homeless people counted were single adults and 41 percent were persons living in families. In total, 98,452 homeless families were counted. 23 percent of homeless people were reported as chronically homeless, which, according to HUD's definition, means that they are homeless for long periods or repeatedly and have a disability. A number of states had high rates of homelessness, including Alaska, California, Colorado, Hawaii, Idaho, Nevada, Oregon, Rhode Island, and Washington State. In addition, Washington, DC had a high rate of homeless people. These statistics show that far too many people are homeless. There is, however, reason for optimism. During the past five years, community approaches to homelessness have changed and thousands of people are working toward the shared goal of ending homelessness. Measuring their success or failure will depend on collecting and analyzing outcome data, monitoring changes in homelessness populations, and understanding which interventions lead to different outcomes. Yet, up until now, we had no recent data on how many people are homeless in the United States. The data in this report represent the first effort to count homeless people nationwide in 10 years. We hope to make this report an annual report, tracking progress on the efforts to end homelessness nationwide. It is our belief that what gets measured, gets done.