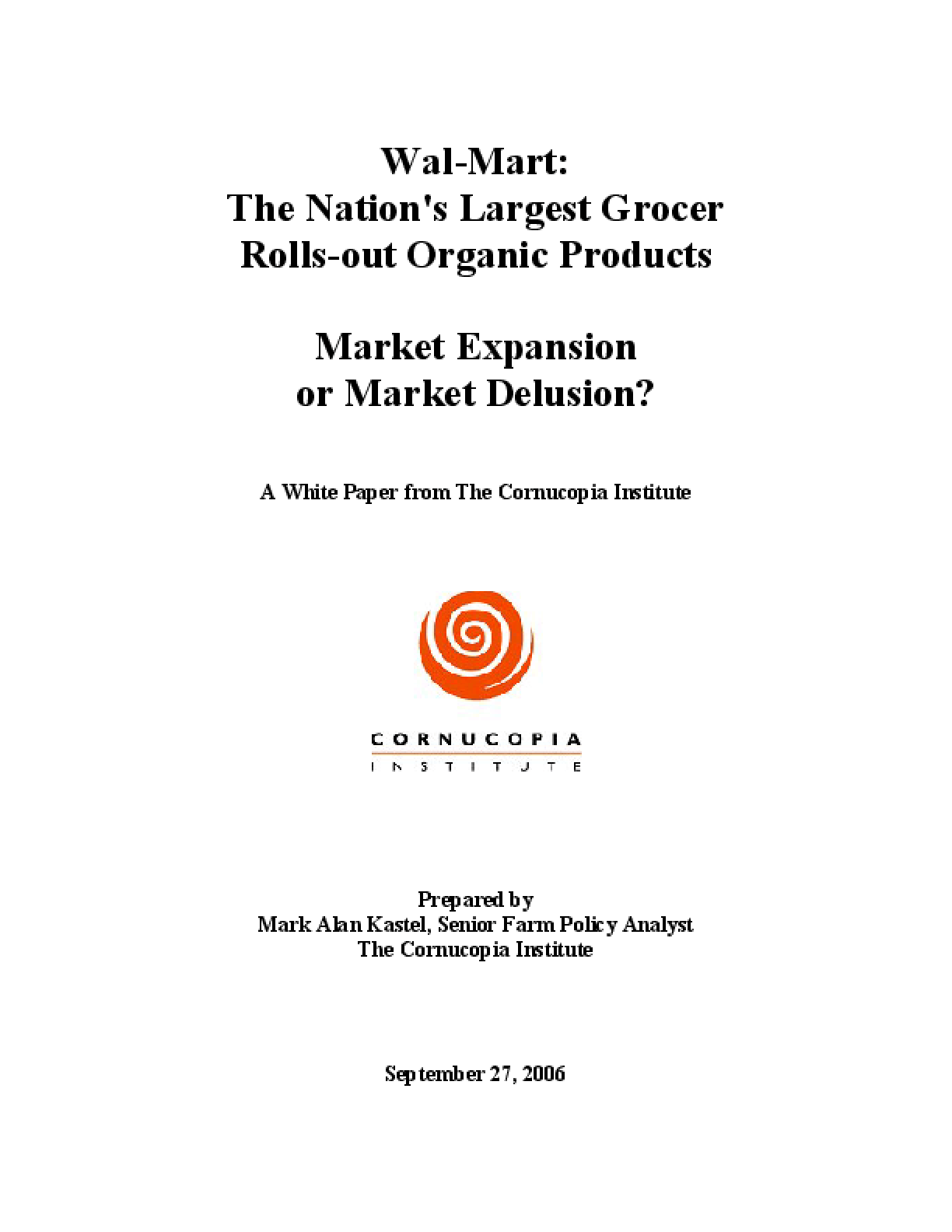 This spring's announcement by Wal-Mart Stores, Inc., that it would dramatically expand its product offerings of organic food has left many organic industry officials and consumers questioning the corporation's likely impact. If Wal-Mart applies its economy of scale and logistical prowess to the organic sector it will likely create a more competitive pricing environment, benefiting consumers, and greatly increasing the accessibility of organic products. Consumers would be big winners while retail competitors and distributors would need to carefully analyze and improve their practices and lower their costs. And the increased demand for organic food would likely bode well for agricultural producers, at least in terms of sales volume. However, if the giant corporation instead decided to apply its traditional business model to organic food, Wal-Marting the marketplace, all existing entities, which have been part of building this market niche into a vibrant $16 billion industry, would likely lose. And much of the basis behind consumers' loyalty to the organic label, illustrated not only by growth but by extremely limited resistance to historic super-premium pricing, might be lost in the transition. This report is an initial analysis of Wal-Mart's early organic marketing practices. It already appears that the corporation has chosen the latter strategy -- partnering with the nation's largest agribusiness concerns to invent an alternative to the existing organic movement -- "corporate organics." This competitive challenge has the potential to destroy healthy markets for other retailers, distributors, manufacturers/processors, and family-scale domestic farmers. It seems clear that in addition to Wal-Mart's logistical strength, their low-price goal for organic food (10% over conventional) is based to a great degree on sourcing products from major agribusiness (with little or no history of manufacturing organic food), foreign sources, and domestic industrial-scale farms. The worst-case scenario for the organic industry is for Wal-Mart to first destroy competition, as it has a history of doing in so many other market segments, and then create an abbreviated product line that ignores the ethical expectations of consumers. Will organic sales continue to flourish at the historic premium prices (even Wal-Mart prices are high compared to conventional food) if consumers no longer feel that their premium dollars are supporting superior food quality and environmental practices, humane animal husbandry, and economic-justice for family farmers? Data was gathered for this report by visiting Wal-Mart's "laboratory" store in Plano, Texas, and other Wal-Mart Supercenters in Wisconsin and Colorado. Industry officials, including Wal-Mart suppliers, were also interviewed. In addition, price comparisons were made between a natural foods specialty retailer, a traditional grocer, a warehouse grocer, and Target and Wal-Mart stores in a modest-sized Midwest city. 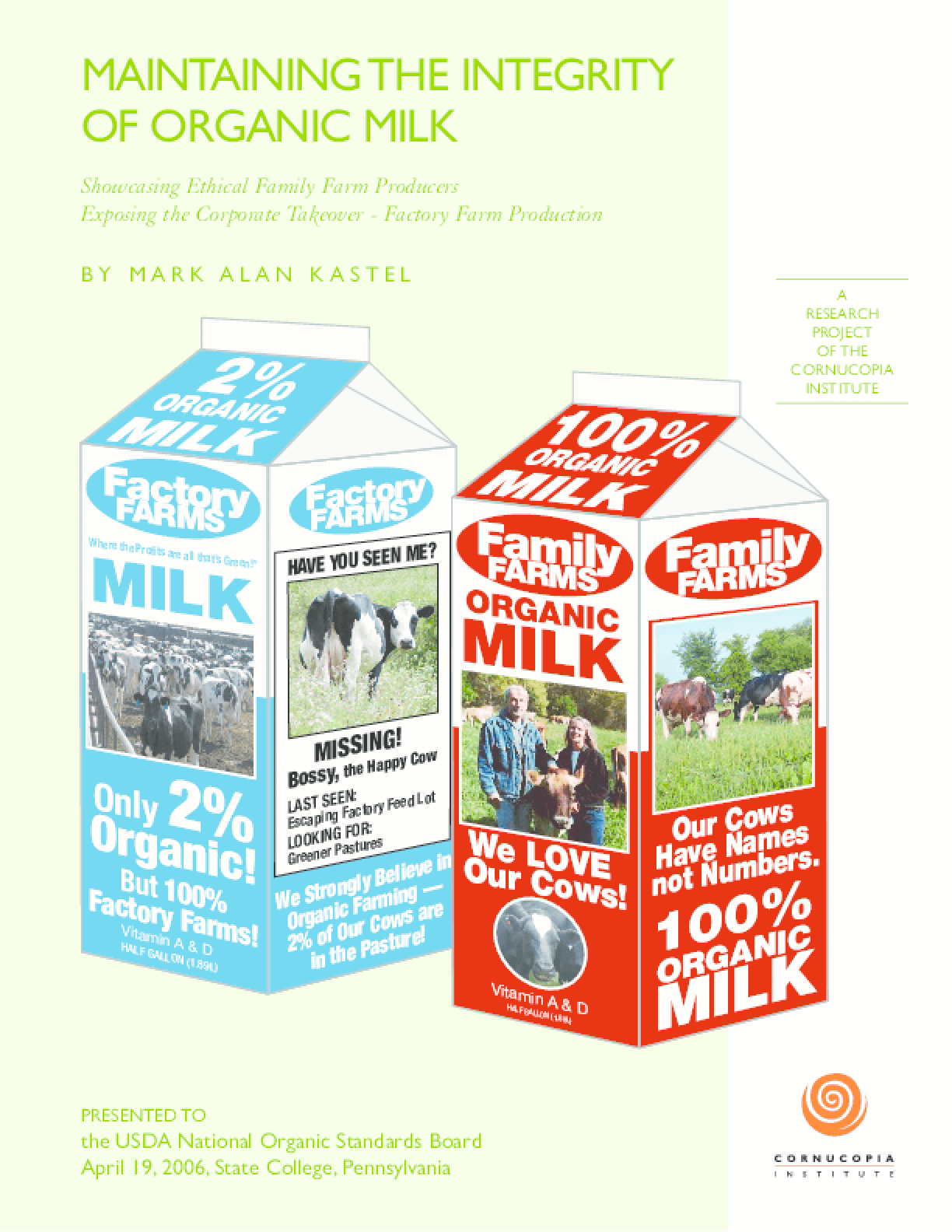 Maintaining the Integrity of Organic Milk

The meteoric growth of organic dairying is one of the rare success stories found in agriculture today. The business has been built over the past two decades and nurtured by family farmers collaborating with consumers hungry for organic food. For those farmers involved in dairying, organics has been a true lifeline. Those able to make the difficult three-year transition to organics have been rewarded by top commodity prices at the farmgate and a living wage -- something that stands in stark contrast to the intense price squeeze that has driven many of their conventional neighbors from the business. In addition, organic dairy farmers are enjoying explosive growth in demand for their products. Consumers have been willing to pay premium prices in the market for certified organic dairy products with the understanding that the food has been raised in a sustainable, environmentally sound manner and that they are helping support and keep family farmers on the land. Many consumers assume that humane animal husbandry practices are employed by organic farmers and they may believe that their food is more nutritious. Organic dairy products are also a "gateway" food to other organic products. Consumers recognize such familiar products as milk and cheeses, frequently sampling organic varieties first before moving on and experimenting with other organic commodities. But this success story is now at risk; it is threatened by powerful economic interests that covet their share of the organic pie and who are willing to twist, manipulate and even ignore federal organic regulations in their rush to cash in. Some agribusiness giants are depending on consumers not knowing the difference between their product and those produced with ethics and integrity. This report aims to pull back the veil and allow consumers to easily identify those organic dairy products that have been produced with the best organic practices. By using the Web-based rating tool found on our Web page (www.cornucopia.org), you will be able to identify the brands and products found in your region and examine their ranking, score, and how well they meet key criteria covering organic management practices. The survey rates 68 different organic dairy brands and private label products found across the country. The good news that we can report is that the vast majority of all name-brand organic dairy products are produced from milk from farms that follow accepted legal and ethical standards. However, consumers should also recognize that an increasing amount of milk used in certain organic dairy products is coming from factory farms that are employing suspect practices that skirt organic regulations and impact nutrition and livestock. A growing number of new factory farms -- housing thousands of cows in confinement conditions -- are in development because of strong organic commodity prices, growing consumer demand, a shortage of certified organic milk, and a reluctance by federal regulators to enforce the current organic rules. This report will help consumers make purchasing decisions separate from industry chaff and PR.