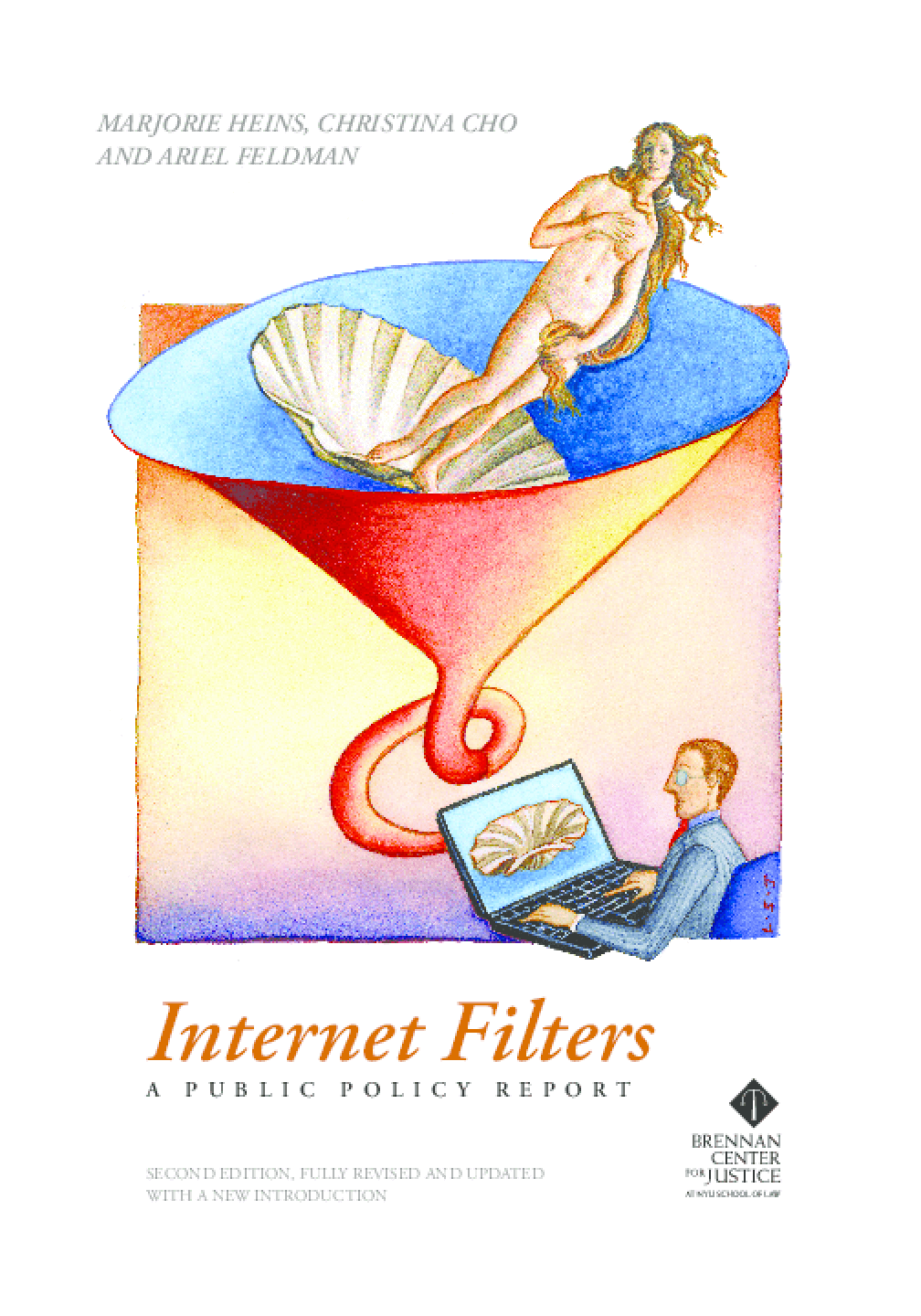 No sooner was the Internet upon us than anxiety arose over the ease of accessing pornography and other controversial content. In response, entrepreneurs soon developed filtering products. By the end of the decade, a new industry had emerged to create and market Internet filters....Yet filters were highly imprecise from the beginning. The sheer size of the Internet meant that identifying potentially offensive content had to be done mechanically, by matching "key" words and phrases; hence, the blocking of Web sites for "Middlesex County," or words such as "magna cum laude". Internet filters are crude and error-prone because they categorize expression without regard to its context, meaning, and value. Yet these sweeping censorship tools are now widely used in companies, homes, schools, and libraries. Internet filters remain a pressing public policy issue to all those concerned about free expression, education, culture, and democracy. This fully revised and updated report surveys tests and studies of Internet filtering products from the mid-1990s through 2006. It provides an essential resource for the ongoing debate. 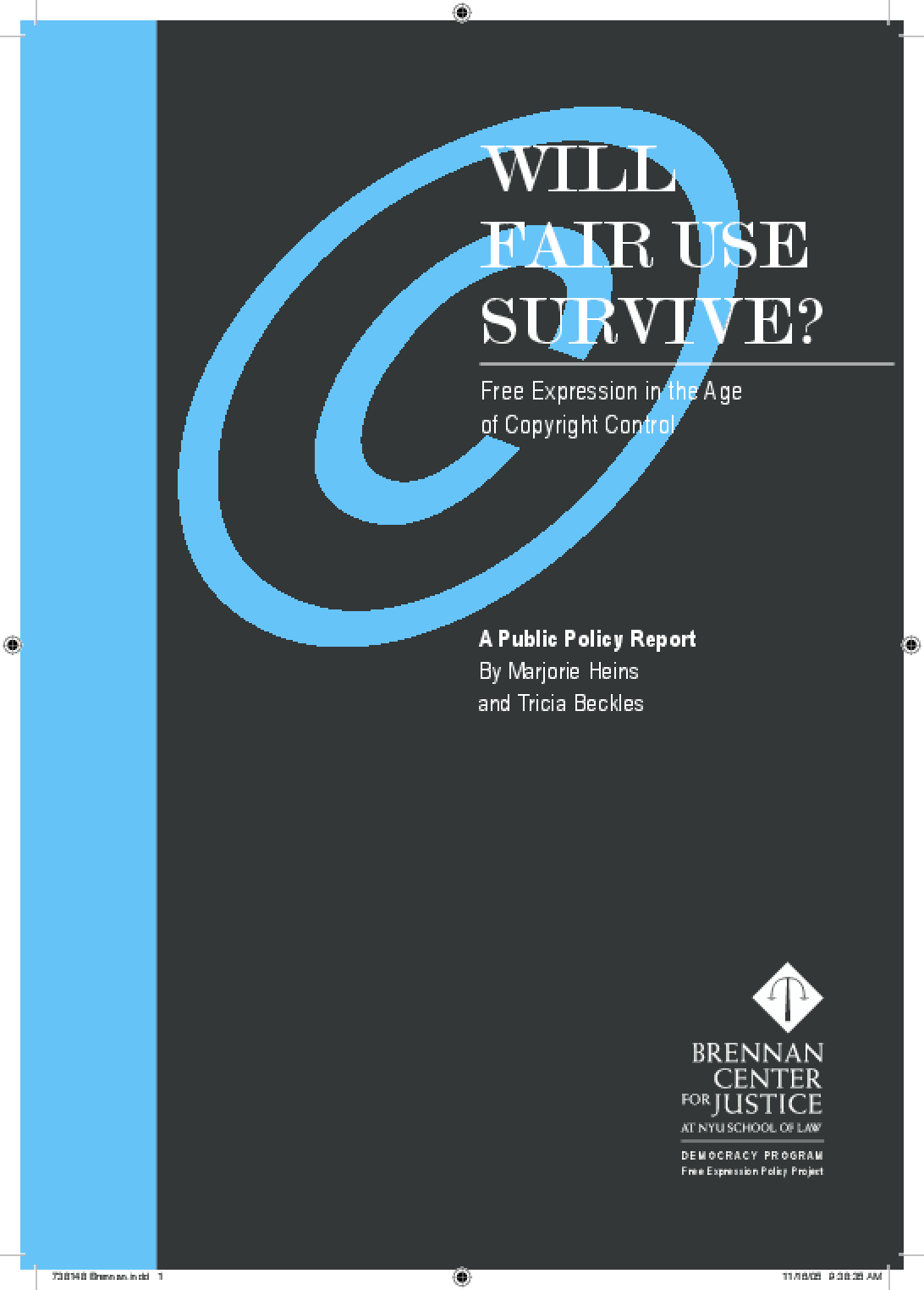 Will Fair Use Survive? Free Expression in the Age of Copyright Control

"Fair use" is a crucial exception to "intellectual property" controls - it allows users to publish, distribute, or reproduce copyrighted or trademarked material without permission, for certain purposes. But extensive research, including statistical analysis and scores of firsthand stories from artists, writers, bloggers, and others, shows that many producers of creative works are wary of claiming fair use for fear of getting sued. The result is a serious chilling effect on creative expression and democratic discussion.Several factors must be considered in deciding whether a use of copyrighted material is "fair." Four factors identified in the copyright law are: 1) the purpose and character of the new work; 2) the nature of the original work; 3) the amount and substantiality of the original work that was used; and 4) the effect of the new work on the market for the original. Examples of fair use are criticism, commentary, news reporting, scholarship, and "multiple copies for classroom use." "Will Fair Use Survive?" suggests the need for strengthening fair use so that it can be an effective tool for anyone who contributes to culture and democratic discourse. The report finds: Artists, writers, historians, and filmmakers are burdened by a "clearance culture" that ignores fair use and forces them to seek permission (which may be denied) and pay high license fees in order to use even small amounts of copyrighted or trademarked material.The 1998 Digital Millennium Copyright Act (the DMCA) is being used by copyright owners to pressure Internet service providers to take down material from their servers on the mere assertion that it is infringing, with no legal judgment and no consideration of fair use.An analysis of 320 letters on the Chilling Effects website, an online repository of threatening cease and desist and "take down" letters, showed that nearly 50% of the letters had the potential to stifle protected speech. Report Highlights:The giant Bank of America sent a threatening letter to a small ceramic piggy bank company called Piggy Bank of America, claiming its use of the name was a trademark violation.A "planetary enlightenment" group called Avatar consistently suppressed online discussion group postings critical of its program by using DMCA "take down" letters.MassMutual sent a cease and desist letter to the gripe site "MassMutualSuks.com," claiming trademark infringement.Mattel sued artist Tom Forsythe for his series of "Food Chain Barbies," acerbic commentaries on Mattel's role in perpetuating gender inequality. Only after a long, bruising court fight did Forsythe win the right to parody Barbie.The report recommends: creating a clearinghouse for information, including sample replies to cease and desist and "take down" letters; outreach to Internet service providers who are instructed by companies to take down sites with material they claim as copyright-protected; changes in the law to reduce the penalty for guessing wrong about fair use; and the creation of a national pro bono legal support network.On December 15, 2005, Representatives Rick Boucher, Zoe Lofgren, and John Doolittle circulated a "Dear Colleague" letter praising the report for explaining why fair use "is a crucial part of our copyright law," and why legislation is needed to secure fair use rights in the digital environment. 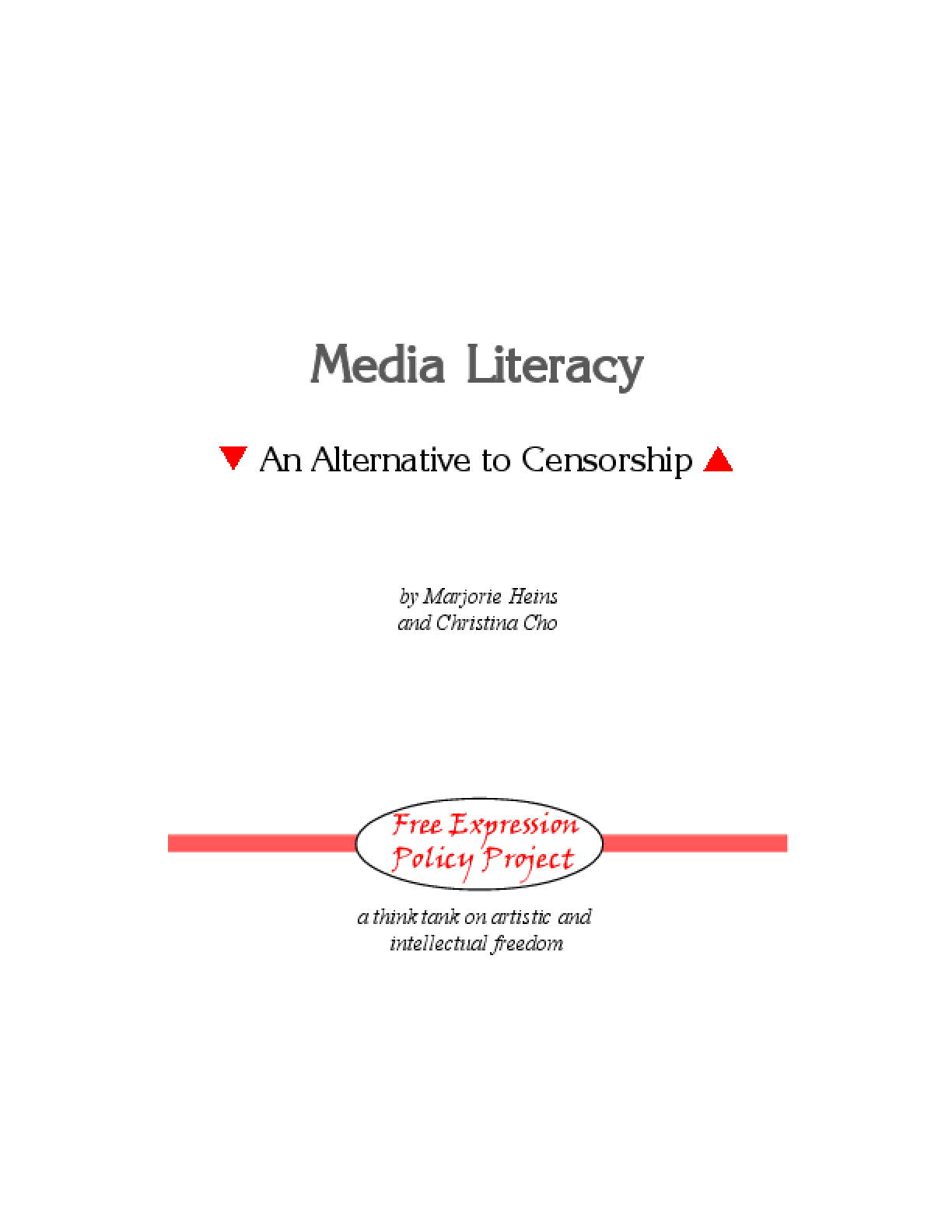 Media Literacy: An Alternative to Censorship

Media literacy education has come a long way since the 1970s, when the first "critical thinking" courses were introduced in a few American schools. Most educators today understand that with the revolutionary changes in communication that have occurred in the last half-century, media literacy has become as essential a skill as the ability to read the printed word. Equally important, media literacy education can relieve the pressures for censorship that have, over the last decade, distorted the political process, threatened First Amendment values, and distracted policymakers from truly effective approaches to widely shared concerns about the mass media's influence on youth. 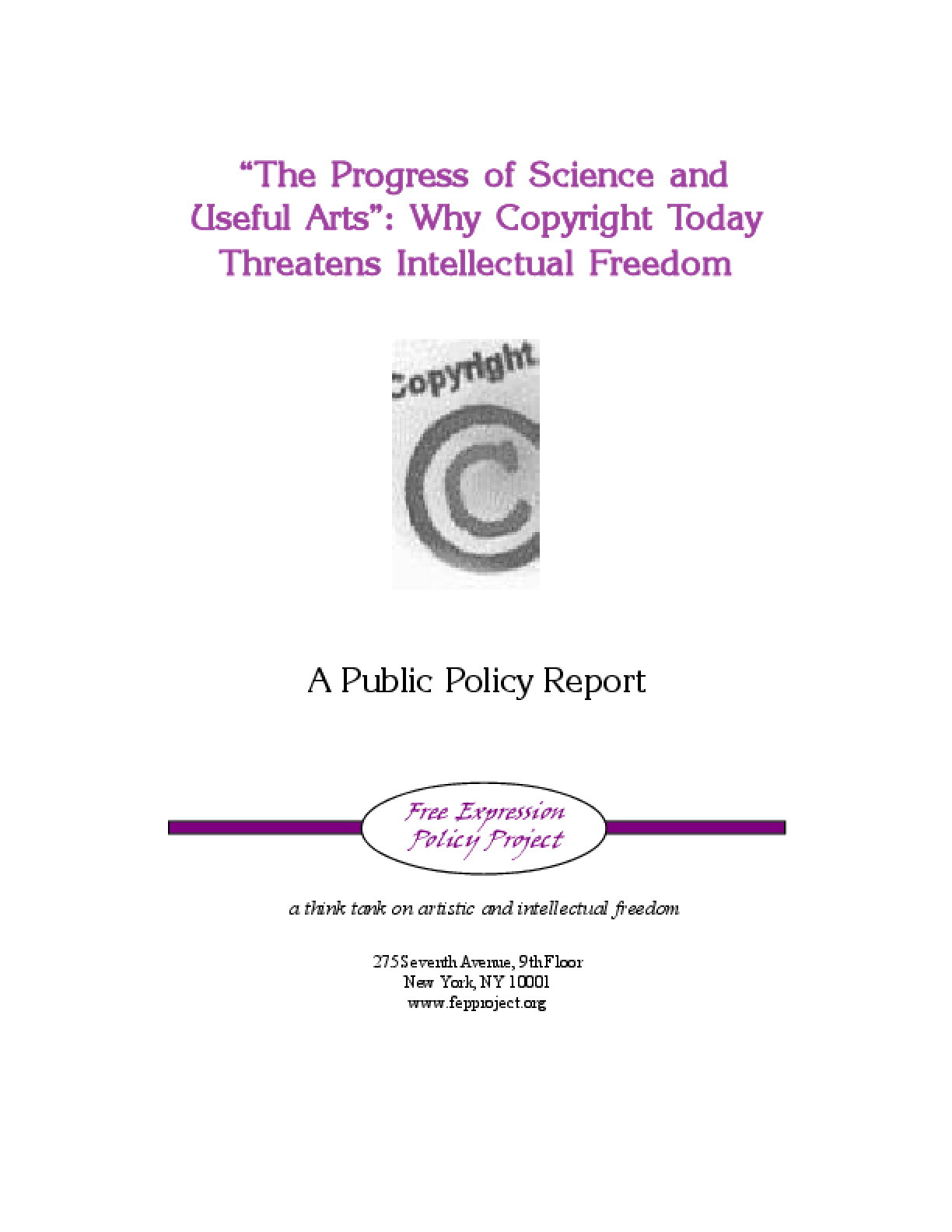 The Progress of Science and Useful Arts: Why Copyright Today Threatens Intellectual Freedom 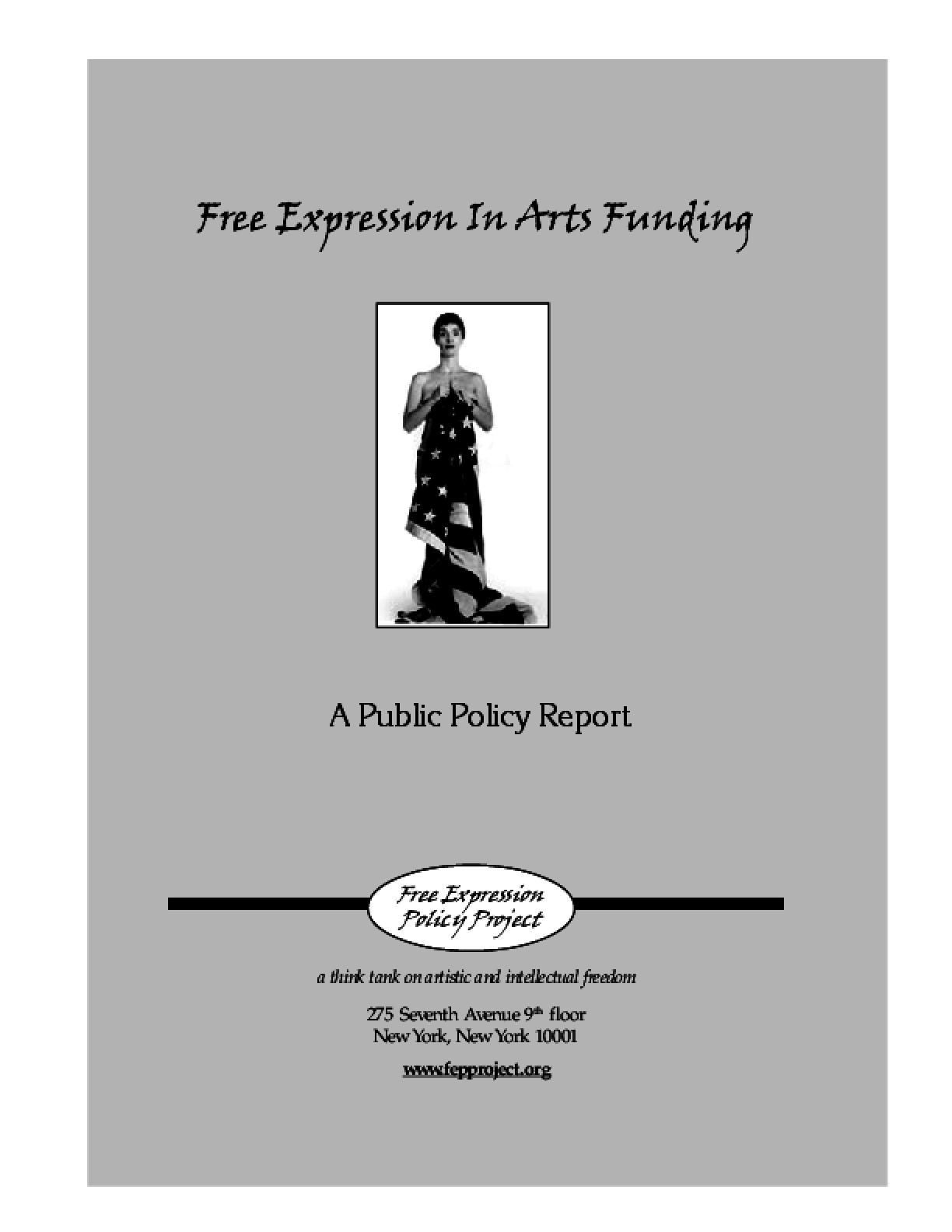 The result of almost two years of research, this report surveys free expression policies among state and local arts agencies, including procedures for anticipating and handling controversy. Its purpose is to provide the arts community, as well as others interested in censorship or cultural policy, with solid research that will enable grant-making agencies to take a principled stand on artistic freedom without alienating their audiences or losing their funding. The report includes candid interviews with agency officials regarding funding disputes, political accountability, and most important, ways of reaching out to communities and opening up dialogue about challenging or provocative art. The report also contains extensive background on the "funding wars" of the 1990s, illustrations, and two appendices summarizing free expression statements and policies among all state arts agencies and a random sample of local agencies.As the Executive Summary points out, despite America's recent history of attacks on controversial art, artistic freedom in the context of public funding remains a critical issue. The ability to make challenging art that can explore all facets of the human condition, including unpleasant ones, is essential to a vibrant culture and a healthy democracy. Neither private philanthropy nor the mass media conglomerates that dominate commercial entertainment can be counted upon to support the give-and-take of diverse viewpoints, reflected through literature, theater, music, film, and other visual art, or to provide visibility for the multi-layered, varied, and inventive cultures of America.